Fight Introduction: Keep an eye out for Jordan Espinosa 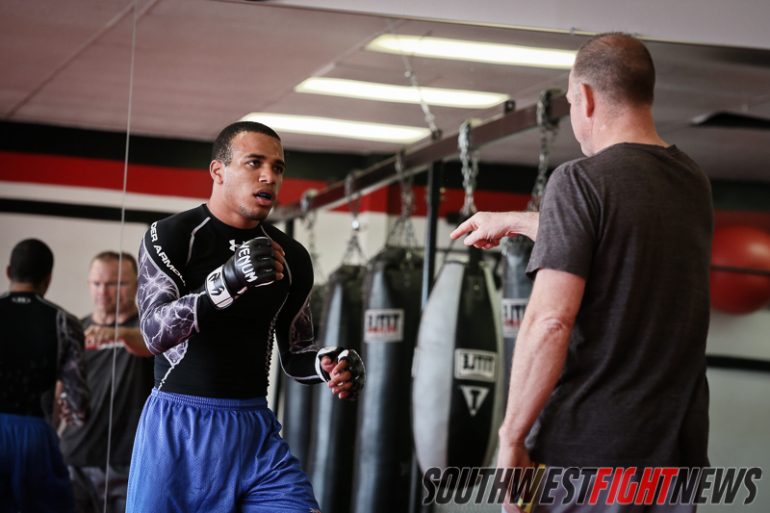 When you train in New Mexico for combat sports, it is easy to fly under the radar and become slightly overshadowed by the high volume of talented fighters being housed in our state. Each prominent local gym is lined with talented, hardworking individuals and it becomes nearly impossible to stay focused or remain current with one single individual. With that being said, it is only a matter of time before one of these individuals sparks some intrigue and is on the verge of standing out from the pack.

Jordan Espinosa (2-0 professional) has a chance to capture that spark this weekend on Saturday, May 4th in Cleveland, Ohio.

Fighting for the Rocktagon Worldwide promotion, Espinosa will be facing Jiu Jitsu specialist Andrew Cseh (4-3) who fights with the Modern Vision Mixed Martial Arts School and will be making the journey from Ontario, Canada. Espinosa represents the Mean 1 MMA gym in Rio Rancho headed by Coach Chris Luttrell. The win would instantly put Espinosa on radars as well as alert the New Mexico fight fans that we indeed have another name to watch out for.

However, with Espinosa there is more than what meets the eye.

While being blessed with physical gifts and having the look of athlete, Espinosa worked for an Ohio based company in the IT department in the summers of 2010 and 2011 and in that time he found MMA. While working towards his degree and a possible career in that field of work, he stumbled into Demolition Fight Team. The gym was headed by Gary Young and through that experience; Espinosa was introduced into the idea of competing in MMA.

While attending West Mesa High School, Espinosa was a very successful wrestler. The explosively athletic Espinosa won a state title as a sophomore, placed third as a junior, and second as a senior. He brings in a very solid wrestling pedigree into a sport that has that discipline front in center as a staple of success for young fighters.

Espinosa also brings experience, not in the sense of years but in the context of being around a lot of solid gyms. Aside from the Ohio gym, Espinosa has spent time with the talented striking coach Ray Yee of Albuquerque Kickboxing Academy, the dominating wrestling coach Lenny Lovato of Lovato’s Total Fitness and currently trains out of the Jackson-Winklejohn gym that houses several top coaches including Brandon Gibson, Mike Valle and of course Mike Winklejohn.

Training at the Jackson-Winklejohn gym opens up so much opportunity as the training partners do not get any tougher or come with any more experience. In fact, Espinosa moved in with the very well known Damacio Page who was a former WEC title contender. With Page serving as a “big brother” type of role model to Espinosa, it should come as no surprise that Espinosa is climbing up the ranks towards top prospect levels. Keeping his perfect career record is the first step towards that Saturday night.

The fight itself comes a little over one year since Espinosa’s last bout. Busy adding a degree to his career achievements, Espinosa is now back and ready to divert his focus back to MMA. In two career professional bouts, submissions have been the method of victory for the young fighter.

In just two days, Espinosa will compete for Rocktagon XXVI in an event labeled “Veni, Vini, Vici” which will be held in The Agora in Cleveland, Ohio. The clever event title is translated from Italian meaning “I came, I saw, I conquered” and Espinosa will have that chance to do just that. Espinosa will have to battle some adversity as he usually competes at the 125-pound Flyweight class and will take this fight heavy, at the bantamweight 135-pound level.

Stay tuned to SWFight.com fight fans for result updates and post fight breakdowns and analysis. SWFight.com sends our best wishes with Espinosa in his trip to Ohio and urge fight fans to support a local in his MMA endeavors.

Pancrase Card Featuring Nakai vs Gonzales to be on iPPV

Mary McGee Plans to Beat Holly Holm Back Into Boxing