Donald Cerrone faces off with K.J. Noons at UFC 160 with divisional relavence on the line 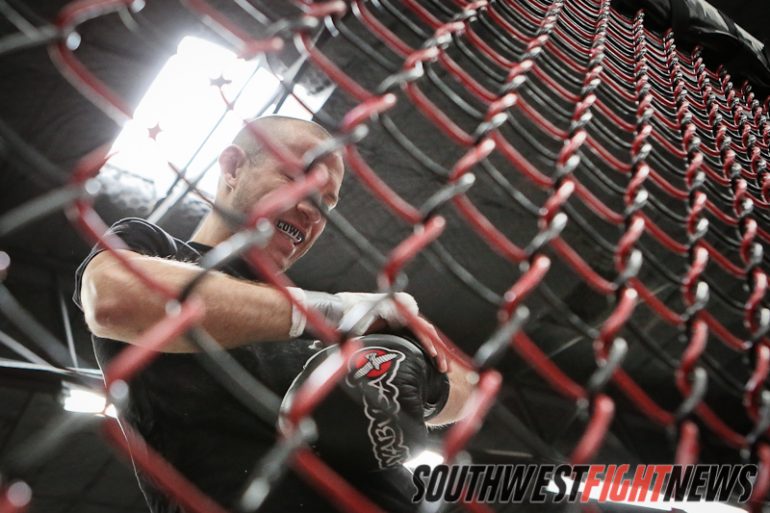 On Saturday May 25th, Albuquerque will be sending off two fistfuls of dynamite into the MGM Grand Garden Arena for UFC 160. Jackson-Winklejohn product Donald “Cowboy” Cerrone (19-5) will be taking his exciting kickboxing into the octagon to face off against Strikeforce standout K.J. Noons (11-6).

The accolades speak for themselves; Donald Cerrone brings it when he enters in the cage for competition.

Standing in the way of Cerrone’s next win inside the UFC is K.J. Noons who just recently made his promotional debut. Noons is noted as being a former professional boxer who made a name in the Strikeforce promotion by beating Yves Edwards and Nick Diaz. In his professional victories, Noons has a career 73% knockout rate indicating that like Cerrone, he brings his top talents to the cage each and every time.

The two fighters have styles that contrast very well for fight fans. Noons is a speed oriented boxer who relies on technical head movement and razor fast and crisp counter punches often fighting from inside the striking range. Cerrone has a Muay Thai style that favors fast, stinging leg kicks and a vast array of strikes from knees to elbows. While he is often aggressive in his attack, Cerrone has shown his ability to diligently pick an opponent apart from distance.

Noons is a crafty veteran who knows how to get inside and Cerrone is a lengthy, athletic fighter enjoys sizeable reach advantages in most fights due to his long limbs and ability to use that length effectively. The difference in the fight may come down to that scenario as to whether Noons can fight his fight or if Cerrone will dictate the pace and style of the fight.

This fight holds considerable relevance for both fighters for completely different reasons. While both are coming off of losses, they stand at two entirely different career points. Noons just lost a controversial split decision to Ryan Couture in January and adding that to the fact he has lost four of his last five, Noons may be staring at a “must-win” scenario where he may be on the short list to be cut by the UFC with another loss.

Cerrone is still ranked as the #8 lightweight in the UFC despite losing his last bout to now top Featherweight contender Anthony Pettis also back in January. Cerrone has faced off with several top contenders over the years on a list that includes former WEC/UFC Champions Jamie Varner, Ben Henderson and Anthony Pettis and top contenders Melvin Guillard, Nate Diaz and Dennis Siver.

Irregardless of his impressive resume, Cerrone has come up just slightly short in his bouts with title implications. While this fight doesn’t award the winner divisional title contendership, a win here validates his status as a top contender and keeps him from a two-fight losing streak. Losing two fights in the UFC’s 155-pound division is rough to bounce back from and losing to Noons diminishes title implications in the short term for Cerrone.