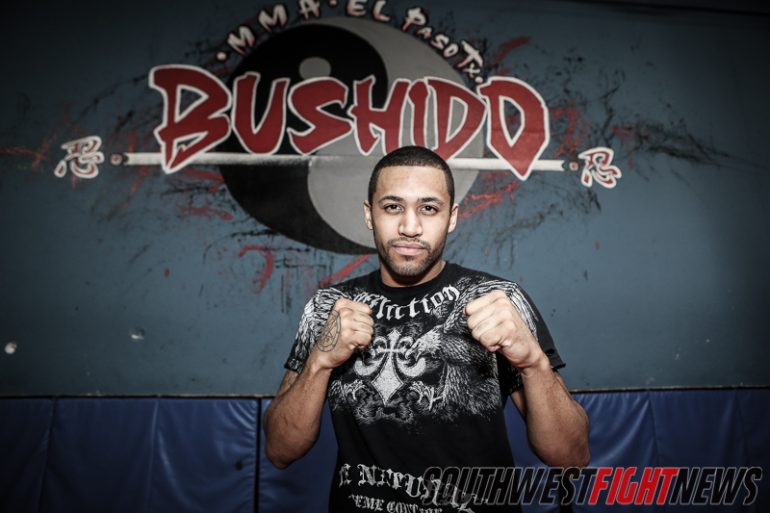 A big fight featuring two young talented fighters from the Southwest, is scheduled for May 25th just south of the border. Jackson-Winklejohn product Andres Quintana (4-1), will put his four fight win streak on the line when he faces off with Brian Castillo (2-2) of El Paso’s Bushido MMA, who has a two fight win streak of his own to protect. The two will be competing at the 145-pound Featherweight limit in the main event of card dubbed “Mexican Stand Off” under the Chinaco MMA Mexico promotion. The fight will be held in Juarez, Mexico inside the Gimnasio de Josue Neri Santos and will cap off a night scheduled to have seven pro fights. The card is also billed to have a guest appearance from former UFC fighter Keith “The Dean of Mean” Jardine.

Quintana, is slowly becoming a household name amongst fans of New Mexico’s

regional scene. “Bullet” has been spectacular in his performances, most recently enjoying success from a tremendously impressive victory back in February on the Bellator 91 undercard. Quintana can take that momentum with him when he travels south next week.

Castillo may not have the recognizable name that Quintana does but rest assure he is one of the toughest young fighters from our regional scene. Having dropped his first two professional bouts, Castillo has come back strong winning his last two in just over seven minutes combined. Quintana will not be Castillo’s first opponent from Albuquerque, as the Bushido MMA product submitted Albuquerque Kickboxing’s Freddie Crosby in a King of the Cage event held in Santa Fe.

The fight is a huge opportunity for both Quintana and Castillo. Despite the event being “low key”, Quintana will headline the event in a new area where his performance will allow him to gain an even broader fan base. His fan base in New Mexico is already growing rapidly and the main event experience will be something not many athletes at Quintana’s age are able to experience.

“I’m excited and feel very honored to be headlining a card especially in another country,” said a very soft spoken and humble Quintana. “It motivates me as I know all eyes will be on me. I haven’t felt too different getting ready to travel to Mexico yet. I’m sure that will change when I arrive in Mexico though.”

For Castillo, the opportunity to right the ship and get back on the winning side of his record sits on a very clear path. Defeat the well known Quintana and not only get his record on the right side of .500 but also gain immense popularity in the New Mexico and Texas region for defeating a fighter whose last bout was under the Bellator banner.

The match up is an intriguing one for several reasons. On paper the two fighters come from very different sides of the train tracks in terms of training camps. Quintana represents the world renowned Jackson-Winklejohn gym where it is hard to find a better group of training partners and coaches. Castillo trains out of the Bushido MMA gym in El Paso and while it is not the recognizable gym the Jackson-Winklejohn gym is; Bushido MMA’s gym is amongst the most reputable and respected camps in the region. The gym is home to several extremely talented fighters having put together a 26 win and 2 loss record overall last year. Both gyms bring in considerable success while being vastly different in popularity and both fighters will assuredly come into the fight off of successful training camps.

In terms of the in-cage match up, this fight brings a bit of an exciting back story. Quintana and Castillo have already fought, a few years ago the duo squared off as amateurs. Now professional fighters, Castillo and Quintana will once again meet in the middle of the cage. In their first match up, Quintana would jump up ten pounds to compete in the 155-pound Lightweight division against Castillo and would win by triangle choke.

Both fighters have improved and progressed as martial artists since the fight and the fight may be favored to the one who will come in the most improved and prepared since their initial meeting. The fight lasted only a few moments and saw both fighters slug it out until Castillo scored a takedown. Quintana would work off of his back securing the fight ending choke.

Castillo is confident that his progression as a fighter will make an impact May 25th, telling SWFight.com what he felt is the biggest difference between the first bout and the upcoming one and it is quite simple and to the point, “I actually have a ground game now and I am training full time as opposed to last time where I just trained here and there and relied on my natural talent.”

Quintana is a crisp, technical striker and will look to score with his highly effective punches and kicks. Extremely durable, Quintana is successful defending takedowns and really pushing a high pace. Castillo has shown in recent bouts that his refocus and dedication has provided solid composure while using his natural talents. His calm composed style has been efficient at finding openings and scoring with an array of kicks. He is also dangerous on the ground now that he has put the training time into grappling, shown best when Castillo finished opponent Freddie Crosby with a rear-naked choke in just over two minutes.

Will Quintana come out on top once again over Castillo? Will Castillo make the necessary adjustments to get even with Quintana, this time in the professional ranks? Is Quintana’s technical striking too much to handle or will Castillo’s re-focus and motivation going to be the key in the match up? We will find out on May 25th at the Chinaco MMA’s “Mexican Stand Off” event.

Undoubtedly, the two will showcase to the Juarez crowd what our region’s MMA scene is all about and if the finishing ratios of each fighter is any indication of the possible bout conclusion, those in attendance are in for a treat. Stay tuned for fight results and post-fight coverage. We encourage fight fans to send their support with Andres and Brian in what is shaping up to be a huge night for both young fighters.

Brian Mendoza Moves On To Quarterfinals of 2013 National Golden Gloves

Brenda Gonzales vs. Rin Nakai Weigh In Video for Pancrase 247