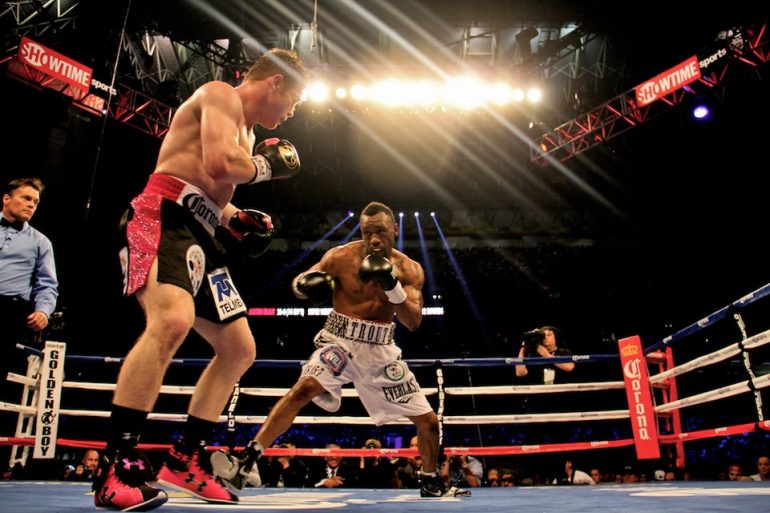 According to Austin Trout’s strength and conditioning coach Shukree Shabazz, Trout suffered a sprained left ankle during his contest Saturday night against Saul “Canelo” Alvarez. The injury came in the seventh round when Trout was knockdowned down by Alvarez with a straight right. As he attempted to keep his balance Trout rolled his left ankle.

“He didn’t complain about it in the corner,” says Shabazz. “We didn’t notice it until the following day when it was swollen on both sides.”

Trout is expected to visit a doctor in his hometown of Las Cruces, New Mexico to get a diagnosis on the foot.

Despite this Trout was actually busier in rounds 7-12 throwing 419 punches compared to 350 thrown in rounds 1-6. As a southpaw Trout uses the left foot to generate power for his shots.

The ring was extremely soft Saturday night in San Antonio, Texas. A complaint was filed to the Texas Commission by Trout’s trainer Louie Burke well before the contest even started. Alvarez also brought up the fact of how soft the ring was, saying it impeded his footwork during his post-fight press conference interview.

Two Jackson-Winklejohn fighters featured on UFC 159 undercard, both sitting at significant points in their career