Triple-A-MMA: “Win to get in” delivers 11 action filled bouts on a Sunday afternoon 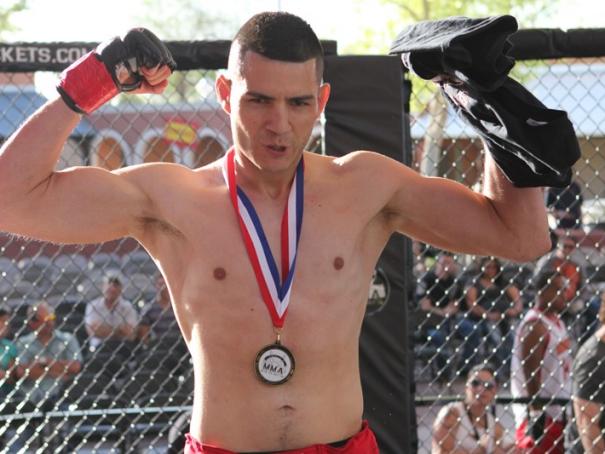 Triple-A-MMA: “Win to get in” on the surface level was a very unorthodox show. It was uncommonly held on a Sunday, in the middle of the day and in an outdoor venue that isn’t associated with MMA events. Regardless of the uniqueness to the show, it did however have one common trait that it shared by most of our states other MMA shows.

The Triple-A-MMA debut show was greeted by nice weather and a crowd full of animated and enthusiastic fight fans. From the first bout to the final bell of the main event, there was plenty of cheering as the event provided plenty of reasns to get out the chairs for. The event featured 11-fights and ended up showcasing ten finishes in those fights. TKO’s were in an abundance Sunday afternoon.

The Mean 1 MMA gym from Rio Rancho made their mark at the event sending six competitors into action and ending the night 4-2. While the gym started off rocky at 1-2 in the undercard bouts, the main card professionals went undefeated at 3-0.

The lone amateur win for Mean 1 MMA was a 15-second slugfest between Max Spiller and Judgement MMA’s Jesse Sandoval. The two 145-pound amateurs met in the middle of the cage and started slugging it out, fifteen seconds into the firefight, Spiller landed a clean power hook that wobbled Sandoval and another dropped him to the mat. Sandoval landed of the mat flat on his face and the referee had no choice but to stop it as he was defenseless. It was the nights quickest fight and in those fifteen seconds, arguably the most exciting as well.

Teammates Javier Palacios and Steve Garcia came out on top over opponents Steven Ortega and Allen Lerma. Palacios pushed a very grueling and smothering pace over the course of three rounds and won the unanimous decision in what ended up being the lone fight to hit the judges scorecard. Garcia pushed a similar pace and was able to earn the referee stoppage in the third round.

In the night’s main event, Felipe Chavez returned from more then three years of inactivity to match up with Lovato Total Fitness fighter Ronnie White. While Chavez would finally get back into the cage, he didn’t rack up much cage time as the fight would last under two minutes. While White showed his willingness to pressure Chavez, he would eventually find himself in a triangle choke that Chavez would lock on and adjust for what seemed like a full minute. Despite escape attempts White would submit and Chavez would end his MMA hiatus with the victory. He is expected to compete for Bellator MMA later this year.

While White didn’t come out with the win, several of his teammates from Lovato Total Fitness went home with solid victories. Heavyweight Tuuga Pleasant defeated Judgement MMA heavyweight Rich Torres by TKO in the second round in what was a back and forth affair.

Steven Cervantes out of the Lovato’s gym may have put on the afternoon’s most impressive performance defeating undefeated amateur Falon Ring of Mean 1 MMA. Cervantes stifled all of Ring’s technical Jiu Jitsu with very solid posture, positional wrestling and high fighting IQ. Cervantes would repeatedly score from top position and in the second round would land a leg kick that buckled Ring and followed up with a head kick to earn the referee stoppage.

Judgement MMA went 2-2 for the afternoon but scored big in those two victories. The powerful striking of John Rozema notched the TKO victory in under a minute after opponent Thomas Mills from Perez Fighting Systems attempted to close the distance avoiding Rozema’s power. As soon as there was an opening, Rozema landed solid and sent Mills to the ground where some ground and pound forced the stoppage in the events first fight.

The feature attraction on the undercard came in the afternoon’s lone Woman’s MMA bout. Judgement MMA’s Amanda Lovato (http://www.awakeningfighters.com/athletes/amanda-lovato/) would score the victory in her first MMA bout that happened to also fall on her birthday. The aggressive Lovato pushed the pace from the opening bell while defending the takedowns of opponent Malia Yee of Albuquerque Kickboxing Academy. While Yee was able to score multiple takedowns, Lovato worked her way to the feet each time until a scramble enabled her to get to mount where her pressure would overwhelm Yee and she’d succumb to Lovato’s high volume attack leading to the referee stoppage in the first round.

The afternoon’s event was a fun one, providing all facets of MMA from striking to grappling, knockouts to submissions. The debut event came back strong after some early hang ups that pushed the start time later then expected. Once the show started, the hiccups stopped and delivered action to all those in attendance.

Stay tuned to SWFight.com for more post event analysis as well as all of your local New Mexico MMA news, fight breakdowns and fighter introductions. We thank all the fight fans who turned out to support the twenty two fighters and their gyms and wish all competitors the best of luck in their future endeavors.

Pancrase Card Featuring Nakai vs Gonzales to be on iPPV