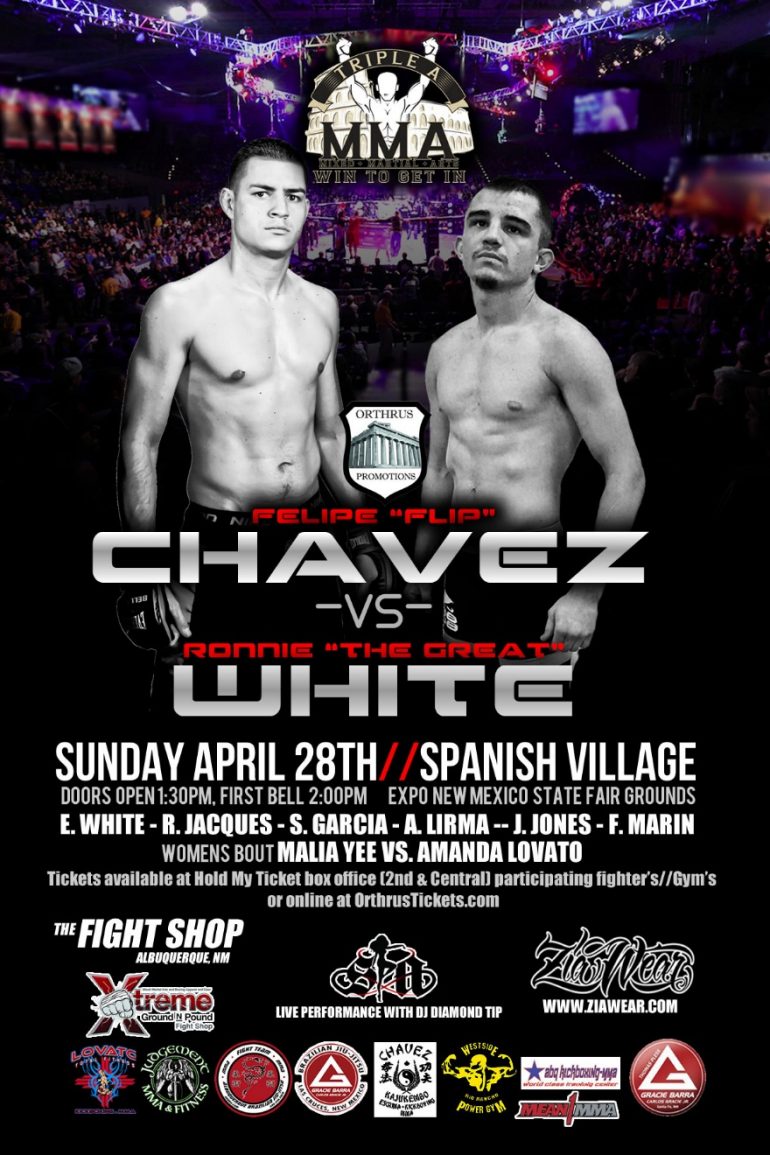 The full fight card for Triple A MMA’s debut event has been revealed. As previously reported Felipe Chavez of Mean 1 MMA will be taking on Ron White of Lovato’s Total Fitness in the main event. The event is being dubbed a “Win To Get In” bout. The rest of the card will be composed of 10 different fights with fighters representing eight different gyms across the state of New Mexico.

During the day on Sunday, April 28th local mixed martial arts will be live inside the New Mexico State Fairgrounds in the Spanish Village. Orthrus Promotions will be hosting the Triple-A-MMA event and will feature fighters based entirely from New Mexico. From as far south as Las Cruces and from as north as Santa Fe, the state’s regional scene is heavily represented.

Amongst the several gyms being represented, Lovato’s Total Fitness will send five of their athletes to compete in the event. Rio Rancho’s Judgement MMA will have four fighters participating as will Mean 1 MMA. Amongst the other gyms participating, Gracie Barra Las Cruces, ABQ BJJ and Santa Fe BJJ will have multiple representatives.

The evening will be headlined by Mean 1 MMA’s Felipe “Flip” Chavez (5-3) facing off with Lovato’s Total Fitness fighter Ronnie “The Great” White (4-5). The fight will be notable in that it will be the conclusion to the long road back from injury for Chavez who has been on hiatus from active completion for over three years.

Teammate to Chavez, Mean 1 MMA’s Steve Garcia (9-5) will also be featured on the main card of the event as he will be matched with Alan Lerma (0-1). Rounding out the main card, two ABQ BJJ fighters Eric White and Jed Jones will be in action as White takes on Gracie Barra Las Cruces’ Richard Jacques and Jones draws Francisco Marin from Chavez Dojo.

Amongst the notables on the undercard, King of the Cage veteran Steven Gonzales will be in action bringing his Santa Fe BJJ pedigree into the cage against Steven Cervantes out of Lovato’s Total Fitness. Gonzales will not come alone from the prominent Santa Fe gym as teammate Joel Whitney will take on Mean 1 MMA’s Justin Archuleta.

There will be Woman’s MMA scheduled for undercard action as Judgement MMA will send Amanda Lovato into the cage with Albuquerque Kickboxing Academy’s Malia Yee in a 107-pound match up. Teammates John Rozema, Rich Torres and Jesse Sandoval will all be in undercard amateur MMA action as well.

Stay tuned to SWFight.com for all your event coverage, fight breakdowns and analysis as we continue to get closer to the events date.

Tickets for the event are on sale now and range from $25-$75. Tickets can be purchased at OrthrusTickets.com, HoldMyTicket.com or by visiting The Hold My Ticket Box Office in Albuquerque NM.

The event will be a day show with the first fight starting at 2 p.m. MST and the doors opening at 1:30 p.m. MST.

Foster, Romero, Tapia, Holm and Trout to be Inducted Into New Mexico Boxing Hall of Fame