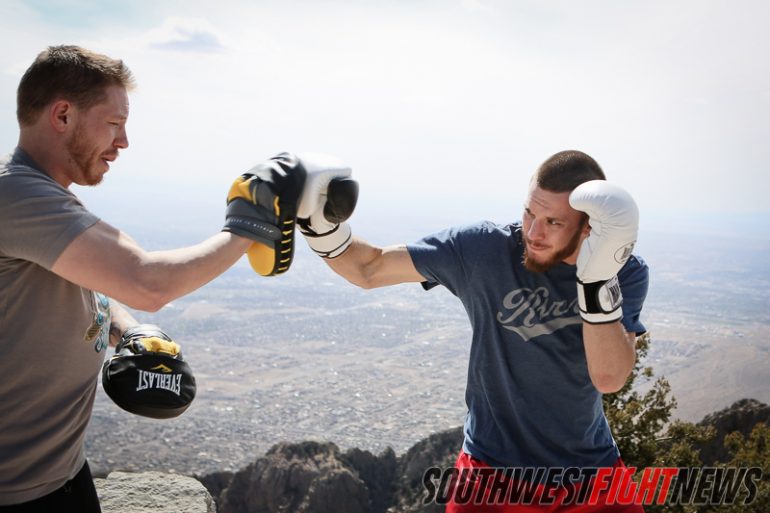 It is time for one of New Mexico’s top prospects to wrap his hands up, put the gloves on and put his unblemished record on the line.

Jackson’s-Winklejohn’s Hunter Tucker (5-0) steps back into the cage at Legacy 19 at the Allen Event Center in Allen, Texas tonight. Standing in the way of the 27-year old Tucker’s next big win is another fighter with a perfect record, Kevin Aguilar (7-0).

The 27-year old Tucker is enjoying quite a run since making his pro debut in June of 2011. His unblemished five fight professional record compliments his impressive four fight perfect amateur career. Friday nights fight will mark the second for Tucker this year, keeping consistent with his tempo of fighting twice per year since 2010. It will also mark Tucker’s first fight under the very prominent Texas based promotion Legacy FC.

Fighting out of his backyard, the hometown fighter Kevin “The Angel of Death” Aguilar will be making a quick turnaround from his last cage appearance. Aguilar won a unanimous decision over Nick “Ghost” Gonzales in early February for the Legacy promotion. Aguilar has big promotion experience, fighting under the Bellator and XFL banners and fighting notable regional fighters like Rey Trujillo.

The fight will be huge for both fighters as fighting and defeating a fellow undefeated this early in their careers will speak volumes and propel them higher on the proverbial ladder towards the next big step out of the regional scenes.

In terms of how the two match up, Tucker may give up a few pro fights in experience but is definitely better equipped as he trains with the renowned Jackson-Winklejohn camp where he has dozens of world class training partners to compliment having a handful of the best coaches in the entire sport.

Tucker is a lengthy fighter who really utilizes every bit of his reach advantage showcasing exceptional head movement and solid technical striking. The striking set of Tucker is very crisp and precise, which helps in fights against over aggressive and wild strikers. Aguilar mildly fills that billing as he likes to lunge in with knees and is no stranger to throwing flashy strikes like the superman punch. While it may often be wild, Aguilar has won five of seven fights by stoppage due to strikes.

Aguilar is also very dangerous despite that, he is very effective attacking the body and has solid footwork which only will be beneficial to getting inside on the rangy Tucker. The two fighters are very different in the stand up arsenals and the style clash should make it very interesting when the bell sounds and the two tap gloves.

On the ground, Aguilar has shown his ability to finish a fight from his back. He has one win coming by way of submission and it was back in March of 2012 at a Texas regional show. Tucker by contrast has won several fights, including a run of four straight dating back to 2011 and most recently including a guillotine choke victory in his Bellator debut this past January.

Tucker has the more well-rounded skill set, displaying very crafty grappling and exceptionally technical striking. While Aguilar seems to be a quality prospect in Texas, Tucker should be considered the favorite in the match up.

Stay tuned for fight results and analysis. The fight will be shown on AXS TV and starts at 8 PM Mountain Time.