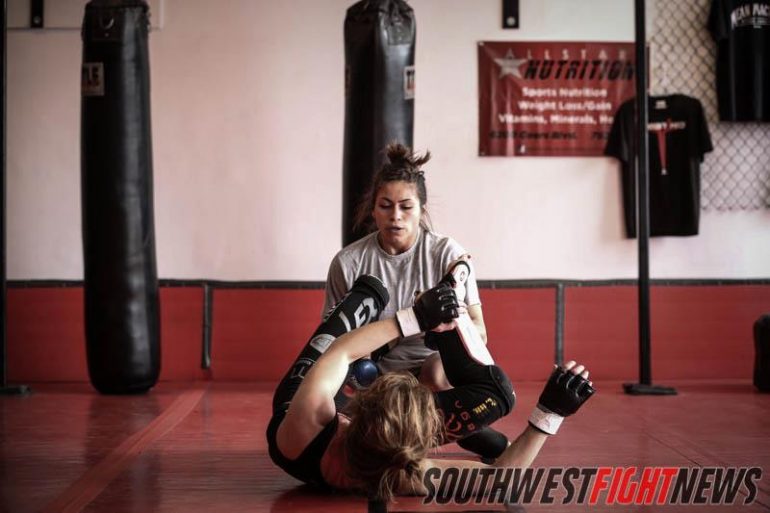 Gina Carano and “Cyborg” Santos were featured first as the initial Woman’s mixed martial artists in a prominent woman’s clash on network television, Ronda Rousey then beat Meisha Tate in what was the biggest fight for WMMA at the time and finally Rousey would be featured once again this time in the first woman’s fight in UFC history where she would beat Liz Carmouche for the UFC title.

In between those historical events, WMMA has had several iconic moments. Albuquerque’s Julie Kedzie and Meisha Tate fought in one of the most exciting fights of all time, Invicta FC was started with the premise to house only woman fighters within the promotion and a WMMA legend was defeated under the Bellator banner when Megumi Fujii saw a 22-fight unblemished streak ended in a razor thin split decision.

The latest in ground breaking scenarios in the Woman’s MMA world is that the upcoming season of the reality television show “The Ultimate Fighter” will not only be the first season to feature women contestants competing at 135-pounds but the show will be coached and headlined by two female fighters. Champion Ronda Rousey will coach alongside number one contender Cat Zingano and then will face off after the conclusion of the show for the UFC Woman’s Bantamweight title.

The season will feature contestants both male and female fighting at the 135-pound bantamweight division. Albuquerque will send three of their most talented women to tryout for the opportunity to compete this season. The trio all has a little something special to offer the UFC.

Coming from the same camp as teammate Frank Baca and boyfriend and UFC fighter Tim Means, FIT NHB’s Brenda Gonzales (4-0) is finding every bit the successful as her male counterparts. Coached by talented striking coach Arlene Vaughn, she has won a major title under the King of the Cage promotion. The KOTC 125-pound champ has been on a tear finishing 75% of her professional bouts by technical knock out. Her lone decision victory came in her five round title fight where she would unanimously win her first major MMA title.

While she may be trying out for the show, Gonzales is already scheduled for her most significant career bout as she is paired with undefeated Rin Nakai (13-0) and the bout is set to take place on May 19th for the Pancrase promotion in Tokyo, Japan.

Joining Brenda “Boom Boom” at the TUF tryouts will be a duo of women from a gym down the road from FIT NHB. The world renowned Jackson-Winklejohn gym is home to both Norma Rueda Center (1-0 pro, 5-0 amateur) and Tara LaRosa (21-3). The experience difference is very evident but in terms of talent, both girls offer plenty to the field potentially being considered for the cast of TUF 18.

LaRosa is one of the absolute best talents in all of WMMA as she has defeated notables Julie Kedzie, Shayla Brazler and Alexis Davis all of which are either in the UFC or will be aspiring to be on the TUF show. While she lost her last bout in the Invicta FC promotion, LaRosa is a 70% career finisher, submitting twelve of her opponents.

She should be considered an instant favorite if she is to get on the show but that speaks more about the fact she should’ve been considered to already be competing amongst the other women in the UFC.

Giving up 23-fights in experience to teammate LaRosa, Norma Rueda Center is one of those fighters you can’t help but be intrigued by. She had an amazing amateur career that totaled five victories to zero defeats and in that run, Center spent an impressive amount time gaining cage experience. She won three unanimous decisions during her two year amateur career.

Center would make her professional debut just last month, competing for the MEZ Sports promotion in California. She would win by unanimous decision, bringing over her perfection from the amateur ranks into her freshly started professional career. With that win, there came an extra amount of hype surrounding Center as she is part of a very strong team of women down at the Jackson-Winklejohn camp that also hosts Holly Holm and Invicta FC World Champion Michelle Waterson.

We wish the best for all the women trying out for TUF 18 and we encourage you to stay tuned to SWFight.com for more updates as news is released about who may be selected to the upcoming season of The Ultimate Fighter.