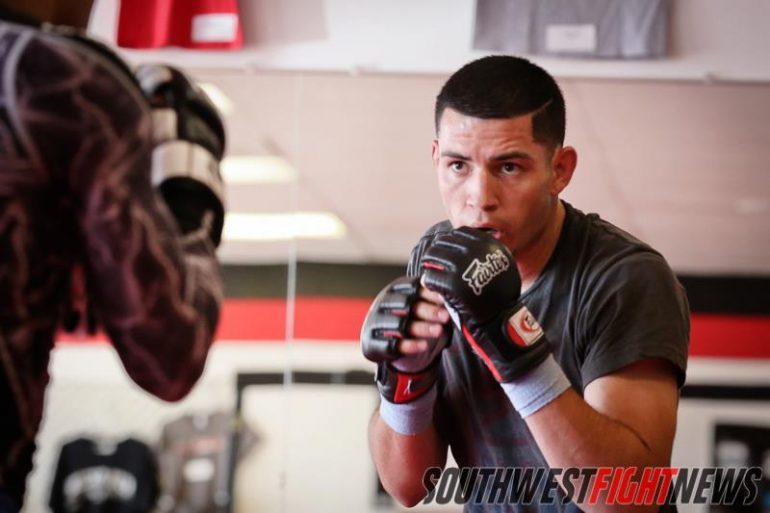 A new promotion, some new opportunities and a remarkable comeback.

Those are just a few of the themes that will be part of the storyline for Sunday afternoon’s MMA event hosted by Orthrus Promotions labeled Triple-A-MMA: “Win to get in”. The event will take place at 2 PM on April 28th inside the Spanish Village within the New Mexico State Fairgrounds. The event features only local New Mexico fighters in the scheduled 12-fight local card.

With eleven bouts being announced last week, the promotion has only seen one change to the original card as one fighter was pulled from the event and another added in his place. Mean 1 MMA will have another fighter participating in the cage Sunday afternoon as the undefeated amateur Falon Ring will return to MMA action in place of Steven Gonzales to fight Steven Cervantes in a 135-pound bout.

Headlining the evening’s festivities will be Ring’s teammate, Mean 1 MMA’s Felipe “Flip” Chavez (5-3) taking on Lovato’s Total Fitness fighter Ron “The Great” White (4-5). The fight holds significance in that Chavez has not seen MMA competition since September of 2009, making this comeback more than three and a half years in the making. Chavez fought for the “Up N UP” promotion in Hawaii three and a half years ago losing by triangle choke to Mark Oshiro. In that bout, Chavez would sustain a serious injury to his neck which prompted the lengthy layoff.

That sort of layoff is rarely seen in MMA, as most fighters who miss out on all that time tend to fall behind the progressive curve that the fast paced sport possesses. Chavez was scheduled to compete for the Bellator 91 card in Rio Rancho but was forced to pull out after suffering a toe injury in training. Now, two months later Chavez will have his chance to end his layoff and shake off the possible ring rust in hopes that he can get back to his winning ways.

Many recognize “Flip” as being the cousin of the very popular UFC veteran Diego Sanchez and his fighting style shows that the aggression runs in the family. He fights high paced and has very solid grappling. His aggressive pace is best exemplified by the fact that in eight career fights, one has yet to go to the judge’s decision. Submitting opponents in four of five career victories, Chavez is not only dynamic but powerful off of his back and extremely technical when setting up submissions.

Training out of Rio Rancho’s Mean 1 MMA gym, Chavez has all the support needed to build a successful martial arts career. The popular gym run by Coach Chris Luttrell has several quality fighters with different types of fighting styles. The gym is respected for the diversity and rich talent pool that is housed there.

Standing across the cage from Chavez, is a Lovato Total Fitness fighter with plenty of experience and talent of his own. Ron White has been training in kickboxing and MMA since he was 16-years old; six years later White is 22-years old and has found a home under the roof of Head Coach Lenny Lovato Sr. With pit stops at Albuquerque BJJ and Perez Fighting Systems, White has spent the last half of a year with the Lovato’s team

The striking advantage isn’t decisive in this one as both Chavez and White are both talented strikers. While Chavez may hold the power advantage being the larger fighter, the more active competitor White may be more polished. The time off can really affect timing and lack of cage time could really disrupt Chavez and his striking abilities.

White also has a very solid wrestling game to compliment his striking and that is where this fight will be most interesting. If White decides to push the pace, looking for a takedown he will most likely get it. However, Chavez is very inept off of his back and poses danger for anyone who shoots in for a takedown. If White ends up on top of Chavez, it will be very interesting to see who in fact holds the grappling advantage.

There is going to be answers for loads of questions after the main event concludes, of which includes how Chavez bounces back from his layoff. We will know whether White can deal with the pressure and size difference of Chavez. It will be showcased as to which fighter possesses the better grappling acumen, White’s wrestling versus Chavez and his technical Jiu Jitsu. It will be a fun main event between two guys looking for some career validation.

Triple-A-MMA: “Win to get in” will kick off at 2:00 P.M. on Sunday afternoon; stay tuned to SWFight.com for more event coverage, results and post-fight analysis. We wish the best to all of the competitors and encourage fight fans to show your support by heading out to the Spanish Village inside the New Mexico State Fairgrounds.