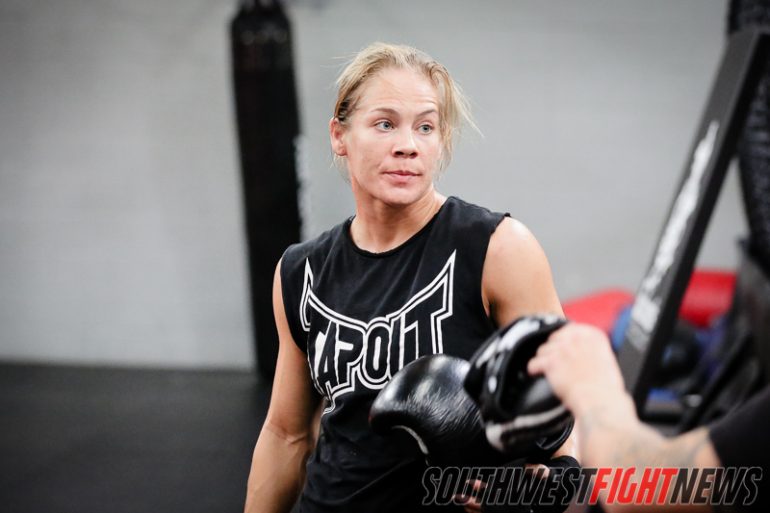 Deemed a “trailblazer” in WMMA, Julie “Fireball” Kedzie (16-11) will make her UFC debut in late-July on the UFC on FOX 8 event scheduled to be held inside the Key Arena in Seattle, Washington. It will be another impressive notch on what is already an illustrious career for the prominent woman MMA fighter.

Marking one of the first initial bouts in the UFC featuring women fighters, Kedzie will have come a long ways since making her professional debut more then nine years ago. In complete contrast, she will be facing an opponent with a five-year, five-fight MMA career. Germaine de Randamie (3-2) is a Strikeforce veteran training out of the American Kickboxing Academy by way of Utrecht, Netherlands.

The two bantamweights will most likely be featured on the FX portion of the televised card and the UFC is assuredly banking on fireworks from both of the exciting WMMA fighters. Neither woman has been knocked out, both have been submitted in fights and they both share the same “pedal to the metal” mentalities so it can be expected the two women will put on a show in Seattle.

Kedzie is looking to right her ship, dropping her last two bouts while taking place during her run in Strikeforce. While she has tasted defeat in two consecutive bouts, Kedzie very well may have had her finest MMA performance in her losing effort to Meisha Tate. On the undercard of the Strikeforce event featuring Ronda Rousey vs. Sarah Kaufman, Kedzie would turn in an A+ performance, dominating the fight from the opening bell. Fortune would not stay with Kedzie as Tate would come on strong in the final round, securing a fight ending arm-bar.

De Randamie is a heavily decorated kickboxing champion and she attacks with very crisp striking. She will be more technical then Kedzie has fought in the past and on the other end, Kedzie will be much more experienced then any opponent de Randamie has faced. It will be an interesting battle when the two bantamweight fighters go at it this July.

King of the Cage invades the Sunshine Theater on May 11th