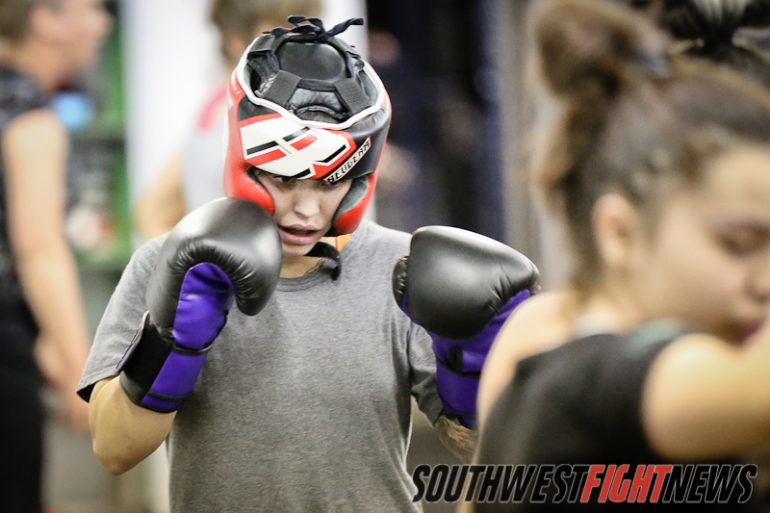 Every MMA event has a headliner and that headliner is the feature attraction the fight card. However, in so many occasions there are other notable competitors on the undercard who aren’t rewarded with the shine the main event headliners receive. On Sunday afternoon, Triple-A-MMA’s “Win to get in” event will feature a solid main event featuring locals Felipe Chavez and Ron White. Before the main event starts, there will be a slew of feature-able match ups creating potentially an exciting undercard.

One of those bouts happens to be the only one of its type to be featured on Sunday’s event as the 107-pound catchweight bout is the lone woman’s MMA match up. Judgement MMA’s Amanda Lovato (amateur debut) will make her MMA debut against Albuquerque Kickboxing’s Malia Yee (2-0) in what is one of the nights most anticipated bouts.

Training under the tutelage of Judgement MMA’s Head Coach Scott Marlowe, Amanda Lovato will make her MMA debut with plenty of combat sports experience. Spending ample time in the kickboxing and boxing smoker scene, Lovato is no stranger to exchanging strikes. She has even taken fights 10-15 pounds heavier then Sunday’s contracted weight of 107-pounds.

Lovato is a real spark plug in striking exchanges as her pressure is smothering and her straight punches are hard to get past. She also trains alongside her male counterparts in the gym which really help her improve as she spends a lot of time with stronger, larger and more skilled teammates.

Coach Scott Marlowe touched on that key point of Lovato’s training, “She gets hit and grapples with pros like Adrian Cruz and Josh Montoya. Their strengths and experience make her prepared for anything thrown at her.”

Malia Yee will bring with her a heap of Tae Kwon Do experience starting in her teen years and she will also hold the MMA experience advantage as well. Yee is undefeated as an amateur and is well battle tested in the ranks of competitive Tae Kwon Do and that’s the only real decisive advantage in this fight. Being more versed from within the confines of a cage may be the difference between having nerves or succumbing to hesitation.

At this level of MMA, it is hard to decipher as to who is the more polished fighter as amateurs are really focused upon sharpening tools and refining their craft. Coach Marlowe feels as if pressure will be the key in this match up, “I think Malia will do well in the beginning, but Amanda’s strength and pressure will overcome. I would be surprised if Malia try’s to stand with her.”

While the confidence is heavy from the Lovato camp, Coach Marlowe brings up a compelling point. Both of these women have striking backgrounds and this fight ironically may come down to whose more comfortable fighting on the ground. Yee has Jiu Jitsu experience in local tournaments and Lovato trains alongside the Olympic credentials of grappling coach Rich Chavez.

Coach Yee spoke about what he feels Malia will bring into the cage as her advantage, “Fight fans can expect a well composed and versed fighter in Yee, she is very strong on the ground as well as stand up. Recently Yee was promoted to a 2 stripe blue belt in BJJ and won a gold medal at one of the local grappling tournaments.”

The intangibles are also key here as Yee owns the advantage in experience. The unanswered intangibles are whether Lovato can transition her success from smokers into amateur MMA. Having two fights previously fall through, Lovato is assuredly hungry to finally get her debut under her belt. It is anyone’s guess on the outcome but watching Yee deal with Lovato’s pressure and recognizing whether Lovato struggles with the possible ground based game plan of Yee will be extremely intriguing.

In closing, Coach Yee discussed a little about Lovato’s camp and if I effects the fight preparation, “Knowing that Lovato comes out of Judgement MMA and trained by Scott Marlowe doesn’t really change too much in the fight camp leading up to April 28th. Of course I know Marlowe and respect him as a great trainer and strategist, but I always train my fighters to be as strong as possible in all areas.I am mostly known for my Muay Thai training of many high profile pro mma fighters over the years, but our gym specialize in not only Muay Thai, but Combat Submission Wrestling, BJJ and MMA. So wherever the fight takes place I feel confident that we’ll be prepared.

SWFight.com sends our best wishes to both fighters and encourage fight fans to make their way to the New Mexico State Fairgrounds within the Spanish Village for Sunday afternoons Triple-A-MMA event. Doors open at 1:30 P.M. and the first fight kicks off at 2:00 P.M. As always, stay tuned to SWFight.com for more event coverage and post event analysis. Make sure to check out the Awakening website (http://www.awakeningfighters.com/) to check out a destination that focuses solely on the ladies of combat sports. Included on the site, Amanda Lovato’s very own profile (http://www.awakeningfighters.com/athletes/amanda-lovato/). The database of women athletes is quite extensive, very informative and quite useful.

Triple-A-MMA: “Win to get in” delivers 11 action filled bouts on a Sunday afternoon