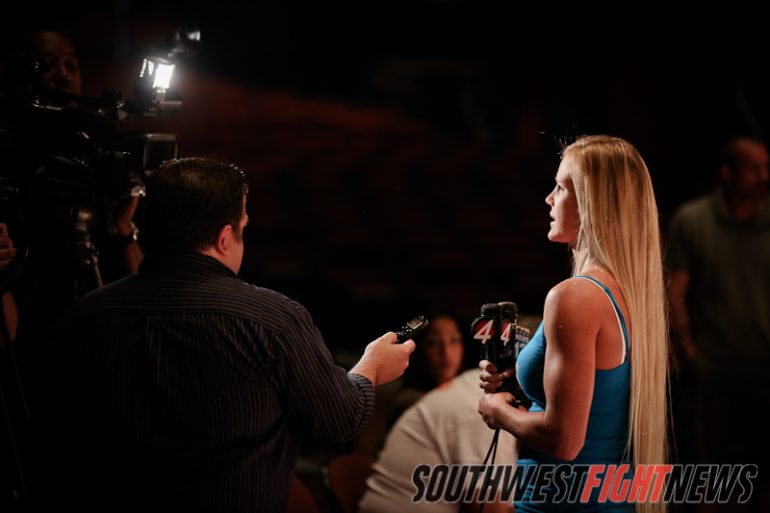 When one door closes, another one will open.

While the cliché has been used in dozens of scenarios, it works well with today’s news that World Champion boxer Holly Holm would be retiring from boxing. Holm (37-2-3) has long been considered not only one of the pound for pound best boxers in the world but one of the greatest women boxers of all time. The move comes three weeks before what will now be her last boxing bout and more then two months after her most recent visit to the world of mixed martial arts.

It was confirmed in the retirement press conference that Holm would end her boxing career and would focus full time on training for MMA. In between her successful boxing career, Holm has fought three times inside a cage and has scored three technical knockouts. With the emergence in popularity of Woman’s MMA, it comes as little surprise that the highly successful kickboxer and boxer would try her hand in grabbing some of those bright lights teammate Michelle Waterson has obtained in her championship career.

With the women’s aspect of sport in a different place then it was just a year ago, Holm will have plenty of options as to how to handle her career in MMA going forward. SWFight.com looks at a possible career path going forward.

Staying with the status quo

It has been a slow developing career for Holm thus far due to her full time commitment to defend titles in the boxing world. She has only fought a total of three times since making her debut in March of 2011. She has been slowly transitioning to this point and her team may not want to rush things.

She made her last appearance at Bellator’s first ever show in New Mexico and she definitely brought the crowd and the buzz into the Santa Ana Star Center. Holm could be featured again for the promotion if they in fact return this summer which would hit on two things that have been typical of Holm’s combat sports career.

First, it would accommodate Holm’s fan base which is very healthy in New Mexico which could in turn really benefit her popularity. New Mexico is already a hot spot for MMA and another Holm fight within the state could draw major media attention. Secondly, it would allow for Holm to be brought up slowly as she would most likely stay competing with a regional fighter so her transition into the cage can remain slow paced.

Under this option, fight fans may be treated to a late summer MMA fight for Holm under a promotion here in New Mexico. If not Bellator MMA, the Jackson’s MMA Series is another viable option as she is one of the mainstays of the Jackson-Winklejohn gym.

Taking a step up

There is now a fluid outlet for WMMA to flourish out of as Invicta FC has become a prominent brand in MMA promotion. The all-woman promotion has ties to the UFC as both companies are in agreement to float fighters between the brands. Invicta FC has now become a viable option for women to build their resumes and get the nod to fight on the sports brightest stage.

Holm would join teammates Jodie Esquibel and Sarah Kaufman in the promotion as well as newly crowned Invicta FC Atomweight Champion Michelle Waterson. Holm would face stiffer competition and this route would mean her MMA career would take a much quicker path and could provide loads of adversity for boxing battle tested Holm.

Possible match ups would include Shayna Bazler, Kaitlyn Young, Leslie Smith and Raquel Pennington. While the world class striker would mostly likely be favored in the striking aspects of those fights, it would be a large step up in competition for Holm.

Getting a fight with a big name WMMA fighter

Based on reputation alone, Holm will have access to fighting at basically any level of competition. If she follows the career model being described she could very well be looking at a six or seven fight perfect streak heading into her first significant, high profile MMA fight. That fight could very well come as the main event of an Invicta event as Holm has the star power to headline and as much if not more popularity then 90% of Invicta FC’s roster of women fighters.

If Holm plans to really stamp her name down as “the” premier fighter to watch out for then a fight with “Cyborg” Santos at 145-pounds would be the biggest opportunity for her outside of the UFC. While it would be contested ten pounds heavier then her past three MMA bouts, Holm would have the striking prowess to contest the aggressive Santos and the technical ability to keep the fight from being a brawl.

Beating Santos would not only put her on the map, it would immediately make her a viable contender in the UFC as the hopes of a super-fight between Santos and Champion Ronda Rousey would be nullified. Winning two to three fights before a clash with Santos just may be the beacon of success Holm would need to be the first women to stand atop both combat sports.

Holm’s boxing pedigree will already have earned her a reputation within the MMA world. Surprising to most however is that she has dominated her three MMA fights with her powerful kicks and pin point accuracy. Many forget that her head coach is an elite level, world renowned MMA and kickboxing coach. Mike Winklejohn is the man behind the striking arsenals of such prominent fighters as Light-Heavyweight Champion Jon Jones, former Interim Welterweight Champion Carlos Condit and top featherweight contender Cub Swanson.

Using that world class pedigree, there is a chance Holm could find herself making that jump to the UFC sooner rather then later, where her 135-pound division is stacked with talent. Headed by undefeated Champion Ronda Rousey, the UFC has focused solely thus far on building up that weight class. Top contenders Cat Zingano, Meisha Tate and Sara McMann solidify the toughness of that shark tank and Holm could take her elite striking acumen to test it against the very best as she had been doing in the boxing world for several years.

One of the reasons Holm should take her time accumulating some fights outside of the biggest organization is that she has yet to be tested in the wrestling and grappling department. Judo and wrestling head the top skills possessed by the UFC’s top girls and Holm may be striking comparable with anyone but her all-around MMA game may still need developing. An aforementioned fight with Santos would equip Holm with the cage experience to know how she would fare with the top talent of WMMA.

It would not surprise combat sports pundits to see Holm being a viable contender in the next year and a champion contender not too long after that. With WMMA still developing, we have seen women dominate being well versed in a single discipline. Rousey’s Judo, Tate’s wrestling and now Holm’s kickboxing are all examples of how being an expert in one area of MMA could really be dominant.

Regardless of the path our very own Holly Holm plans to take, SWFight.com will be here to provide updates, coverage and analysis. Stay tuned for more articles about her upcoming boxing fight, her induction into New Mexico’s boxing Hall of Fame and then of her MMA plans thereafter.

Austin Trout Looks to Reel in Another Belt Against Canelo Alvarez