Foster, Romero, Tapia, Holm and Trout to be Inducted Into New Mexico Boxing Hall of Fame 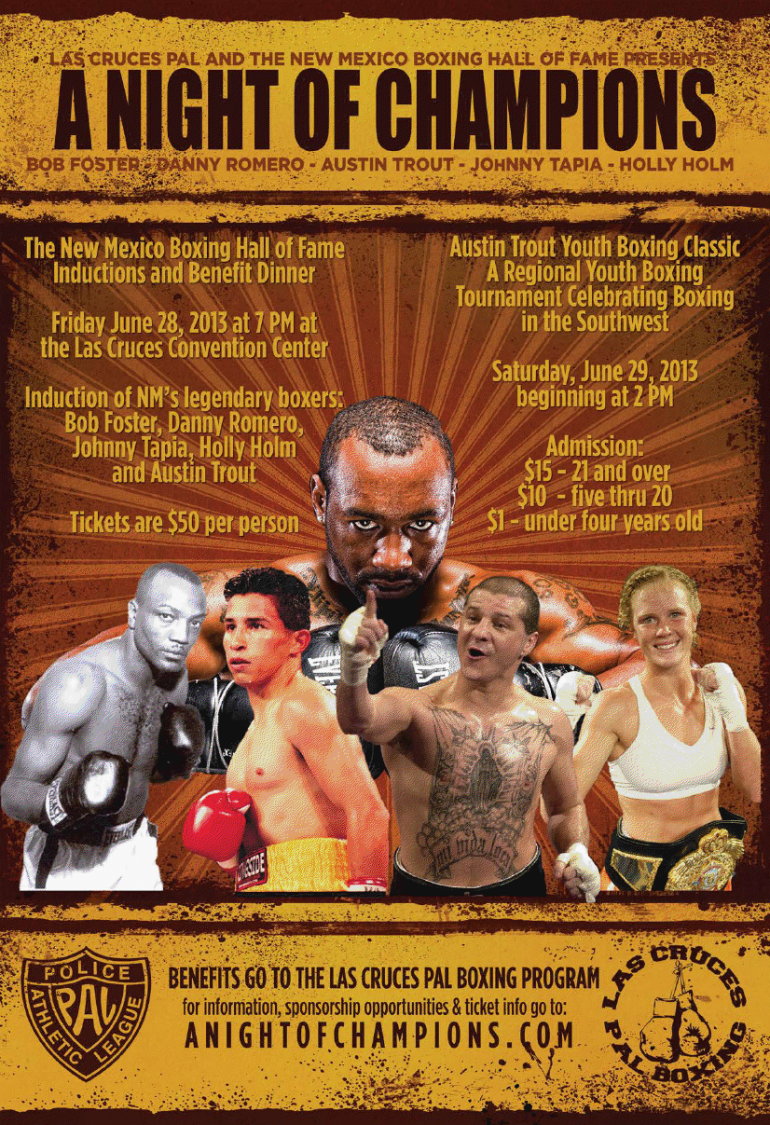 On June 28th the greatest New Mexican fighters of all time will be honored by being inducted into the New Mexico Boxing Hall of Fame. The ceremony, “A Night of Champions”, is being put together by the Las Cruces Police Athletic League and the New Mexico Hall of Fame and will take place at the Las Cruces Convention Center in Las Cruces, New Mexico. The new inductees will include former and current world champions: Bob Foster, Danny Romero, Johnny Tapia, Holly Holm and Austin Trout.

Johnny Tapia’s wife Teresa Tapia will be representing her late husband at the event. Every other fighter with the exception of Foster have committed to attending the induction ceremony.

The event will begin at 6 PM with a VIP Cocktail hour, when attendees will have the opportunity to meet the inductees. The New Mexico Hall of Fame ceremony will begin at 7 PM, with dinner being served to all attendees.

Credentials for each inductee:

Full details in the press release below…

For the first time ever, the greatest names in New Mexico boxing history will be under one roof as the New Mexico Boxing Hall of Fame inducts its five newest members.

The new inductees will include former and current world champions: Bob Foster, Danny Romero, Johnny Tapia, Holly Holm and Austin Trout. Currently, all but Foster have committed to being at the event, with Teresa Tapia representing her late husband, Johnny Tapia.

Ticket prices are as follows:

The Austin Trout Youth Boxing Classic, a regional amateur boxing event celebrating boxing in the Southwest, will be held on Saturday, June 29, 2013 beginning at 2 PM.

Admission for the boxing event is as follows:

Proceeds from both events will go to the Las Cruces PAL Boxing Club, a program that has, for over 40 years, taken “at-risk” youth off the streets and taught them discipline through boxing.