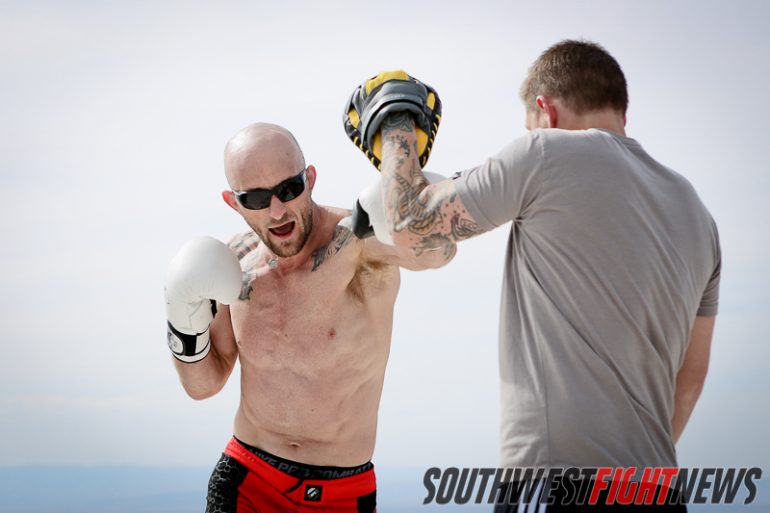 One of most battle tested veterans training out of Albuquerque, New Mexico will get his shot in the premier promotion in mixed martial arts. Fighting since 2005, he will finally get his chance beneath the bright lights of the big show in Las Vegas, Nevada eight years after his debut fight took place in a little place in Oklahoma. While he isn’t originally from New Mexico, the Texas born fighter calls the Jackson-Winklejohn gym his home and he will represent our area this Saturday night in The Ultimate Fighter Finale that will conclude the 17th installment of the UFC’s reality television show.

“Bubba” McDaniel (20-6) will look to redeem himself after being knocked off the Ultimate Fighter tournament in the quarterfinals. Standing in the way of that redemption is Colorado native, Gilbert Smith (5-1). The two fighters are both seeking to right the ship and get back on the winning path both were riding on upon entering the show.

McDaniel is the truest definition of veteran, fighting for such promotions as Bellator, ShoXC, EliteXC and the XFL. He has beaten an array of notable opponents that include Kala Hose, Kyacey Uscola and Eric Schambari. While he may have lost the fights, McDaniel’s has also stepped into the cage with Bellator Champion Alexander Shlemenko and former UFC fighter Gerald Harris. Bringing in an impressive amount of experience, Bubba will be well prepared and tested as the 8-year veteran has seen plenty during his career.

Making his pro debut in 2011, Gilbert Smith will be heading into this bout giving up a huge amount of experience which may make a difference at this high of a level in MMA. While McDaniel’s was traveling the country fighting in several organizations, Smith was grounded in a regional Colorado promotion for basically the entirety of his career.

The match up is an interesting one to say the least, especially if we look at the pairs most recent fights in the Ultimate Fighter tournament. Smith had lost once previously in a five round fight that he’d lose by way of unanimous decision and in his fight inside the Ultimate Fighter house, he lost to the much more experienced Luke Barnatt when Smith was stopped with a flying knee.

McDaniel’s has lost primarily by way of submission throughout his career but met the shows wrecking machine in Uriah Hall in the quarterfinals. McDaniel’s was knocked out viciously by Hall, in a manner that fractured three bones in McDaniel’s face. While the fight failed to show McDaniel’s talents, he has shown his grittiness throughout his career where he has won most of his fights ironically by submission, the rear-naked choke being a go-to move over his 26-fight career.

With having a base in wrestling and grappling, Smith would most likely prefer the fight to take place on the ground where his positional control is solid and where he won’t be in danger of the lengthy and rangy McDaniel’s. Bubba’s experience should imply he would not mind the fight to take place anywhere but the stand up is where he will have a more significant advantage.

McDaniel’s will find that his range will be advantageous in keeping the smaller and lower based Smith at bay. He is extremely versatile and tough nosed, willing to engage in the pocket and take punishment as he dishes out his own. The Jackson-Winklejohn trained fighter is a teammate and training partner of Light-Heavyweight Champ Jon Jones and his style shows flashes of the champion and head coach Mike Winklejohn. The striking advantage will be very visible.

The variables however may be the most significant factors in this match up. Smith is extremely raw to MMA still and has not experienced much outside of his regional home. He is making a huge step up coming into the UFC and is making the promotional debut on the main card on the televised portion of a prominent event. McDaniel’s variable lays in the fact he had two very heart wrenching losses while on the show and during the filming he came off as a very emotional fighter. He has a lot of pressure on his shoulders and it will be interesting to see how he handles in Saturday night.

As always stay tuned to SWFight.com for results, coverage and analysis and as always fight fans make sure to support your locals, watch The Ultimate Fighter 17 Finale this Saturday Night on FX. Bubba will be kicking off the main card action so make sure to tune in!

New Mexico has a strong showing at TUF 18 Tryouts