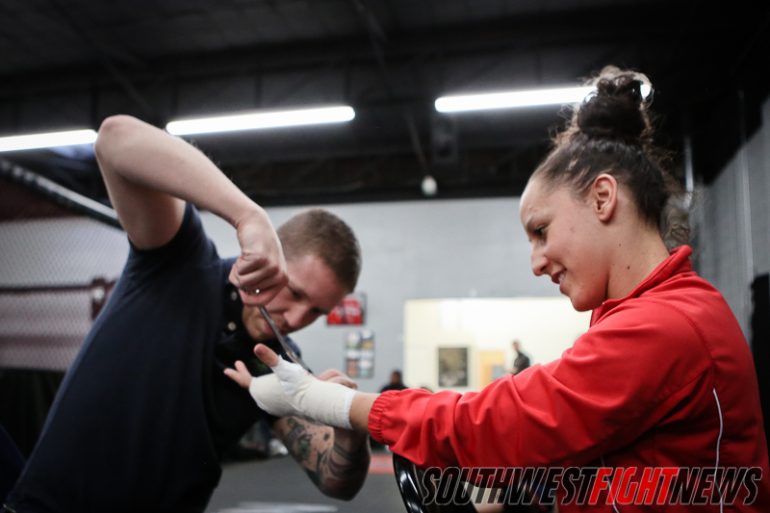 When a gym plays host to dozens of elite level fighters it often finds several of their fighters fighting around the same time. As the budding Woman’s division flourishes, so does the culture in Albuquerque where so many of those female athletes train. The Jackson-Winklejohn camp is home to several prominent and notable women combat athletes highlighted by renowned boxing world champion and MMA fighter Holly Holm. While she may be the most notable name of the bunch, she is complimented very well by several other top level fighters.

And several of them will make their appearances in competition this month under a promotion that is strictly ran for women fighters.

Starting April with momentum for Woman’s MMA buzz, the all female promotion Invicta will put on its fifth show. Invicta 5 will take place on April 5th; inside the Ameristar Casino Hotel, in Kansas City, Missouri. There will be three fighters on the card who will be representing the Jackson-Winklejohn camp, starting on the undercard with an emerging prospect in the atomweight 105-pound division.

Jodie Esquibel (3-0 pro, 1-0 amateur) will put her unblemished record on the line against Australian Alex Chambers (3-1). Esquibel most recently fought on the previous Invicta event where she would impressively best Liz McCarthy in a split decision victory that really helped Esquibel emerge as a fighter to keep an eye on.

Sarah Kaufman (15-2), currently training out of Albuquerque by way of the Zugec Ultimate Martial Arts gym in Victoria, British Colombia, Canada is scheduled to make her much anticipated return to action. Her last fight was under the Strikeforce banner, fighting for the promotions title against current UFC Champion Ronda Rousey. While she lost via submission in the first round, Kaufman is still regarded as one of the top women fighters in the world.

Standing in the way of redemption will be Cesar Gracie’s Leslie Smith (5-2) who is coming off a very impressive dismantling of Raquel Pennington at Invicta 4. Kaufman is currently signed to the UFC but a loss here could really hurt her stock. Smith is looking for an opportunity while Kaufman is looking to right her ship on the way to her UFC debut.

The most significant fight on the card however is the main event which will have the Invicta Atomweight Title on the line. Albuquerque’s Michelle Waterson (10-3) will challenge promotion champion Jessica Penne (10-1).

The “Karate Hottie” is finally getting her chance atop the sport and her division after a 6-year career competing as a martial artist. While marriage and motherhood have made the climb to this point a little longer then many expected due to Waterson’s elite talent level, she is now one fight away from the pinnacle of the 105-pound Woman’s division. Waterson is coming off her very impressive Invicta debut where she beat Lacey Schuckman. While her striking is crisp and solid, Waterson has finished six of ten victories by way of submission so expect a prepared challenger to give the champ all she has to offer.

Penne is on a tear right now currently riding a three fight win streak all by TKO or submission. Included in that run was her triangle choke finish of Naho Sugiyama at the third Invicta show to capture the 105-pound division title. Penne trains out of Huntington Beach, California and brings into the cage a powerful skill set that has allowed her to dominate in the grappling game. Identical to Waterson, Penne has finished six of ten victories by way of submission.

The fight is very significant in that it would be the most prolific woman’s MMA title ever to be brought into the accolade heavy Jackson-Winklejohn gym. Waterson has long been one of the constants amongst that gym and is one of the more recognizable and marketable fighters training out of New Mexico.

Stay tuned to SWFight.com for Invicta 5 updates and results featuring the three local athletes and as always fight fans make sure to show and send your support to the hard working fighters making the trip to Kansas City.