Austin Trout Looks to Reel in Another Belt Against Canelo Alvarez 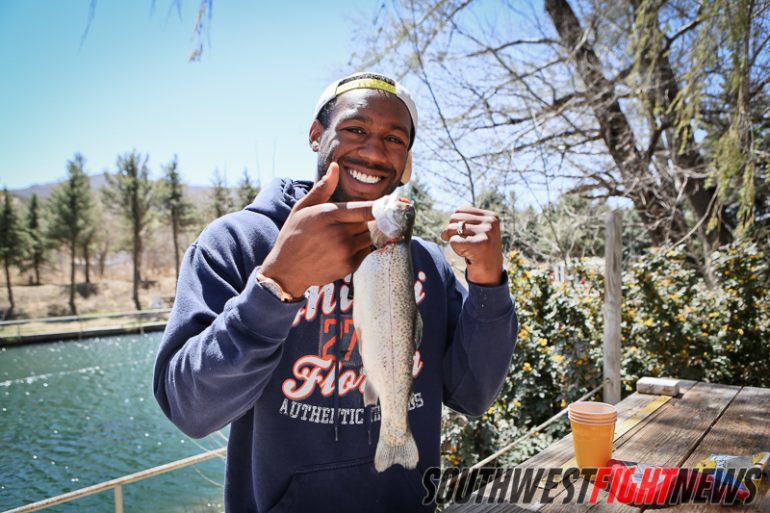 On his final weekend of training before his WBA and WBC world championship unification fight against Saul Canelo Alvarez in San Antonio, Texas, Austin Trout found time to both train and relax.

It is an extremely technical affair. Everyone in the Trout Camp watches the contest in silence but appreciation of the fine skill and show Rigondeaux puts on in a unanimous decision over Donaire.

“I’m going to do what Rigondeaux did to Donaire to Canelo,” says Trout, who himself is considered one of the best technical fighters in the light middleweight division.

Sunday morning he spent running in the Sierra Blanca mountains. A television crew from Televisa, based out of Mexico City,

was out the entire week covering Trout’s last week of camp before this upcoming Saturday’s bout against Saul ‘Canelo’ Alvarez.

“I covered ‘Canelo’s’ professional debut,” boosted one of the reporters in Spanish. “Trout is going to win. He basically put [Miguel] Cotto into retirement. He’s got the skills to outbox Canelo.” In the background the Mexican photographer the accompanied him nodded in agreement.

“There he goes again,” said an elderly woman who was out walking the mountains as Trout ran by her. “It’s so exciting to have him here.”

After a plan for a power nap failed, Trout and his team would take his son, niece and his trainer Louie Burke’s son out for an afternoon of fishing at

a manmade pond just north of the town of Ruidoso.

“Y’all are back again huh,” the owner of the pond said in her Texan accent.

“This is Austin Trout, the world champion,” said Burke to the woman.

A little under two hours later the group had captured 17 fish with bamboo poles. Trout’s niece, the most timid of the children when it came to the idea of fishing would out do the two boys by pulling out the biggest catch. Trout would proudly pose in a classic boxer stance holding his niece’s fish. “This fish was caught with a left hook,” he joked as he held it up.

Two hours later the final sparring session would be held. Meeting the team at the First Baptist Church would be California middleweight DonYil Livingston who himself has a contest May 4th on the Floyd Mayweather vs. Robert Guerrero undercard.

The church has served as a training facility for the team during the last two consecutive training camps. It contains a ring, two punching bags, a double end striking bag and a speed bag. You would never think that a world champion would train there but the gym provides seclusion. It sits in over 6,200 of elevation in mountain terrain providing great training grounds.

To end the evening Trout would join us for his final video interview before departing to San Antonio.

Two hours later we would be pulled for doing 69 miles per hour in a 50 mile per hour zone.

The county sheriff would ask us where we were coming from.

We told him that we were doing some reporting on the world champ’s last weekend of training. The kind officer would let us off with a warning soon after.