Alvarez Out Punched, Out Landed But Gets Decision Over Trout 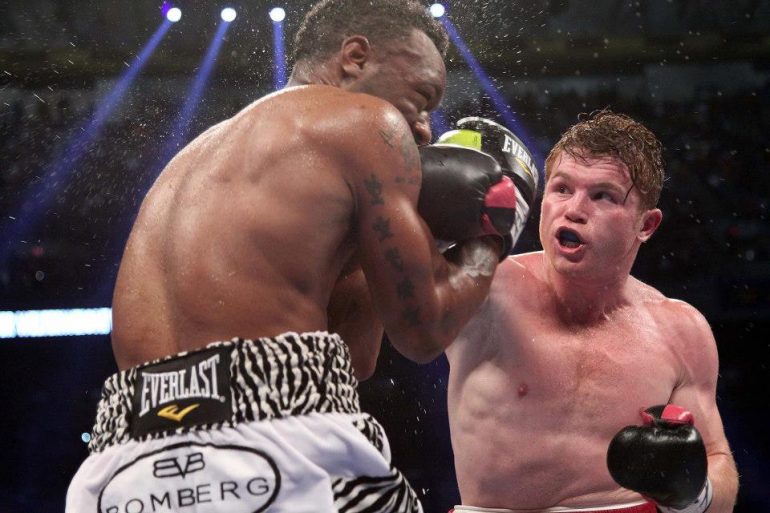 In front of the crowd of over 39,427 Saturday night at the Alamodome in San Antonio, Texas, Saul “Canelo” Alvarez became the fifth man to unify a pair of 154-pound boxing titles in defeating Las Cruces, New Mexico’s, Austin Trout by unanimous decision.

The two men were greeted by a tremendous roar from the mostly Mexican and Mexican American crowd. The initial round saw Trout attempt to develop a lead right jab to create distance between he and the shorter Alvarez.

In the second, Alvarez was able to close the distance against Trout catching him with a handful of power punches. A right uppercut set up by a slick pulling of Trout’s neck down with his left hand.

Trout would box beautifully in the third stanza punctuating his control of the round with a three punch combination ending with a hard right hook at the bell. In a close fourth round Trout would develop a rhythm working lengthy punches but Alvarez would throw and land several clean straight lead left jabs.

Alvarez would slow his pace in the fifth appearing to waiting to counter Trout for much of the round. This left him susceptible for a good four-punch combination for Trout.  Many of Trout’s punches would miss due to good head movement from Alvarez.

The WBC champion would use his power advantage and land several strong power punches. Trout would attempt to respond by keeping the action in the middle of the ring. Alvarez would appear to slow down toward the end of the round, this allowed Trout to force Alvarez‘ back to the ropes where he would land a few body shots. In a turn of events Trout would cut off the ring on Alvarez, a tactic many thought Alvarez would apply against him. A huge uppercut from the Mexican would finish the round.

It would be the aggression of Trout that would seem to give him the sixth. Neither man was able to land a clean blow until Trout landing a solid right hook as Alvarez was throwing his own lead left hook . Most of the punches each man threw missed. Alvarez spent most of the round fighting from the ropes.

The pro-Mexican crowd would go into the frenzy in the seventh when their fighter would throw a lazy left job to which Trout would unintentionally partially block but would follow up with another left jab and solid straight right to the chin.

The blow would send Trout staggering backwards with his equilibrium completely off balance forcing him down to his hands and knees. Trout would try to fight out of danger and would outbox Alvarez for the rest of the round however still losing the round due to the knockdown.

The Texas Boxing Commission allows open scoring after the fourth and eighth rounds. After knowing he was well ahead by the scores of 80-71, 78-73, and 76-75 on the three judges cars, it appeared that Alvarez would take his foot off the gas.

Rounds eight through ten would see Trout develop a rhythm setting most of his shots up  with his quick jab. Alvarez, knowing he was ahead, turned into a counter puncher. In the final two rounds he did however appear to land the more effective power punches.

The 12 round fight was everything but the landslide contest seen by the judges who presented the tallies of 118-109. 115-112 and 116-111. The widest score was presented by Stanley Christodoulou who was the only WBA representative. Trout has held the WBA title since defeating Alvarez’s brother Rigoberto in February of 2011.

With the victory Alvarez became the first fighter since 2004 to unify the same WBA and WBC that Winky Wright did by defeating Shane Mosely.

Below are the ComPuBox number for the bout. Trout threw 338 more punches than Alvarez, and landed 30 more. Alvarez held a slight edge in power punching.

Side Note: Bobby Hunter with Fight Score Collector (@thefightscore) compiled a list of both Press and Fan scores from yestreday’s fight. A total of 45 media members provided their scores to the bout. A total of 23 journalist scored the bout for Canelo, 19 for Trout and 3 had it draw
http://fightscorecollector.blogspot.com/

Canelo Alvarez vs. Austin Trout Round by Round Updates