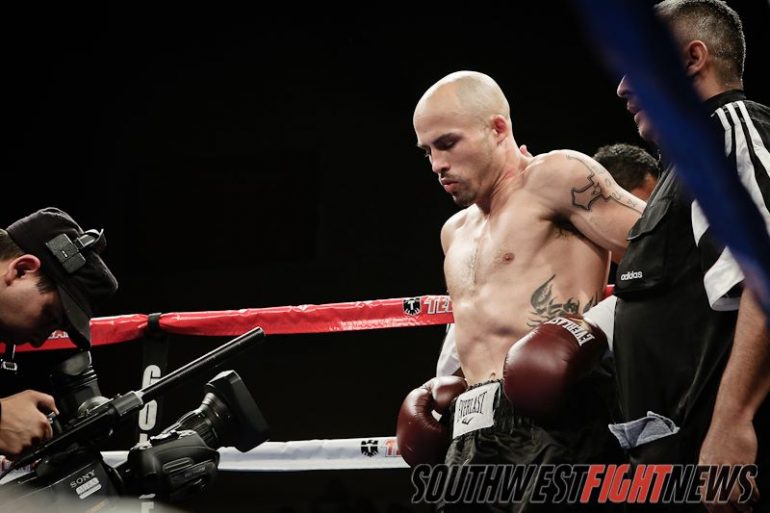 If you bring up the name Yordan Hernández in boxing circles throughout Albuquerque you will get responses anywhere from, “Great speed and accuracy”; “As good as raw skill can get”, to the so often heard: “What a waste of talent”, “He needs to stay in the gym more.”

The truth is that Hernández is quite possibly one of the best technical fighters in the state of New Mexico but with only five amateur and not many professional fights, the 29-year-old is not active enough or experienced enough to be dubbed as one of the state’s best boxers. That is something he is looking to change.

“It’s just hard for me to stay in the gym,” explains Hernández. “I work and find it hard to set time to train.”

Nearly two years after his professional boxing debut, Hernández has only participated in two professional fights. Most of it you can blame on his reluctancy to stay in the gym but over the past year that can be attributed to several life changing experiences.

Most recently, right before a scheduled bout on the Johnny Tapia Presents card, Hernández’ father would suffer a heart-attack.

“I can’t blame me not being on that Tapia card on my father’s situation,” says Hernández. “I also had the flu pretty bad and I wasn’t able to participate.” His father now lives with him and his girlfriend, where months later, they are still assisting the elder Hernández in recovering.

Another mental setback came right before last Mother’s Day when the convenience store Hernández was working was robbed.

“He was already walking toward me pointing the gun,” says Hernandez of the robber. “I didn’t know what to do. I thought to myself ‘Is that a real gun?’, ‘If I hit him will he really shoot me?’ I had all these things going through my mind.”

As the only worker in the store that day Hernández was forced to oblige to the robber’s demands. The looter would go on to empty the cash register and flee but as he was doing so would drop the money bag. Just then one of Hernández’ friends would be entering the store.

“He reached down for the bag,” recalls Hernández of the friend. “I tried signaling at him with my arms, ‘No, no! Don’t pick it up.’”

The friend, who was disabled, would reach down to pick up the bag; the robber would let off a warning shoot in the air but would then point the gun at Hernández‘ friend and shoot him in his disabled leg. The companion would survive his injuries but the scare was big enough to affect Hernández for a few weeks.

This was not the first time that Hernández was threatened with his life by a gun. Four years earlier while walking home after his shift at Pro’s Ranch Market at four in the morning, a pair of teenagers attempted to rob him with a shotgun.

“I had a couple of hundred dollars in my pocket but I told them that I only had $20.” recalls Hernández. The most surprising thing was that Hernández recognized one of the robbers; it was a young teenager that had trained at his gym for several years. The adolescent did not recognize Hernández the day of the early morning hold-up but Hernández would confront him days later.

Surprisingly, he would not report the event to police or even retaliate. “I try to tell these kids that that is not the path they should be going down,” says Hernández.

Perhaps that attitude stems from his Cuban and Catholic roots. Hernández‘ family hails from Havana, Cuba. His father was a political prisoner who after three years in prison was granted asylum by the United States. The family would take a flight from Havana to Miami then to Dallas and would eventually arrive in Albuquerque. A family they knew very well in Cuba lived in the Duke City and it influenced their decision to reside here themselves.

“If it were up to me, we would have stayed in Miami,” jokes Hernández. “But God has a plan for all of us and this was his for us.”

The plan includes a big local fight this Friday on Chavez Promotions’ Warehouse Rumble 3 card against fellow Albuquerquean Matthew Baca. Both fighters will enter the ring with a two win and zero losses record and will with a doubt be each others best opponents so far in their career.

Thanks to sponsors the event will also mark the first time Hernández enters the ring with a uniform. A subtle change to his normal ring entrance that most fans may not even notice but means the world to Hernández. The front of the shorts will display the word “Nene” meaning “baby” a nickname his oldest brother gave him when they were young.

“I don’t use nicknames because I have a long name already,” says Hernández whose full name is Yordan Hernández-Perez; the hyphenation comes from a combination of his father’s and mother’s surnames a popular naming style latin america. “I don’t even consider myself a boxer. To me that’s a title that comes from earning it after years as a professional.”

The contest against Baca will serve as the co-main event on the Warehouse Rumble 3 card taking place Friday at the Wool Warehouse near downtown Albuquerque, New Mexico.