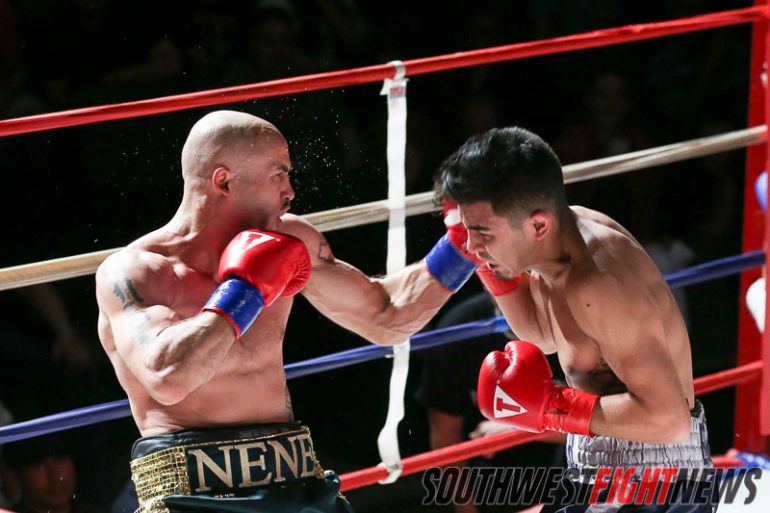 Torres Experience Shows as he Tolerates Tough Test from Sanchez

For the third consecutive time Chavez Promotions has delivered on another stellar event at the Wool Warehouse. On Friday night, a four-fight card lived up to the expectation and the hype as Warehouse Rumble 3 entertained the crowd from beginning to end.

In the main event of the evening, Josh Torres would ultimately impose his will against Jose Luis Sanchez to come away with a seventh round technical knockout victory. Coming out extremely patient in the first, Torres would sidestep and time Sanchez‘s long punches.

The next two rounds would see Sanchez develop a rhythm by landing punches from a distance. This would allow him to set up several combinations which Torres would defend well but would sporadically respond to, instead he would slap his gloves together and yell “Come on!” in attempt to get into the lesser experienced fighters head.

“I was trying to play head games with him,” said Torres. “He’s a young fighter that doesn’t have the experience that we do and we knew it would pay off if we played a little bit of head games.”

Torres would even the score in fourth round with a body attack capitalized by a right hook to the body followed by a right uppercut that would force Sanchez to sit on the bottom rope. Sanchez would forcefully answer the referee’s 10-count.

After a break from a bad round, Sanchez would establish a jab that would help keep Torres at bay. Despite throwing clean punches, Sanchez was unable to hurt Torres who smoothly used his elbows to defend both his head and body.

The final stanza would see Torres establish his own, much stronger jab. A chorus of “Pitbull” chants would lead him to landing a four power-punch combination ending with an over the top right that would floor Sanchez. Once he returned to his feet Sanchez, who was wobbly, would not hold and instead would attempt to punch his way out of the daze.

With the right side of his face extremely swollen and nose bleeding, Sanchez would be caught by a strong right uppercut and left hook that set him up for a huge five punch flurry, forcing referee Richard Espinoza to stop the contest.

“We were past due for a TKO victory,” said Torres. He would also admit that he gave up some of the middle rounds.

“I was trying to play head games with him,” explained Torres. “I knew his endurance wouldn’t keep up with mine, I trained way too hard and we were just trying to test his will a little bit.”

Sanchez was in his first career fight scheduled beyond four rounds. This eight round contest too many seemed like a big step up for Sanchez but before the seventh round all of press row had him winning by a point.

After bad blood was exchanged in press conferences and at the event’s weigh-in, Yordan Hernandez and Matthew Baca finally

Baca would put the pressure on for most of the fight and would implement several combinations in which he changed levels but stood right in front of Hernandez for most of the contest.

“It wasn’t my night man,” said Baca. “I’m glad I took the challenge but I didn’t stick to the game plan and work angles.”

The third time was not the charm for Amanda Crespin who would be outworked and out pointed by Nohime Dennisson. Dennisson’s feints and rushing combinations appeared to neutralize any plan of attack Crespin planned for most of the rounds. After a very competitive first rounds that Crespin may have won pulled out with crisp punching, Dennisson would rally and bully Crespin when battling in the trenches.

After the decision, Dennisson would go to Crespin’s corner to congratulate her on a good fight but her pleasantries were completely dismissed.

In the opening bout of the evening Jason Sanchez‘ speed would be too much for Suanitu Hogue. Displaying incredible footwork

Sanchez would dance around Hogue landing several flush combinations before Hogue would react. Hogue did have success when bulling toward Sanchez forcing him against the ropes but those opportunities would be short lived as Sanchez would either box his way out of trouble or simply slide out.

Johnny Tapia Presents The Next Chapter 3 Weigh In Results