Quinn Mulhern gets the call to the UFC, faces off with Rick Story at UFC 158 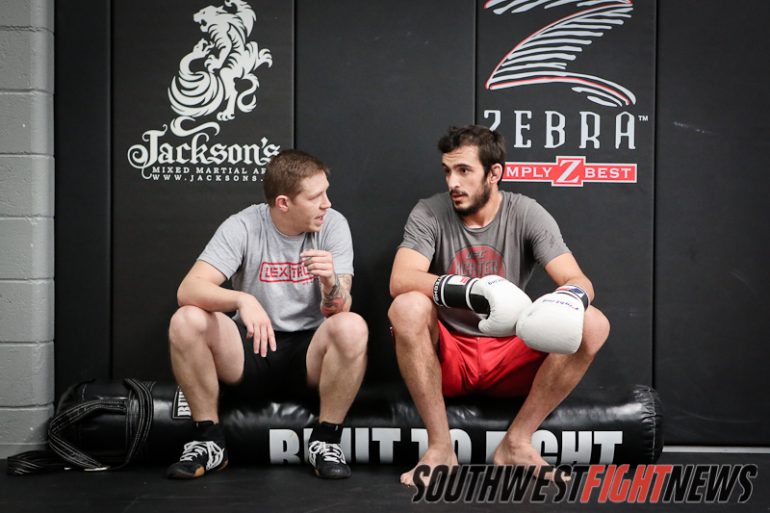 Often in the sports world, fans are captivated into following “feel good” stories. These are the types of stories that involve athletes making comebacks, breaking out into the spotlight or even living at the pinnacle of success. We as fans become emotionally vested and we start to follow the story from start to finish, embracing all the ups and downs of the journey.

New Mexico fight fans have that story with local mixed martial artist Quinn Mulhern (18-2) and his path from local fighter to UFC fighter. Originally from Santa Cruz, California, Mulhern moved to Santa Fe, New Mexico in 2004. He began his professional career in June of 2007 as a 22-year old fighting for the Gladiator Challenge on a show called Global War 65. The show was held in McGee Park and Mulhern would pick up a submission win via kimura late in the first round. The grappling prowess Mulhern used to win would only be a glimpse as to what would follow. He would rack up eight straight wins before losing to future UFC fighter Mike Guymon late in the fourth round of a title fight for the King of the Cage promotion.

The loss would not derail Mulhern in the least as he would begin 2010 with an upset win over UFC veteran Rich Clementi, earning a TKO victory that really put his name on the map. A few wins later and Mulhern hit the prospect radar being considered one of the top regional fighters. After winning 15 of 16 career fights, Mulhern would get the call to compete for the second most popular promotion in the world. Strikeforce would feature Mulhern on their “Challengers” series in June of 2011. Four years after his debut, Mulhern had finally been put into some national spotlight.

His first opponent would be Jason High and while it was the toughest named opponent Mulhern had ever faced, it also was the first time he would be matched up with a high profile wrestling based fighter. The bout would be fifteen minutes of High shooting takedowns and controlling the grounded Mulhern from top position. High would earn the unanimous decision victory and many would question Mulhern’s ability to beat high level wrestlers.

Spending his training camps in Santa Fe with the Santa Fe Brazilian Jiu Jitsu school headed by Head Coach Thomas Pless and boasting New Mexico fan favorite Angelo Sanchez, Mulhern worked diligently on his way to becoming a Brazilian Jiu Jitsu Black Belt. While his grappling was feared, his loss to High showed the need for evolution and progression. Mulhern did just that, winning his next three fights under the Strikeforce banner including a very emphatic win over accomplished grappler Yuri Villefort.

He showed improved striking and offensive grappling in those fights and would be paired with another UFC veteran in Jorge Santiago in what would have been Mulhern’s most high profile fight.

“One of the things that makes Quinn a crafty ground fighter is his knowledge and understanding of the positions he is in,” says Sanchez of Quinn’s grappling abilities. “He is a thinker and takes his time to execute the proper technique. He knows where you are going before you do. He is a true master of martial arts.”

Unfortunately, Strikeforce would be bought out by Zuffa, the same organization that owns the UFC. The exodus of Strikeforce fighters into the UFC began. However, Mulhern was reported as have not been one of the chosen fighters to be rolled into the UFC and his status in the big shows came into question. Mulhern himself expressed his concern and thoughts about not getting the call into the UFC but when an injury hit welterweight Sean Pierson a few weeks before this Saturday’s UFC 158 card in Montreal, Quebec, Canada; Mulhern was called in to step in on a month’s notice.

“I never believed the talk that I was in or the talk that I wasn’t. I believed it the exact moment I signed my contract. In other words, I did my best to not let the limbo get to me. At times it did, which was mainly related to the financial stress of only fighting once in 2012,” Mulhern continued, “Now that I’m in, I feel cautiously optimistic. But more than anything I feel confident about this fight in front of me. It is all that matters at the moment. Whether it’s in the UFC or some local show, it’s always the fight in front of you.”

The soft spoken Mulhern found himself matched up with a long time UFC fighter in Rick Story (14-6) and the match up would be monumental for multiple reasons. Mulhern had finally reached the pinnacle of MMA as he was signed by the sport’s most prominent promotion and he was to make his debut in the UFC representing a new gym. Just prior to the dissolving of Strikeforce, Mulhern had made what was usually a long drive down south to Albuquerque for some world class training into a permanent career move, transitioning his whole camp to a world famous gym.

“I moved out to Jackson’s right after the fight with Santiago was cancelled. I felt like I was going to be in Limbo a bit, and wanted to stay active during that experience,” says Mulhern. “I felt like Santa Fe was not challenging me as much as I would have liked, more as a city than because of the gym there. I had already been commuting to Albuquerque to Jackson’s so it was a no brainer. Santa Fe is where I began fighting and so it was a difficult move. But it has been well worth it.”

The move brought Mulhern to the same camp that fellow Strikeforce and current UFC fighter Isaac Vallie-Flagg calls his home. It also enabled Mulhern to stay with his Jiu Jitsu program at nearby Gracie Barra NM to compliment the world class training he was receiving in the Jackson-Winklejohn gym. His entry into the UFC will not be the easiest as Story represents an aspect of MMA that Mulhern struggled with in his Strikeforce debut. Story is a wrestling based fighter who has racked up wins against former top contender Thiago Alves and current top contender Johny Hendricks.

The match up will bring back into light the question as to whether Mulhern has adapted to the sport’s most common combat background. Adding in world class training partners and elite level coaches has only benefitted Mulhern and fight fans should be treated to watch an improved fighter taking on a tough challenge on Saturday night.

“I feel much more comfortable. I’m still critical of my wrestling but it has changed quite a bit,” he says. “The biggest thing for me is how I’m striking now. That is, with an eye for the wrestling game.”

Mulhern has a very lengthy fighting body, his long legs are ideal for front kicks and for highly efficient omoplata and triangle set ups. Mulhern’s Jiu Jitsu wizardry and his improved striking game however, is not the most dangerous part of the welterweight’s skillset. According to Sanchez, the talent runs deeper than an “on paper” skill set.

“One of the most important traits that Quinn has as a fighter is his ability to learn. He keeps an open mind and studies whatever he can and uses whatever he wants. He adjusts it all into his game,” Sanchez detailed and added, “The more we learn, the faster we grow. Only one of the many reasons Quinn is such a great fighter and teacher.”

Saturday night, will be a night of very solid fights. UFC 158 will be in the Bell Centre and New Mexico’s Quinn Mulhern will be on the undercard portion of the event. The event will also be co-main evented by a Welterweight top contender bout between former interim Champion and Albuquerque’s own Carlos Condit facing off with knockout artist Johny Hendricks. Make sure to tune in for the Facebook portion of the event that features Mulhern and then the PPV to catch Condit take on Hendricks.

As always stay tuned to SWFight.com for event coverage and analysis and for another SWFight blog documenting pictures and the pre-fight journey in Canada.

Cecilia Braekhus on Holly Holm and Why She Took Mia St. John Fight