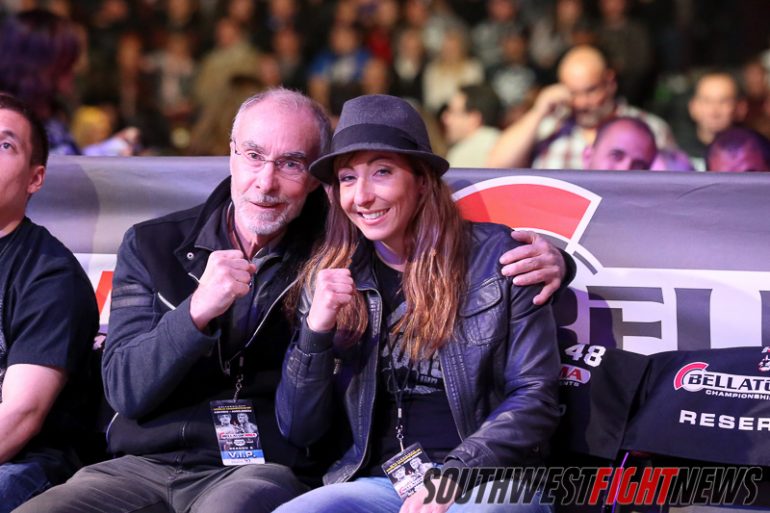 Tomorrow night Bellator MMA returns to our television sets for Bellator 94 which will be held inside the University of South Florida’s Sun Dome in Tampa, Florida. The promotion will return from a two week break in action and is highlighted by the lightweight finals between David Rickels and Saad Awad. New Mexico fight fans may remember the two fighters from their performances in Rio Rancho when both men beat their semi-finalist opponents at Bellator 91.

The evening will also be host to a very interesting battle between two women mixed martial artists, one of which calls her home Albuquerque, New Mexico. Heather Clark (5-3) will make her Bellator debut against Felice Herrig (8-4) in a Strawweight 115-pound divisional fight.

The two fighters have built interest in their match up due to some animosity stemming from comments Clark made about Herrig being “trashy” in her self-marketing. Herrig answered back with her own comments about Clark better being able to back up all the talk. The exchanges added some fuel to the match up and now the two will have their chance to put some martial arts behind their trash talk.

Training out of the Jackson-Winklejohn gym, Clark is looking to right the ship after losing a decision this past December to Stephanie Eggink under the XFC promotion. Clark is a dangerous opponent as she is well versed is several avenues of MMA including very crisp striking and good throws and takedowns. Clark has the ability to improve and be fully prepared while training with some of WMMA’s most talented fighters at the Jackson-Winklejohn gym.

“Hurricane” Heather Clark will have her hands full with “Lil Bulldog” Felice Herrig as the Team Curran fighter is a bully inside the cage. She is extremely strong in her punches and aggressive in her clinch and takedown game. She is known to be very durable and as her nickname suggests she is tough as nails and a danger on the feet and on the ground. Herrig has only tasted defeat by way of decision which is a testament to her toughness.

The fight should be a fun one, regardless of the “beef” between both fighters they both stylistically match up very well and it should be very interesting to see what each fighters game plan will be. Clark may enjoy the technical advantage but she may give away strength to her opponent as Herrig has even fought ten pounds heavier at flyweight.

SWFight.com sends our best wishes to Heather Clark and fight fans should stay tuned in for fight results tomorrow night as “Hurricane” fights “Lil Bulldog” on the Bellator 94 undercard.