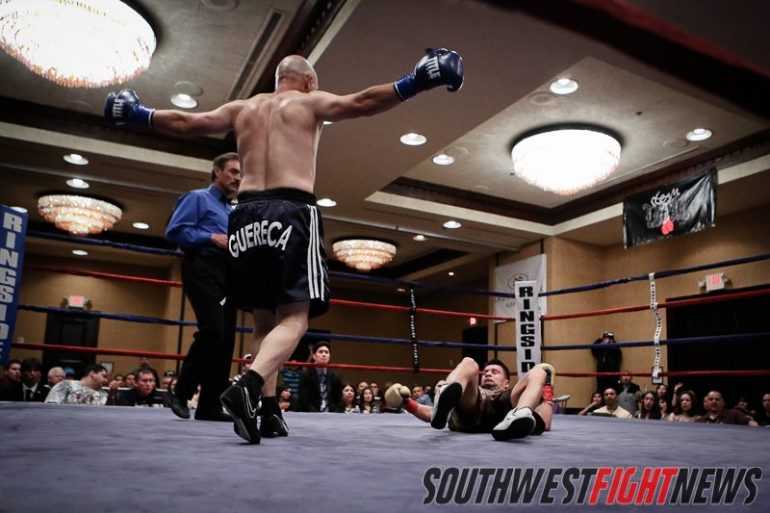 A day after one of the best boxing cards of the year, Johnny Tapia Presents: The Next Chapter 3 gave us the surprise upset so far of the year as well as a fight of the year candidate.

In the main event of the evening 39-year-old Bernardo Guereca roughhoused his way early on against Hector Muñoz. Guereca purposely grabbed Muñoz’ right arm for most of the round to the dismay of the crowd. Once the arm was free, Muñoz would land consecutive uppercuts with it.

As the men battled in the trenches, Guereca would force his forehead into the center of Muñoz’ chest, throw an over the top right and as he pulled his head from Muñoz’ body would land a very slick thunderous left uppercut. The punch would catch Muñoz solidly against the chin sending him flat on his back.

Muñoz would quickly attempt to stand back up but was extremely dazed and struggled to first get up from his hands and knees. He would beat the ten count but would stagger as referee Rocky Burke asked him if he could continue. Burke would rightfully wave the fight off with one second left in the round.

Guereca would follow suit by running around and celebrating around with his hands in air in the ring screaming “I want Pitbull! I want Pitbull!” Referencing Muñoz‘ teammate Josh “Pitbull” Torres who gave Guereca his last loss in a very tough fight.

The victory would end Guereca’s seven fight losing streak, making it his first victory since 2011.

It was supposed to be the toughest test for Cristian Cabral (5-0-1, 4KOs). He was of course facing his first first fighter with a winning record and King of the Cage

champion Donald Sanchez. After weighing in at just 143 pounds for the 147 pound weight limit contest many thought Cabral may have been over trained and drained to be able to use his power against Sanchez. They were all wrong.

From the onset Cabral used a long lead left jab to create distance between he and Sanchez who himself enjoys fighting in close quarters. Cabral’s right hand would become the theme of the bout.

“He was dropping his left hand a lot so I kept throwing that over the top right,” said Cabral.

Early on Cabral was able to catch Sanchez flat-footed and off balance. A powerful right hook from Cabral stunned Sanchez in the second. A head butt in that round would cause a cut on Cabral’s left eyebrow. The laceration would lead to a more determined Cabral who would follow up with wide but accurate punches.

As the bout continued Sanchez would attempt to continue to close the distance having some success against the ropes with short punches to Cabral’s body. Sanchez would start deflecting many punches in the fourth but failed to counter. That success would not come until the final round where Sanchez showed a great deal of urgency by chasing Cabral around the ring looking for a necessary knockout.

Cabral who was running out of steam would ride the ropes trying to avoid Sanchez‘ big shots. Finally, once in the center of the ring Sanchez was able to seriously hurt Cabral to the body throwing at will, once against sending Cabral in retreating around the ring. Sanchez would bring the heat for the last 20 seconds of the contest and receive returned fire for Cabral who was attempting hold on to an already decisive victory. The bell would end the contest.

“He was a tough guy and I proved everyone wrong,” said Cabral of his impressive performance. Cabral would go on to call out New Mexico junior welterweight fighter Matthew Baca (2-1) who just the night before received the first loss of his career.

The contest started out with Villafuerte getting comfortable with the ring in only his second career fight and first bout since his debut loss against Siju Shabazz. The feeling out process was mutual early on for Adrian Lopez as well.

Villafuerte would throw from a wide but effective stance. The delivering of wide punches would open him to getting caught by Lopez’ strong short punches. After appearing to give up the first round, Lopez would go on to impose his will body punch his way to a unanimous decision.

The first two rounds saw these men trade knockdowns both of which appeared to be caused my fouls. The first came in the form of Paul Castillo throwing a hard over the top right hand that did seriously hurt Diego Bautista but would floor him in combination of an inadvertent trip not seeing by the referee.

The second knockdown came as the crowd chanted “Diego! Diego!” Castillo would join them by mocking the chants of his opponents name and waving his hand in the air. This moment of carelessness opened the opportunity for him to get caught by a serious three punch hook combination to the face capitalized with an over the top right hand to the back of the head. Castillo would struggle to get up and once action resumed Bautista appeared to at one point have Castillo out on his feet. Castillo’s arm would dangle on the top rope for a few seconds but a straight right from Bautista would reawaken him.

Regaining his composure in the third Castillo would look to time a tired Bautista. Both men were patient but is was a huge right cross from Castillo that would highlight the round. Bautista would shake the punch off by dancing (think Adrian Broner).

The final stanza would be controlled by Castillo’s pressure and speed. Bautista’s punches would lose their accuracy but would find a home in the final ten seconds of the fight.