Cecilia Braekhus on Holly Holm and Why She Took Mia St. John Fight 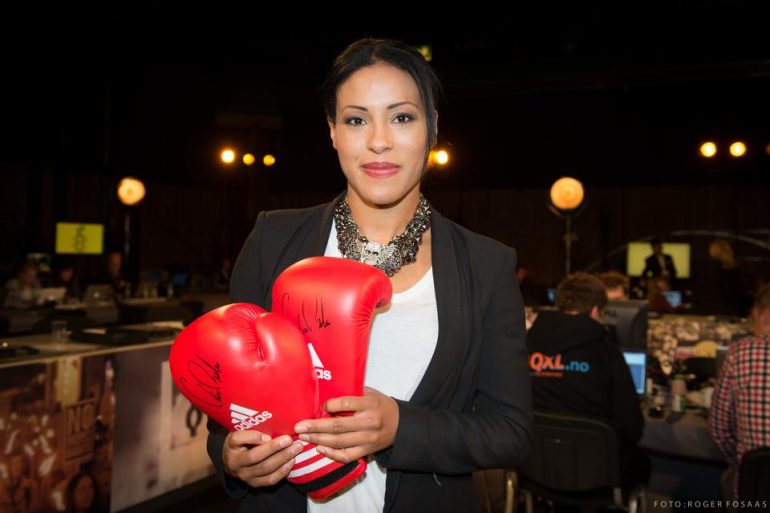 Recently we reached out to Cecilia Braekhus and her promoters at Sauerland Boxing with a list of questions. The questions mostly hovered over the topic of Braekhus and the other widely considered pound for pound female boxer of the world, Albuquerque, New Mexico’s Holly Holm. It took several days but her Braekhus’ promotion was finally able to provide her responses.

Below is a question and answer exchange we had with the WBA, WBO and WBC Welterweight champion of the world.

SWFight.com: Are you surprised that Holly Holm announced that her next fight would be in MMA, a day after the WBC ordered for the two of you to face off?
Braekhus: No, not really, because they just turned down an offer from my promoter about a fight this summer
(*SWFight.com Note: The order of events were as actually as follows:
January 22, 2013 – WBC orders purse bid
January 25, 2013 – Braekhus announces fight with St. John
January 28, 2013 – Holm agrees to fight on Bellator
March 5, 2013 – Holm – McGee fight announced)

SWFight.com: Why is it that you think the fight has not yet happened?
Braekhus: She [doesn’t] wanna fight outside [Albuquerque]. We have offered a fight in Germany or Denmark. I am also willing to come to the US, but we will not go to her backyard. [There have been] too many weird stories coming out from there, and they also dont`t have TV-rights – and this fight needs to go live on TV! I have been boxing all over the world as an amateur, and with professional boxing banned in my homecountry Norway, I have boxed in Germany, Switzerland, US (Miami), Finland and Denmark as a pro. I really don`t care where the fight is, but as I say putting this big fight in [Albuquerque] is not right. It needs to be broadcasted.

SWFight.com: Why did you choose to fight Mia St. John next? What other fights were available?
Braekhus: I chose Mia because she is a living legend, and I want to fight her before she retires.

SWFight.com: Is there anyone out there that you would like to fight besides Holm?
Braekhus: Yes,  we still want Holm but we are also in [talks] with world champion Frida Wahlberg and now that Layla McCarter is world champion she is also wery interesting. We were also talking to Hanna Gabriels but she just lost [by] KO. Christina Hammer is also an option. There will be a lot of strong opponents [for] me in the future. I dont need Holm but I want to fight her.

SWFight.com: Is a fight with Holm still possible for this summer?
Braekhus: Ask her. They have been given an offer and I am available and would love to fight!

SWFight.com: Holm’s camp claims that you are avoiding her despite the fact that you made a video to challenge her. What would you like the people in Albuquerque to know about the negotiations and why the fight is currently not happening?
Braekhus: We have been chasing Holm for two years. I hoped the video would make her take the fight. But she did not.  She went to MMA

SWFight.com: Would you ever consider fighting Holm in Albuquerque?
Braekhus: I dont think so. I have been told by too many too often, “dont go to there to fight’. And like I said before this fight must be broadcasted.

SWFight.com: Please by all means share any additional thoughts or feelings that you would like boxing fans in the United States to know about your career and the fallout of the fight with Holm.
Braekhus: I will be the [pound for pound, number] 1 with or without her, simply by fighting the best. if Holm dont fight me she will be forgotten in one year anyway. I am still hungry and I have the best team around me. We will make the biggest fights and make a big mark in women’s boxing  [for] years to come.
***
Tomorrow we will have Holly Holm’s camp’s response to Braekhus.

Quinn Mulhern gets the call to the UFC, faces off with Rick Story at UFC 158