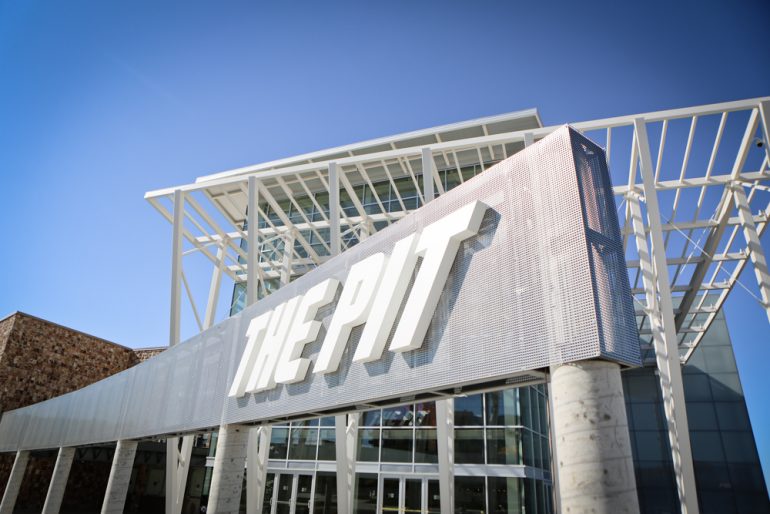 One of the most famous venues in the entire country, "The Pit" is home to the University of New Mexico Lobos but it has combat history within the walls as well.

It is well-known that the Ultimate Fighting Championship (UFC) is the pinnacle of MMA. From employing just about every fighter within the world top-10 rankings in just about every weight class from 125-pounds to heavyweight and having the most successful pay-per-view model currently in combat sports; the UFC is the sport’s biggest and brightest stage and yet, the promotion has yet to come to one of MMA’s premier and storied areas.

How is it that New Mexico contains one of the richest MMA cultures and has yet to host a UFC show?

The answer of course is much too complicated to provide a simple answer. With a regional circuit like New Mexico’s that hosts fighters from the world-renowned Jackson-Winkeljohn gym and the droves of talented fighters from all of the respected gyms within the state it is hard to rationalize why we have yet to attract one of these big time shows. When the World Extreme Cagefighting (WEC) promotion came to Albuquerque for WEC 32, fight fans couldn’t predict then that it would be the biggest event to ever visit New Mexico. While Bellator 97 rivaled that show with the featuring of Ben Askren and Michael Chandler, WEC 32 on paper still tops it with their inclusion of Carlos Condit, Leonard Garcia, Damacio Page, Jamie Varner and Miguel Torres all of whom were highly ranked in their respective divisions. In fact, that card featured three title bouts which was arguably highlighted by number one ranked Bantamweight Miguel Torres defeating Chase Beebe. If we are talking entertainment value, while Bellator 97 had some notable names, the show was anti-climatic in the context of what the paper offered on-paper; WEC 32 delivered the names and local stars as well as exciting fights throughout the fight card.

Could Carlos Condit be one of the catalyst for a potential UFC show in New Mexico? Is his drawing power compelling enough for the UFC to see New Mexico as a future destination?

Since that show took place back in early 2008, promotions such as Bellator MMA, Xtreme Fighting Championship (XFC) and the MMA Fight Pit have all tried their hand in conquering the area’s demographic and have failed to fill up the venues of choice. Maybe the lack of fan support has kept the big dog of MMA, the UFC out of the state or there is the possibility that the companies who have visited do not realize that with proper marketing and advertisement that they could dominate the area selling out any venue they choose.

While we here at Southwest Fight News aren’t in the promotion business, as media members and individuals very experienced in the areas of marketing, PR work and within the fight business, we see that there are so many holes that can filled that these promotions have yet to work on.

So, maybe next year right? Maybe even this year?

Well according to the line-up the UFC has announced, we may not be in their radar anytime soon. After all, as of the publishing of this article there is not any sort of booking of the larger venues in Albuquerque that could host the tremendous size of a UFC show. From an MMA Fighting article posted a few months ago:

The UFC’s 2014 schedule will also include:

While the quote doesn’t necessarily rule out a debut in New Mexico, a telling quote from UFC President Dana White indicates that the Mexican market is a higher priority than New Mexico.

“We’re looking to go to Mexico, go back to Chicago, Vegas, we’re going everywhere like we always do,” White said.

It seems as if the Mexican market could lead to the UFC jumping right over our area as they seem to be planning a run across the border with mega-star and Heavyweight Champion Cain Velasquez.

Their were rumblings back in late-2006 and early 2007 that the UFC was looking into breaking into the New Mexico market riding on the strength of popularity of Diego Sanchez. The New Mexico native was 17-0 and was quickly becoming one of the UFC’s biggest stars due to his undefeated record and entertaining personality on the first season of the ground breaking reality TV series, The Ultimate Fighter. Unfortunately, Diego would lose two bouts in a row which took some heat off of his hype and he would end up leaving for San Diego after some well-documented gym issues.

As a matter of fact according to a source back in 2006, the UFC 74 event was supposed to be hosted by Albuquerque where The Pit would most likely be the venue of choice. Details from that story over seven years ago:

The UFC 74 event slated for Aug. 25 will take place in Albuquerque, New Mexico,
according to a TV sports broadcaster who cited local fighter Diego Sanchez as his source.

The rumor of the potential event surfaced yesterday after a
news broadcast on KOAT, the local ABC affiliate in Albuquerque, reported that
the city would host the upcoming event.

Of course, this never happened and for undisclosed reasons the plans fell through and haven’t been revitalized.

After the losses from Sanchez, New Mexico was left without a fighter with explosive “star power” and thus the likelihood that the UFC would come to town was torn down to nearly improbable levels. Carlos Condit was a big time star in the WEC but the promotion remained the less popular show owned by parent company ZUFFA which operated both the WEC and UFC. Perennial main eventers Keith Jardine and Rashad Evans both trained here in Albuquerque but neither had the fan-base from the locals being that they were not born and raised products of our area. 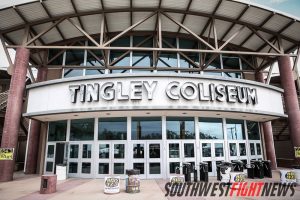 Where would a potential UFC event be held? While many point to “The Pit”, could venues like Tingley Coliseum (pictured) or the Santa Ana Star Center be possible destinations?

With the Jackson-Winkeljohn gym based in New Mexico, where all sorts of elite and ranked fighters train why wouldn’t the UFC welcome the opportunity to be broadcasted in a place many over the years have considered the “Mecca” of MMA. The complicated answer can be easily broken down in part to a few contributing factors. Examples of those factors are lack of a superstar and the inability of promoters to sell out a big-time venue.

For starters, where would the UFC house their big-time event that consistently sells tickets in the neighborhood of 5-10 thousand tickets? The world-famous NCAA sporting venue “The Pit” is the obvious answer due to the fact that it could hold close to 15-thousand people inside but even the biggest shows in New Mexico’s combat history have struggled to manage even 2-thousand in ticket sales. The late Jonny Tapia in his prime may have been able to pull the numbers to sell out the massive venue but could potential headliners Carlos Condit, Jon Jones and John Dodson bring in a sell-out crowd?

If the UFC were to invade Bellator MMA’s stomping grounds in New Mexico they would have 7-thousand seats to fill in the Santa Ana Star Center but even the best Bellator show in New Mexico has yet to sell even half of that capacity. Tingley Coliseum is even smaller at about 4-thousand seats and may not represent enough potential revenue at the gate to justify bringing in the show.

Is that the reason that the UFC isn’t visiting? Is it because we just don’t have a venue that can host the promotion’s enormous needs to put on their show?

Even the UFC-cooperative company Invicta FC isn’t making plans to come to the area. Invicta FC is the all-women promotion that is home to just about every top ranked women fighter who isn’t competing within the UFC. Invicta FC is linked tightly with the UFC as women fighters can leave Invicta FC to fight for the UFC and those who may fall on hard times in the UFC can switch back to Invicta FC. The promotion could be a new promotion that would come to New Mexico, feature top women fighter Holly Holm and find tremendous success. Especially with other women fighters being based from the area; Invicta Champion Michelle Waterson and Invicta standouts Jodie Esquibel and Angelica Chavez. Now consider some of the other talents in the area including newly signed Invicta fighter Amber Brown, Brenda Gonzales and Norma Center and you have a card full of New Mexico’s finest and the possibility of a sell-out crowd.

Maybe our market isn’t fully developed to high-profile standards; Bellator MMA saw a less than impressive crowd for their last show, Bellator 105. There were empty rows on the floor and so many vacant seats in the arena regardless of price range. While the main card was tame compared to previous Bellator events, the local fighters on the card were very popular and still the turnout was marginally unimpressive.

What type of event would the UFC even bring to the area? If they intended to do a show at “The Pit” it would have to be high-profile as the venue is very large. A pay-per-view or the UFC on FOX type fight cards would be a must and would the UFC feel that our market was ready for that type of event? Do they believe Carlos Condit could sell 15-thousand or do they think New Mexico fight fans would come out in the thousands just on the UFC name alone? If they brought a “Fight Night” event to the smaller venues, would it have the necessary fighters headlining to draw the buzz to get up to 5-thousand in the seats? It seems as if local promotions struggle immensely to hit the one-thousand plateau and the UFC would need between five to fifteen times that amount for their live gate to be potentially worthwhile. 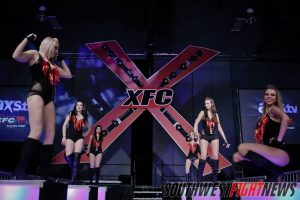 The XFC was one of the new promotions to break into the New Mexico market in 2013. Did the XFC and Bellator MMA make enough of a splash to entice the UFC to bring their show to the state?

That brings us to the idea that we don’t have a “star” in New Mexico that can bring the buzz to the town in the way that Johnny Tapia once did. Maybe Carlos Condit and Diego Sanchez could do it but we’d never know unless the UFC took a chance on it. Condit is in line for a title shot with a win in his next fight and that type of excitement may be able to bring the buzz. Does Jon Jones have enough New Mexico support to bring in a crowd? Sure, the Light-Heavyweight Champion and one of MMA’s Pound-for-Pound kings is a worldwide draw but how would he do in this much smaller market?

Maybe with the Mexican fighters out of the Jackson-Winkeljohn camp being pushed into the spotlight, a fighter like Erik Perez could become more valuable to a possible New Mexico show. Or could the reemergence of Tim Means, Damacio Page and Leonard Garcia in Legacy FC down in Texas translate over to New Mexico where a possible show in Albuquerque could be something to get the fans buzzing?

Whatever the case is fight fans, we should all just hope that more premier MMA action will come to our area. Until then, it is our duty to show up to events which in a domino-effect will inform more MMA promotions that New Mexico is ready for a big-time, blockbuster event.

Tell us what you think fight fans! Why hasn’t the UFC visited the “505” and what do you think should be done to entice the promotion to bring our state one of their shows? Chime in with your thoughts in the comments, on Facebook or on Twitter!