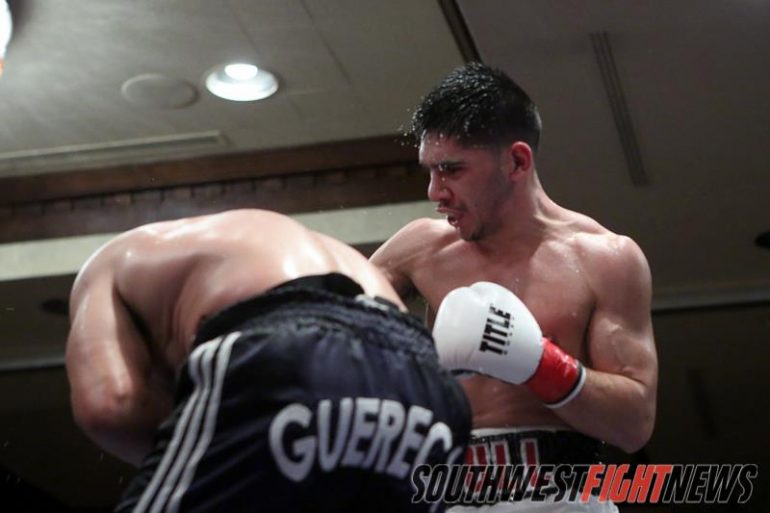 to pressure and confuse Torres for the first half of the fight. The 39-year-old Guereca was able to impose his will by attacking Torres and constantly switching from southpaw to orthodox, being effective in both stances.

“The style took me a while to figure out,” said Torres. “It was frustrating me.”

It was in the fifth that Torres would compose himself and heed his corner’s advice and dance.

“We had to box,” said Torres‘ trainer Chris Chavez. “The KO wasn’t coming. We know he would switch stances but his shots weren’t hurting Josh.”

“This fight was an eye-opener,” said Torres despite the convincing victory. “I have a lot to work on.”

Check out the following link for a round by round breakdown of every fight from list night: http://swfight.com/2013/02/01/johnny-tapia-presents-the-next-chapter-ii-quick-results/

Muñoz Too Much for Torres

As soon as the bell rung Hector Muñoz (21-9-1) immediately attacked Jeremiah Torres (7-22). Despite be bullied the entire first round Torres had several moments, picking Muñoz who was going for early KO.

The wide punches from Muñoz left him exposed to two and three-shot combinations that did little damage.

It would ultimately be Muñoz‘ power punches that would allow him to win the first two rounds and retire Torres on his stool at the end of the second round.

It was a fight uneven on paper but similar in the appearance of the participants. In fact, Shabazz has more New Mexico Golden

Gloves State Championships (7) than the reported amount of amateur fights Anthony Jones had (5).

Despite having a height and arm length advantage the former heavily decorated amateur fighter Shabazz was reluctant to use it. He instead showed off his speed on the inside. Jones was able to catch Shabazz with sporadic over the top strikes  but failed to pursue and fall back to a turtle-shelled defense which he had no offense from.

A huge right hook from Shabazz on the second rocked Jones whose glove touched the canvass forcing the referee to issue a standing eight count. The end of the contest would shortly after as big right uppercut to Jones‘ chin would drop him. He would not respond to the referee’s count this time.

Crespin Conquers Gonzales in Decision Most of Crowd Called Controversy

The most anticipated fight of the evening was also the most controversial. In what could have easily been the main event, based off of fan support, Amanda Crespin was awarded a unanimous decision over Brenda Gonzales.

The contest began with Gonzales establishing a strong effective lead jab, easily changing levels with it. Gonzales length did not

allow Crespin to establish a rhythm for most of the fight.

Most of Crespin’s punches appeared to roll off of Gonzales’ broad shoulders. Crespin did find modest success with looping shots but it appeared that the counter-punching and accuracy of Gonzales dictated most of the action.

It was in the third that Crespin had her best moment as she countered a one-two combination by Gonzales with a a three punch combination of her own. Both women were bleeding from their nose and breathing deeply going into the final stanza.

The last round saw the women trade huge right crosses. A four-punch combination was capitalized in the frame by Gonzales.

When the decision was announced to the crowd scores of resounding boos came from Gonzales’ supporters and neutral supporters alike while Crespin’s followers cheered boisterously.

The media seated to the southend of the ring, including SWFight.com, had the bout scored 39-37 in favor of Gonzales while the media on the north end had the same score as the judges, 39-37 for Crespin. Another writer had the fight a draw.

“I think I could have done more,” said Crespin. “I knew I was outboxing her though.”

Going into the fourth and final round Crespin says that her corner told her that the bout was close. “They told me I had to put it on her,” she says.

As far as the reaction from the crowd Crespin said that it was natural. “Her crowd will always have her back and mine will do the same for me.”

Crespin said she is open to a rematch with Gonzales.

It was the first time Gonzales, the King of the Cage super flyweight champion, had tasted defeat in the boxing ring or mixed martial arts cage.

“It irks me,” said an earnest Gonzales. “Right now I just want to get back to MMA. Boxing is political as (expletive).”

The first round saw a huge right cross for Castillo stun Hogue, dropping him to the canvass. On two separate occasion Castillo was able to land punches strong enough to knock out Hogue’s mouthpiece.

It was Hogue’s roughhousing that gave him his moments in the bout. The contrasting styles made for a fight that excited the crowd.

“Even though he smothered me I was able to catch him with body punches,” said Castillo. “I need to go back to the gym and work angles.”