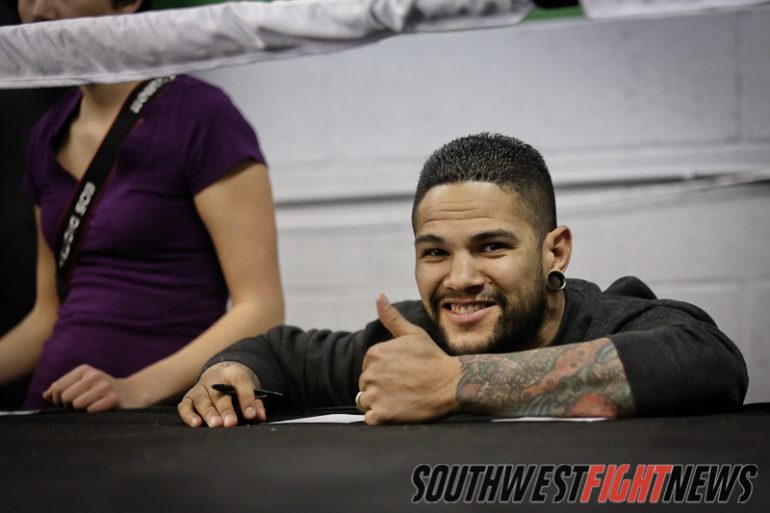 The biggest show to hit New Mexico in some time is nearing very close as the heavily anticipated Bellator 91 event will be live inside the Santa Ana Star Center in Rio Rancho on Thursday February 28th. While Bellator MMA is a country wide promotion traveling from state to state, one common theme for the promotion is that it stacks their under cards with local talent. This show will be no different as Bellator MMA went and signed several very popular and very good New Mexico fighters.

For New Mexico fight fans the evening should be a very promising one as the competitors and match ups already look very exciting. However, SWFight.com thought this to be the perfect opportunity to introduce fight fans to the local New Mexico athletes competing on Bellator 91. In part one, we introduced fan favorite Holly Holm and prominent northern fighters Joshua Montoya and Angelo Sanchez.

The Judgement MMA fighter has made his splash in the sport in 2012 as he fought twice under the King of the Cage banner and came out victorious and impressive on both occasions. He grinded through a grappling war in his first bout and overcame adversity early in the second when opponent Derek Cranford had him hurt, Cruz answered with a takedown and laser quick transition into a rear naked choke.

Cruz has found himself at a very exceptional gym training under head coach Scott Marlowe. Under that coaching, Cruz brings him with him his natural power and strength and adds to it the technical prowess that Marlowe teaches and that is just speaking of his stand up game. Cruz is a very powerful grappler and explosive wrestler, able to scoop in on a single or double leg to control where the fight takes place.

Cruz has yet to be defeated in his professional career and a win under the Bellator banner may just propel him past the handful of top prospects in our region. Cruz is signed to face off with Jackson-Winklejohn’s Nick Gonzales.

Since his debut in 2009 as an amateur, Gonzales on average has only fought about once a year. While he has an unblemished record, his inactivity has left loads to be desired from the talented fighter. He ended a near two year layoff this past September when he fought for the Jackson’s MMA Series and ended his fight quickly submitting Gene Perez with an arm bar about two minutes into the bout.

Nick Gonzales is extremely durable and that is a testament to the training partners he has trained alongside for years. His ability to survive and scramble to good position makes him a tough fight for anyone as he is extremely difficult to get the upper hand over. The striking game influenced by top names Brandon Gibson and Mike Winklejohn is crisp and technical and his grappling is top notch as seen by his three submission wins out of five career fights.

This will be the most active Gonzales has been since his amateur run in 2009 and it will be welcomed as the talented fighter showed his intrigue in his last outing. He doesn’t have an easy fight on his hands as the powerful Adrian Cruz from Judgement MMA is his Bellator 91 opponent.

The phrase “flying under the radar” works well for the Mean 1 MMA fighter coming out of Rio Rancho where Bellator 91 will be taking place. Kevin Croom has found himself on a peak in his career where his success couldn’t possibly be any higher for the moment. After a hard fought three round unanimous decision in November of 2012, Croom started 2013 off with a bang with a highlight reel knockout over Brian Davidson on the RFA event held in Kansas City. It would take Croom less then 60-seconds to end the fight with punches.

Croom is versatile in his fighting style, he can trade punches and take the fight to the ground and work his grappling. He has finished fights by strikes and submission as well as winning fights that go the full fifteen minutes. Croom’s style is very pressing, constantly moving forward or pushing the pace even in powerful striking exchanges.

While the Davidson knockout was spectacular, his Bellator opponent will assuredly give Croom all he can handle and then some. His original opponent Angelo Sanchez had to pull out due to injury and in his place Ran Weathers (16-13) stepped in. Weathers has been around the MMA game for an extensive amount of time as he is a veteran of nearly thirty professional fights.

Bellator 91 Updates: Sanchez and Chavez out, Weathers in and Holm’s opponent named