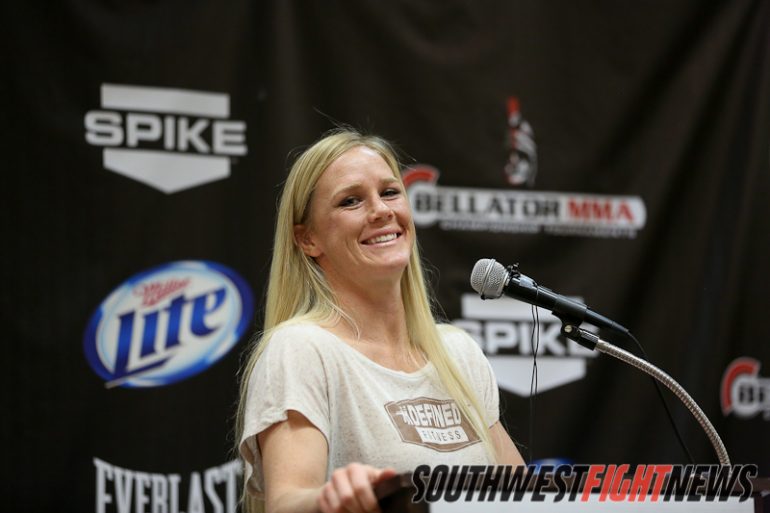 The biggest show to hit New Mexico in some time is nearing very close as the heavily anticipated Bellator 91 event will be live inside the Santa Ana Star Center in Rio Rancho on Thursday February 28th. While Bellator MMA is a country wide promotion traveling from state to state, one common theme for the promotion is that it stacks their under cards with local talent. This show will be no different as Bellator MMA went and signed several very popular and very good New Mexico fighters.

For New Mexico fight fans the evening should be a very promising one as the competitors and match ups already look very exciting. However, SWFight.com thought this to be the perfect opportunity to introduce fight fans to the local New Mexico athletes competing on Bellator 91.

“The Preacher’s Daughter” is regarded by many as being one of the best boxers of all time and that is exceptional considering she started her combat career as a kickboxer. She has been boxing since 2002 and is currently the WBF, IBF and WBAN World Champion and the Albuquerque born and raised fighter is making her transition back into MMA where her kickboxing ability is once again the focus point in her career.

Trained by famed striking coach Mike Winklejohn, Holm has already stopped her first two opponents in mixed martial arts by kicks. She wore down Christina Domke with legs kicks and eventually had the fight stopped when Domke could no longer continue absorbing damage from leg kicks. She would follow up the impressive win with a domination of veteran Jan Finney that would see the fight end with a powerful kick to the body that folded Finney.

Training at the popular Jackson-Winklejohn gym in Albuquerque, Holly has a healthy dosage of quality training partners both male and female. While her opponent has yet to be announced, fight fans should be excited for Holm’s return to MMA and can be assured the fight will be an exciting showcase of world class striking from the boxing pound for pound queen.

The “San-I Warrior” fights out of Pojoaque and is one of Northern New Mexico’s most popular and polarizing figures in mixed martial arts. He has fought in his home state thirteen times out of his fifteen professional bouts, being showcased several times at the Buffalo Thunder Resort & Casino just north of Santa Fe as well as Mescalero where both of his epic bouts with Albuquerque’s Donald Sanchez took place.

Sanchez is the former King of the Cage 145-pound champion and since mid-2008 has won ten of eleven fights losing only a razor thin split decision to Donald Sanchez in 2010. While he trains out of his own facility, the still fairly new Warrior Training Center; Sanchez still trains with the camp he was part of for years in the Santa Fe Brazilian Jiu Jitsu academy where he trained alongside newly signed UFC fighter Quinn Mulhern.

Submission grappling has been the bread and butter of Sanchez, finishing seven of his pro fights via some sort of submission. In past fights, the durable Sanchez has worn down fighters with his stand up skills while setting up the fight to hit the mats where he has impressively submitted his last four opponents. Sanchez will be matched up with Mean 1 MMA’s Kevin Croom on February 28th.

The “Destroya” is a product of Santa Fe where he has lived and trained for the entirety of his career that has spanned more then four years. Still in his early 20’s, the young athlete runs his own gym where most of his training camp takes place. The Alchemy BJJ gym boasts several young talents, including amateurs that have found great success in the kickboxing scene as well as winning several grappling events.

When he isn’t at his home gym, Montoya trains under the tutelage of striking coach Scott Marlowe in the Rio Rancho Judgement MMA gym alongside teammate and fellow Bellator competitor Adrian Cruz. Montoya has turned his career around after a three fight losing streak to three straight undefeated fighters, resurging with two straight wins heading into his Bellator bout.

Montoya has probably the most difficult draw of any of the local fighters appearing on the card as he was matched with Bellator mainstay and former title challenger Ed “Wild” West. High stakes are on the line for the promising young talent from Santa Fe and fight fans will be able to see the progress Montoya has made in preparation for this high profile bout.