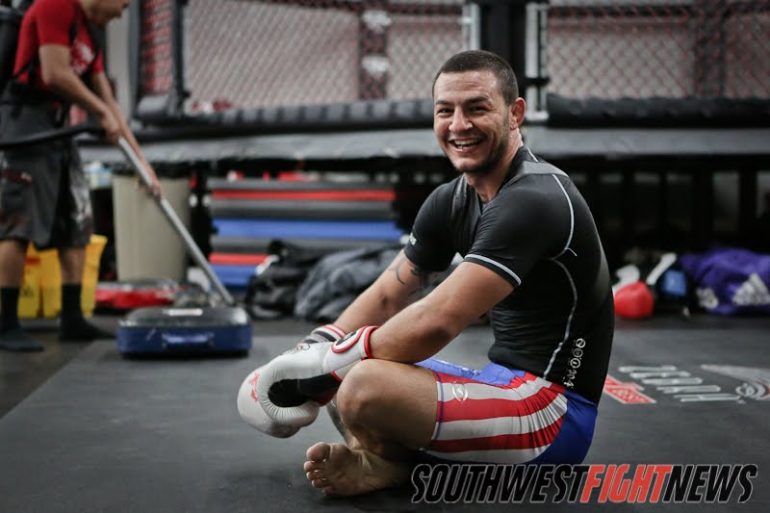 While many will be winding down from Valentine’s Day, fight fans will be ready to put the romance in the past and replace it with some mixed martial arts on February 16th, 2012. The Ultimate Fighting Championship (UFC) will be live inside the Wembley Arena in London, England for the UFC on FUEL 7 event that features a bantamweight interim title fight between Michael McDonald and interim champion Renan Barao. For New Mexico fight fans however, the co-main event will be the featured bout.

In what could possibly end up being a number one contender bout, Jackson’s-Winklejohn’s Cub Swanson (18-5) will take on short notice replacement and top featherweight Dustin Poirier (13-2). Swanson was initially matched up with kickboxer and fellow top contender Dennis Siver. The bout will not get any easier as Poirier is tough as nails and is coming off a very dominant submission win in his last outing this past December.

The Albuquerque-based Swanson will bring his impressive skill set into the octagon riding high on the heels of three consecutive stoppage victories over top opponents. Since January of 2012, Swanson has knocked out George Roop, Ross Pearson and most recently Charles Oliveira in spectacular fashion. The powerful striker is poised to make his title run and beating Poirier will cement his place as contender for the title that Champion Jose Aldo holds.

Dustin “Diamond” Poirier as his nickname suggests is as tough as a diamond and that was best shown in his Fight of the Year caliber throw down with the “Korean Zombie” Chan Sung Jung last May. While Poirier would lose the bout, he would show the world and most importantly his division that he was one of the toughest opponents to be matched up with. Poirier is a dangerous finisher as he has finished eleven of thirteen career opponents.

The American Top Team fighter has shown his ability to not only win in his striking exchanges but finish the fight with powerful submissions. He has won twice by Brabo Choke and once with an Arm-Triangle during his UFC tenure that has seen Poirier go 5-1 in his six UFC bouts. While taking the fight on weeks notice, Poirier has a huge opportunity to get back atop the division ladder with a win over a streaking Swanson.

The fight will be compelling for fight fans as Swanson has been on an absolute tear dominating all his opponents with his prolific striking. Swanson’s kickboxing acumen has led to opponents being caught with the big power punches and during his three fight win streak a fight has not seen a third round. Poirier however will have the skills to push the fight to the mats where his positional control and ground and pound could make a difference if Swanson is unable to use his rarely utilized ground skills. The style clash tends to make the difference in the fight outcome as the fighter who bests utilizes the game plan comes out on top.

A win over the tough Poirier puts Swanson in front of the line in the 145-pound division and a chance at UFC gold. Poirier will also be a true test to Swanson’s finishing ability as Poirier has never been stopped in his four year fight career. Stay tuned to SWFight.com for fight results and more New Mexico local fighter coverage.

Torres vs Sanchez, Baca vs Hernández set for March at Wool Warehouse