Bellator 91 Updates: Sanchez and Chavez out, Weathers in and Holm’s opponent named 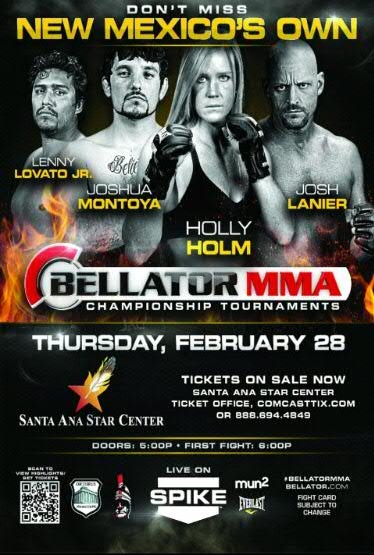 Some prominent updates coming our way concerning Bellator 91 scheduled for February 28th inside the Santa Ana Star Center. The card is stacked with local fighters from all different parts of New Mexico and representing several prominent gyms. One of the most exciting and intriguing additions to Bellator 91 was the announcement of Holly Holm, the most popular and successful combat athlete arguably in all of New Mexico.

We last saw Holm in the cage in September of 2011. He return to MMA was a bit of a shock to most but after a prompt search for an opponent, weeks before the event, fight fans finally find out who will be opposing her on February 28th.

Undefeated Katie Merrill (1-0), fighting out of Wai Kru MMA in Brighton, Massachusetts, will have a big opportunity early in her career as she will look to upset Holm in her hometown. With a Muay Thai style and experience in both amateur and professional MMA, Holm should have a game opponent standing in front of her as this match up seems to be fitted for a striking showcase for New Mexico fight fans.

The combat sports experience will lean heavily with Holm who is a veteran of 37 boxing matches and is widely considered the top pound for pound female boxing champion.

The injury bug has struck the Bellator MMA card as the news came out of northern New Mexico premier mixed martial artist Angelo Sanchez being forced out of his scheduled bout with Jackson’s-Winkeljohn/Mean 1 MMA Fighter Kevin Croom due to injury. Taking the place of the “San-I Warrior” will be veteran of regional MMA, Ran Weathers (16-13). Weathers has bounced around the regional scene fighting in several parts of the country and training at several different prominent gyms in Albuquerque including opponent Croom’s current stomping grounds.

Update: Croom vs Weathers is currently off.

Croom’s teammate Felipe Chavez was also forced out of the event with an injury. “Flip” will be replaced by rising local star Andres “Bullet” Quintana (3-1) and he will take on Lovato’s Total Fitness fighter Russell Wilson. The Roswell native now training out of Jackson-Winklejohn’s will get the tough assignment of preparing in under two weeks to take on the stand out wrestler in Wilson.