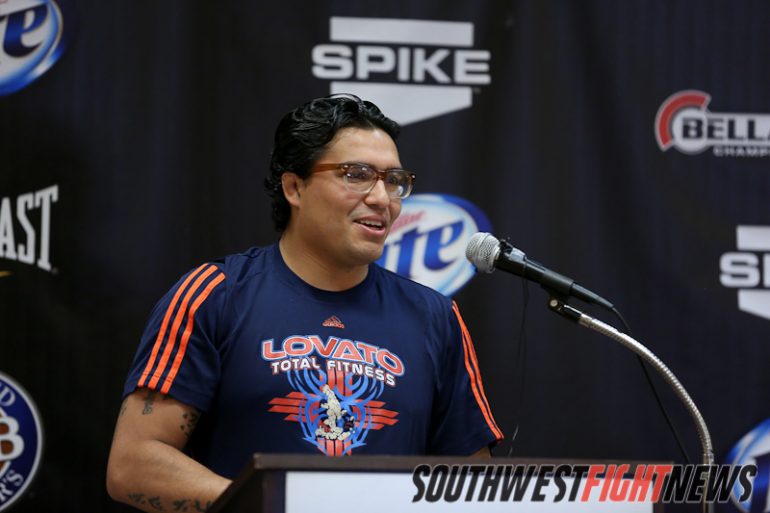 Long time followers of regional New Mexico combat sports are in for a surprise treat when Bellator MMA makes its debut in Rio Rancho. Bellator 91 will be live inside the Santa Ana Star Center on Thursday, February 28th, and the promotion put together a very interesting under card full of local fighters.

The “Godfather” makes his return to the cage after a two and a half year hiatus from active competition.

Lenny Lovato Jr. (8-1) will once come out in front of a hometown crowd, the Southwest Cage Association “Duke City Brawl” veteran has spent most of his career fighting in Albuquerque and will now just travel several minutes down the road to Rio Rancho. Lovato hasn’t seen action since mid-2010 where he competed down in California for the Tachi Palace Fight promotion and he was scheduled to compete at the inaugural MMA Fight Pit held in The Pit against Junie Browning before an injury forced him to pull out of the event.

Typically competing at lightweight, Lovato will welcome former WEC fighter Blas Avena (7-6) into his home state and the pair will be competing at the 170-pound welterweight limit. Hardcore fans may remember Avena from his six fight stint for the WEC promotion including big time fights against former UFC fighter Tiki Ghosn and Dave Terrell.

A black belt in Brazilian Jiu Jitsu from the Machado BJJ gym in Las Vegas, Avena is world class in his submission arsenal and very explosive in his grappling acumen. His skill set creates a very interesting style clash to oppose Lovato’s. The two may be comfortable on the ground but for two very different reasons as Lovato is a very strong and technical wrestler, looking to close the distance to get a takedown where he uses very strong position to open up ground and pound. Avena, the Jiu Jitsu ace is more explosive hunting for submissions and has a very dangerous guillotine choke.

The guillotine choke has primarily been kryptonite for wrestlers as shooting single and double leg takedowns tend to leave the wrestler’s neck in position for the choke. However, to counter that idea it is predominantly seen in this sport that a very effective wrestler can often stifle the styles of Jiu Jitsu based fighters. The two clash in that ideology and it may make for a very interesting power struggle if the fight hits the mat.

A focal point on this fight should be geared towards the size difference between the two fighters which ironically both suit each fighter’s style so well. Lovato is shorter and will be more suited to get real low onto Avena to shoot or gain the leverage needed to get the fight to the ground. Avena will enjoy several inches of height on Lovato and creates a very tricky grappling problem as the long limbs of Avena make him dangerous the instant the fight hits the mat.

This size difference can also have a role to play in the stand up as a longer limbed and taller fighter can often use the limbs and space to stay out of danger while landing strikes. Both Lovato and Avena are both fighters who rarely see a decision. Lovato has been to one decision in nice fights and in fourteen fights Avena has seen each fight end via knockout or submission. On paper this fight shouldn’t see a fifteenth minute.

Stay tuned for more fight breakdown and fight coverage on SWFight.com and make sure to make plans to come support the locals on February 28th in Rio Rancho!