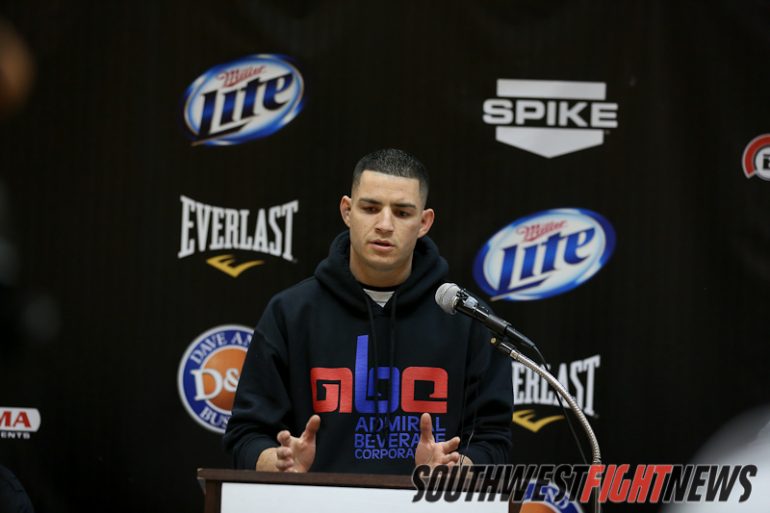 Bellator MMA is coming to New Mexico and it is all going down for the Bellator 91 event scheduled for February 28th inside the Santa Ana Star Center in Rio Rancho. With the announcement of prominent woman combat athlete Holly Holm participating in the event, the buzz has picked up dramatically and now coming into the spotlight are two reoccurring themes for the events under card.

The first is that there are several match ups that will feature prominent fighters from New Mexico gyms competing against one another. As was the case with Mean 1 MMA’s Kevin Croom facing off with Warrior Training Center’s Angelo Sanchez until an injury forced Sanchez out and replaced with Ran Weathers. Then it was the announcement of Jackson-Winklejohn’s Nick Gonzales pairing with Judgement MMA’s Adrian Cruz. The match ups are uncharacteristic of regional fighting as most local talent will not compete versus one another at this level of competition.

Originally scheduled around the same theme, Mean 1 MMA’s Felipe Chavez (5-3) was set to return to the cage after being away from fighting for over three years however, an injury has forced Chavez to pull out. The opening was quickly filled when it was announced Jackson-Winklejohn’s Andres “Bullet” Quintana (3-1) would step in to face an opponent who trains just down the way, representing Lovato Total Fitness, Russell Wilson (1-1), who will look to make a quick turn around as he last fought in December of 2012.

Quintana is a well disciplined fighter for his relatively young age. Very formidable in all areas of fighting, Quintana will provide a tough challenge for the young Wilson as “Bullet” is a very technical and clean, crisp striker who works to not make mistakes and find every opportunity to attack as possible. He has finished each of his career wins by way of knockout showcasing his impressive fight ending talents. In that same breathe, regardless of where the fight takes place, Quintana is dangerous and his technical prowess should be a concern for Wilson.

Joining teammates Lenny Lovato Jr. and Josh Lanier on the fight card, Wilson is still very young both in age and experience in mixed martial arts. His head coach from high school wrestling Lenny Lovato Sr. transitioned into his MMA coach and Wilson brings his wrestling pedigree into the cage. Working with teammates Lenny Jr. and Mikey Lovato, it will come as no surprise that Wilson will be completely prepared for the mature level of talent Quintana posseses.

Conditioning comes first nature to wrestlers as fighters with that background are accustomed to tough training camps and this fight has the recipe for a conclusion to come based off conditioning. While Quintana fights busy and explosive, Wilson could be favored the longer the bout goes on. Taking nothing away from Quintana but pointing out that he has only gone the distance once in his pro career and it was his lone career loss.

The youth movement will be strong in this match up as will the athleticism as both fighters bring so much to the table in terms of MMA talent. This one is a match that is so close to call that it has become a premier fight on the event fight card.

This is just one out of several exciting match ups featuring local fighters so make sure to come out to show support on February 28th for Bellator 91 and as always stay tuned to SWFight.com for more event coverage and fight breakdowns.