Bellator 91: Holm’s returns to MMA, matched up with Katie Merrill 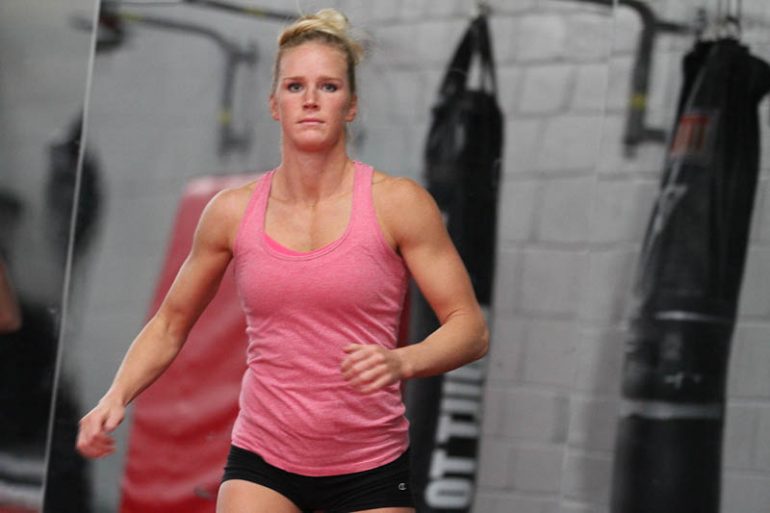 Something monumental is going down at Bellator 91 on February 28th, inside the Santa Ana Star Center in Rio Rancho, New Mexico. It could be the Light-Heavyweight Title fight featuring Christian M’Pumbu; it could be the stacked under card featuring several popular local New Mexico fighters. Possibly, a third option could be what is grabbing all the attention and buzz.

To the surprise of fight fans, Holm will not be defending her titles in early 2013 choosing in favor of returning to the cage for her third career professional MMA bout. Holm (2-0) has not seen cage time since late-2011. Albuquerque’s premier combat athlete, Holm’s has been focused on boxing and rightfully so as she is considered by many to be one of the greatest female boxers to ever compete.

Surprisingly, Holm started off as a kickboxer before the eventual move to boxing where her career has found its most success. When Holm made her mixed martial arts debut, many who were under the impress Holm was solely a traditional, technical boxer were quickly surprised when Holm would land kick after kick, eventually stopping Christina Domke by leg kicks in just over six minutes. The debut would be impressive, so much in fact that the hype surrounding Holm’s MMA venture brought her back for a second go round.

Holm would make her second appearance in the cage in September of 2011 facing off with veteran of woman’s MMA Jan Finney. Holm would score at will with punches and kicks, visually stunning Finney for the better of three rounds until a well timed kick to the body ended Finney’s night mid-way through the third and final round. The powerful kicks of Holm have become a lethal weapon not many expected to see out of the boxing phenom.

Freshly announced, Katie Merrill (1-0 pro, 2-0 amateur) will have the opportunity to upset Holm and end the hype surrounding her. The Massachusetts trained fighter represents Wai Kru MMA and is experienced in not only MMA but also in kickboxing and in traditional Muay Thai. Her striking experience may have her better prepared for the thunderous leg kicks of Holm but it doesn’t answer the question as to whether an MMA fighter can match the technical prowess of the boxing champ’s punches.

Merrill has won two of her three career victories by submission so her grappling abilities may be utilized in order to take away the excellent striking skills of her challenger. The ground game is still a huge question mark for Holm as she has yet to spend enough time on the mats in competition to fully know her capabilities and that is what will take Holm’s from a prospect to a real contender in Woman’s MMA.

The match up should be a stand up showcase, we will find out quickly how Merrill handles world class striking and if Holm’s has added any new facets to her already impressive fighting arsenal. There is plenty excitement based off of Holm’s name alone and the opportunity to see her compete in MMA could be less and less depending on the boxing scene for Holm, so every fight should be consider a “must-see” scenario for fight fans.

Stay tuned to SWFight.com for more event coverage and analysis and make sure to go out on February 28th to support our local athletes compete inside the Santa Ana Star Center.