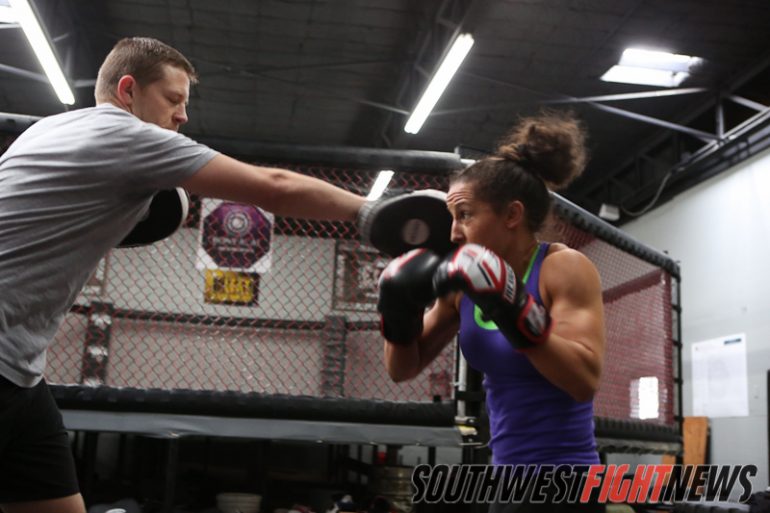 Ever since Diego Sanchez captured the attention of millions when he won the original Ultimate Fighter New Mexico has been a “Mecca” for mixed martial arts. The popularity continued with the emergence of Rashad Evans and Keith Jardine. Over the period of time, fighters like Brian Stann, Carlos Condit, Donald Cerrone and John Dodson have become polarizing figures in the combat sports world.

In 2012 we saw a huge popularity spike in what was a quiet portion of the sport. Women’s mixed martial arts (WMMA) had taken a huge hit to popularity with the decline of fan-favorite Gina Carano and division champion Cris “Cyborg” Santos. WMMA’s emergence would be revitalized through the efforts of the all female promotion Invicta Fight Championships and the crowning of Ronda Rousey as the UFC’s first ever women’s champion, the floodgate for Women’s MMA has opened. While the woman have been outstanding for years, the spotlight gained last year has allowed them to shine in full light and through that light, attention comes once again to New Mexico for the MMA talent.

Most combat sports enthusiasts are already familiar with the name Holly Holm, the 31-year old boxing queen who has in recent years dipped her feet into mixed martial arts. The WBA, IBA and WBF Champion has held titles in multiple weight classes in boxing and currently is undefeated in her two professional fights in MMA. While Holm is the face of female combat sports in the state and quite possibly the world, the talent pool is deep inside New Mexico.

The Jackson’s-Winklejohn’s gym not only houses World Champion Holm, but it also home to incredibly talented female athletes like “The Karate Hottie” Michelle Waterson (10-3) and “Fireball” Julie Kedzie (16-11). Both women are considered top fighters in their respective divisions and have competed in top promotions.

Waterson is coming off an exciting victory at the third Invicta FC event against a very game opponent in Lacey Schuckman. The win would propel Waterson back into the spotlight she had lost when taking a nearly two year layoff from the sport. The new Atomweight contender should have plenty of opportunities in 2013 to truly shine whether it is in Invicta FC or whatever promotion she ends up fighting for.

Kedzie is truly a “Fireball”, as she is never out of a fight and always brings the fight to her opponent. Since 2004 she has been true pioneer and real veteran in the sport. Kedzie was last seen in what could be considered one of the top candidates for “Fight of the Year” against fellow top fighter Meisha Tate in August. While she succumbed to a late fight stopping arm bar, Kedzie showed her striking and grappling brilliance and made a statement for possible rejuvenation in 2013. Undoubtedly, Kedzie is on a short list to join Rousey and opponent Liz Camouche in the UFC.

While Waterson and Kedzie are established names, the Jackson’s-Winklejohn’s gym also boasts a highly touted prospect in Jodie Esquibel (3-0). Riding hot on the heels of a successful 2012 that saw Esquibel dominate at the Jackson’s MMA Series 7 she would start her 2013 successful as well. This past weekend at the Invicta FC 4 show, Esquibel would take a step up in competition and battle Liz McCarthy to a split decision win. Esquibel now will be a fighter to watch out for and we should expect bigger opportunities to come her way in 2013.

The gym isn’t top heavy with talent, as teammates Emily Kagan, Norma Center and Heather Clark are hard working athletes as well. While the ladies don’t boast the popular names of the aforementioned fighters, they remain staples of the WMMA movement.

The talent pool isn’t isolated solely to the Jackson’s-Winklejohn’s gym however; very popular female fighter Angelica Chavez (4-2) represents the Chavez Dojo in Albuquerque’s SouthValley. Chavez fought in the inaugural MMA Fight Pit and for Invicta FC 2. She is also fresh off a signing a five-fight contract with the XFC. Chavez is a gifted striker as well as a slick grappler and she will be looking to turn around a losing streak in 2012.

One of the fastest rising women in the sport is coming out of another prominent New Mexico gym as FIT NHB’s Brenda Gonzales (4-0) made a name for herself this past year. Stepping outside the shadow of being UFC fighter Tim Means’ girlfriend, in 2012 Gonzales went 2-0 on her way to a King of the Cage title. After showing heart and big time cardio in her October title fight with Sarah Alpar that saw 25 minutes of action en route to a unanimous decision victory, Gonzales cemented her success with an impressive second round finish of Elsie Zwicker in December.

As the culture of mixed martial arts continues to be healthy in this state, women athletes will continue to emerge; only this time they will be able to gain the same spotlight their male counterparts have received.