UFC on FOX fight breakdown: Dodson vs. Johnson is a very even match up 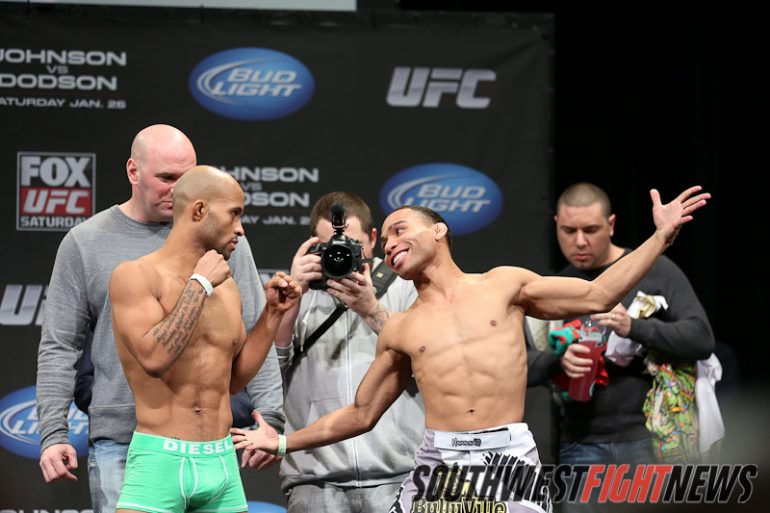 When the UFC announced the creation of the Flyweight 125-pound division, many fight fans wondered if the talent pool would pan out and if the fans would be positively receptive of the lighter weight fighters. This Saturday, UFC on Fox will feature the two top flyweights in the world on network television in New Mexico’s John Dodson (14-5) who will be fighting for the world title against champion Demetrious Johnson (16-2-1).

While the lighter weights are known for pushing a frenetic pace and maintaining excellent cardio to go 15-25 minutes, these two elite fighters have so much more to offer and SWFight.com will be digging deeper into the match up to offer some points of emphasis fight fans should watch for in Saturday night’s main event.

The champion, known by his catchy nickname “Mighty Mouse” is credited as being the quickest fighter in the world and few would dare to argue. His quickness makes his fine tuned striking and slippery grappling that much more dangerous. Dodson isn’t very far off from that skill set, while he is incredibly fast and agile; the strengths for Dodson is that he packs rare power for 125-pounds and is tremendously unorthodox both as a striker and grappler.

We’ll dig deep into two areas of the each man’s MMA game to really see how the two world class fighters pair up stylistically on paper in anticipation of Saturday evening’s title fight.

Each fan who watched Johnson dismantle top contender Joseph Benavidez by stopping his momentum and aggressive pace by slipping punches and cutting angles knows how gifted the champion is at working to his own strengths. Johnson has won six of his last eight, one loss coming to Bantamweight Champion Dominick Cruz and a draw with perennial contender Ian McCall. Included in that streak are victories over Kid Yamamoto, Damacio Page and Miguel Torres. In each bout, one main theme stuck out.

Johnson finds so much success in the striking game not only because of his speed; he utilizes exceptional usage of angling. The Matt Hume disciple cuts corners which creates both offense and defense. It allows him to strike his opponent from a less predictable angle which tends to catch the opponent off guard and lands flush. For what Johnson lacks in power, he makes up for in speed, accuracy and landing clean.

Defensively, Johnson uses angles to make it seemingly impossible to strike him. He is rarely standing still and hardly in the same place longer then a few seconds. It makes it extremely difficult for an opponent to find a rhythm or any sort of comfort in setting up combinations.

John Dodson is a rare breed that not only possesses speed but power and he has shown that in his two knockouts in his 3-fight UFC career. In short order, Dodson beat up Team Alpha Male’s T.J. Dillashaw and then finished former top ranked flyweight Jussier Da Silva in the second round. The finishes were indicative of Dodson’s tremendous power in a weight class not know for knockouts.

The ability to change the course of a fight is usually exemplified in the heavier weight classes, but as Dodson showed in a tough fight in the Ultimate Fighter house against Johnny Bedford, one punch from the power hands of Dodson can change the whole complexion of the fight and turn the tables.

What is tricky about the striking acumen of Dodson is that it isn’t completely power based. Actually, he is extremely technical and as a Mike Winklejohn student tends to do; Dodson likes to throw kicks and attack the body in an array of crisp combinations. It just so happens that he has power when they land. Dodson showed a brilliant set up to the finishing punch of Jussier Da Silva by attacking the body which opened up the powerful head strikes that ended up spelling disaster for the Brazilian fighter.

If the striking game wasn’t razor close enough for fight fans, the grappling will be. The two are very outstanding grapplers who utilize a different style to compliment their overall skill set. If the fight ends up being dictated by the grappling aspect of MMA, it would be completely a toss up on how it ends up.

Dodson is a former High School wrestling champ who rarely shows his offensive wrestling. Instead, the explosive striker uses his wrestling in reverse as he has excellent balance, a solid base and a very effective sprawl. He is very hard to take down and when an opponent does get a takedown it is even harder to keep Dodson grounded, usually a quick scramble will ensue and within seconds Dodson is once again already bouncing back on his feet.

Johnson is the contrast, utilizing wrestling offensively to really get opponents off balance and leaving them uncomfortable with the idea they cannot predict what is coming next out of Johnson. A quick snatch of a single leg or a powerful, explosive double has left several opponents working off their backs against the very slippery and hard to control Johnson.

Should the fight hit the ground; an incredibly explosive defensive grappler will be paired with an explosive offensive grappler. Similar to the striking match up where the heavy handed Dodson may look to counter, seeking the knockout while Johnson picks his spots and angles out to create space to land his quick combinations.

New Mexico fight fans should tune in to FOX on Saturday evening and if you aren’t able too, stay tuned to SWFight.com for results and post fight analysis. As always support the local fighters on the card which includes Donald Cerrone, Clay Guida, Shawn Jordan and John Dodson.