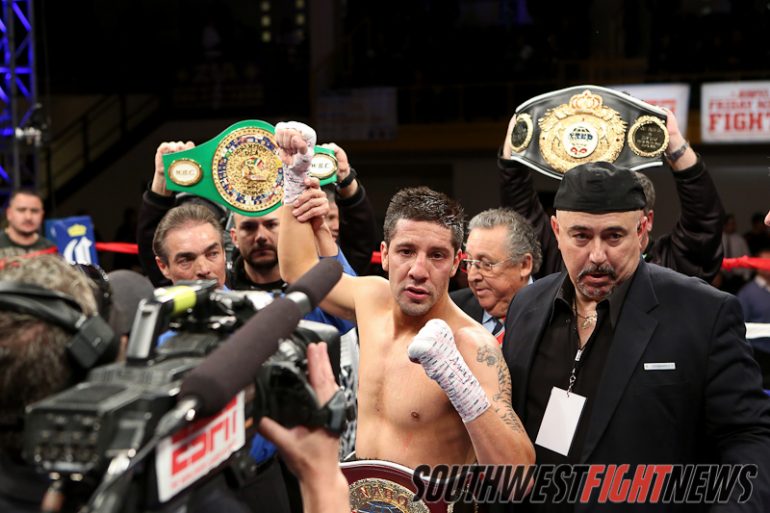 Early on a gun shy John Molina Jr. was being outboxed by Dannie Williams in the main event of ESPN Friday Night Fights at the Pueblo Pavilion in Santa Fe, New Mexico. After being knocked out in just 46 seconds in the first title fight of his career in his last outing Molina, was extremely hesitant the first three rounds against Williams.

This was the first fight Molina has taken since pairing with new trainer Robert Garcia. “I gotta follow his strict commands and it was to feel him out.” said the Covina, California native Molina of his demur.

It was in the fourth round with a swift over the top righthand that Molina was able to put his name back in the title contention hunt. The punch near the ropes dropped Williams who was so disoriented that he did not realize that as he stood to answer referees Rocky Burkes ring count that he was on the opposite side of them.

“He was leaning more to his right side every time I jabbed him,” said Molina. “Robert told me ‘double up and finish with the right hand’ so we did and it capitalized.”

In the co-main event of the evening, Sacramento’s top prospect Brandon Gonzales lured Don Mouton into an inside battle for much of the fight. Gonzales would occasionally take advantage of his height and arm length advantage and fight beautifully from the outside.

The Californian worked the body for the majority of the eight round fight but was urged by his trainer Virgil Hunter in the final round to elevate his punches to Mouton’s head.

A competitive Mouton did not throw enough to threaten a victory but did land some huge hooks on Gonzales whenever the prospect would close the distance.

“I could have dominated a little more from the outside,” said Gonzales. “We made the adjustments during the fight and made the fight a little harder than it had to be.”

In the first televised bout of the evening, Brandon Holmes demonstrated good poise and defensive skill as he stopped Abelardo Esperza by stopping him in the fourth round. In a battle of two debutants it was Holmes that displayed the better technical skill. Esparza had his moments with huge hooks that at time got him in trouble allowing Holmes to attack right up the middle.

[youtube id= “YZfbNVvFDTk” width=”600″ height=”350″]
Demonstrating new found conditioning and footwork Albuquerque’s Archie Ray Marquez received a test from a tough Rynell Griffin. The two men traded blows which drew appreciation from the fans that remained after the televised portion of the ESPN card. Ultimately, it would be Marquez’s slick movement and punching from angles that would give him the nod from all three judges.