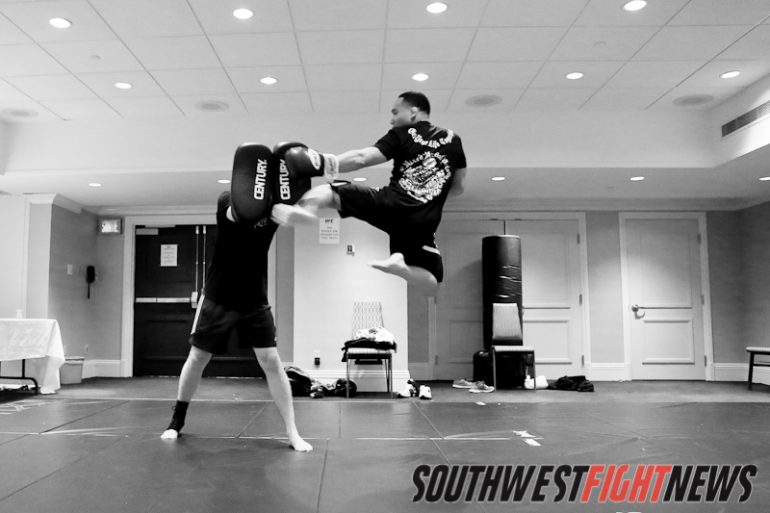 John Dodson Says to Bet on Him Against Demetrious Johnson

In his freshman year at Moriarity High School, John Dodson (14-5) decided to tryout for the wrestling team. He had no prior experience in the sport but as an elite athlete he took on all challenges.

“No one expected me to do anything,” says Dodson. “No one thought I would win a state title in my first year.”

He would go on to win his semi-final match in the 105-lb New Mexico State Wrestling Championship weight class but would not participate in the championship match. After his victory in the penultimate contest Dodson, pinned his opponent but in the process suffered an asthma attack and passed out.

Officials would not let Dodson continue on to the final. Despite losing, his opponent would be awarded his slot in the championship match and become the eventual state champion at the weight.

“I took that as motivation,” says the 2003 Moriarity graduate, who would go on to win two state state titles and four district championships in the next three years of his high school career.

After his senior year Dodson was recruited by MMA coaches Greg Jackson and Chris Luttrell to join the Jackson’s Gym. At 19  Dodson would start an MMA career that that seven years later would land him on the UFC’s – The Ultimate Fighter 14 series. There he would defy the odds once more making the finals and defeating T.J. Dillashaw to become the season’s bantamweight winner.

Fast forward nearly 14 months and you will see that the 5’3” dark horse Dodson continues to raise eyebrows and continue to defy the odds. Despite being a nearly 2 to 1 underdog against UFC Flyweight title holder Demetrious Johnson (16-2-1) for this Saturday’s championship contest on UFC on FOX 6, Dodson feels no pressure and is confident in being victorious.

“I like being the underdog because people will make more money off me,” he says jokingly. “Betting world… bet on me.”

The flyweight title the two men will be combating for was just introduced last fall. Johnson became the first champion by defeating former Las Cruces High School graduate Joseph Benavidez at UFC 152 this past September.

Surprisingly, this newly established strap is not the leading motivator in driving Dodson to defeat Johnson.

Most people may see this as arrogance from Dodson, especially when one considers some of his actions post-fight inside the cage. He is no stranger to displaying his happy-go-lucky personality by doing backflips and summersaults after a victory all while showcasing his million-dollar smile. There are many aficionados that take those actions as cockiness.

“People have done nothing but hate; talking about how I act so immature when I’m winning,” says Dodson. “They don’t understand the fact that I’m in there and it’s me living out my dream. I’m so excited to be doing what I’m doing that I can’t see myself doing anything else.”

Dodson looks to reach the pinnacle of his dream Saturday night by joining fellow Jackson’s/Winkeljohn’s MMA teammate Carlos Condit, as the only two native New Mexican fighters to win a UFC crown.