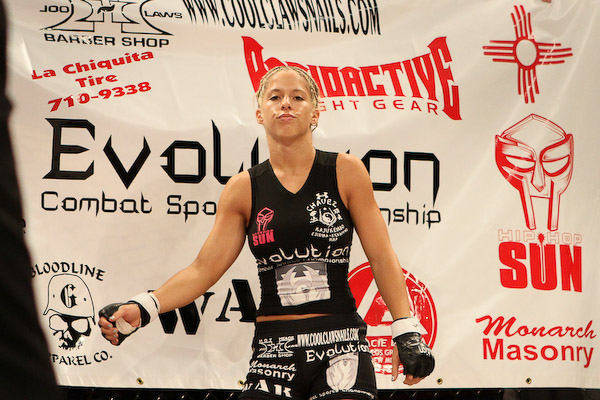 Earlier today it was announced by the XFC (Xtreme Fighting Championships) that they have signed Albuquerque’s Angelica Chavez to a multi-fight deal in their atomweight division.

Chavez holds an MMA record of 4-2 and fights out of the Chavez Dojo in Albuquerque’s South Valley, a gym that is operated by her father, Grandmaster Melcor Chavez. She specializes in Kajukembo and is trained in Brazilian Jiu-Jitsu by IBJFF World Jiu-Jitsu Championship bronze medalist Rafael ‘Barata’ Freitas.

Primarily based on the east coast the XFC has drawn large crowds to their events. In their 2007 card at the St. Pete Times Forum they drew a crowd of over 11,000 fans. Since 2010 they have been one of the forefront promotions in Women’s MMA, showcasing fighters like Marianna Kheyfets, Felice Herrig, Carla Esparza, Kim Couture, and Heather Clark.

This will be the seventh promotion that Chavez will be fighting in as a professional. Her ‘SWFight.com Fight of the Year’ nominee bout against Nicdali Rivera-Calanoc last July helped fuel a strong 2012 for women’s MMA.