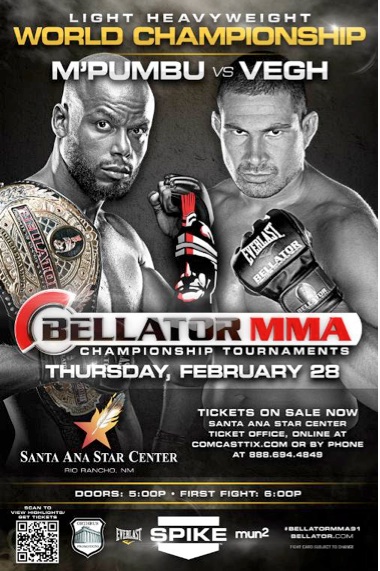 It is official, Bellator MMA will be hitting the Santa Ana Star Center in Rio Rancho, New Mexico, February 28th. Earlier today the promotion announced that Bellator Light Heavyweight World Champion Christian M’Pumbu will put his title on the line against Attila Vegh in the main event at Belltor XCI (91) that evening.

Tickets for the event go on  sale January 11th and range from $25-$90. Tickets can be purchased at ComcastTix.com, Bellator.com or by visiting The Santa Ana Star Center box office. The event will broadcast LIVE starting at 8 p.m. MST on Spike, as well as in Spanish language on mun2. The preliminary card will be streamed LIVE and FREE on Spike.com starting at 6 p.m. MST.

Local fighters are also expected to make up most of the undercard. As the bill materializes we will be sure to keep you updated with any additional fights added to this highly anticipated card.