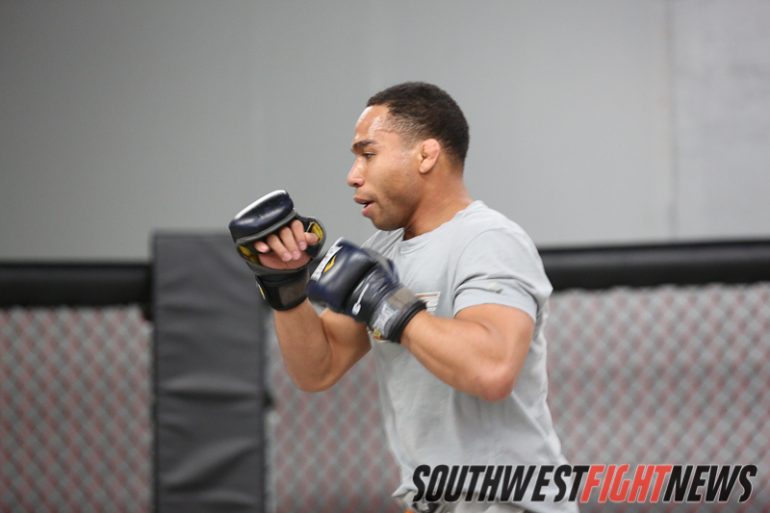 2012 was a good year for New Mexico based combat sports fighters. From the popular boxers Holly Holm and now current champion Austin Trout, to the polarizing mixed martial arts champions Jon Jones and Carlos Condit, our state was blessed with loads of success and popularity through the hard work and dedication of our local athletes.

Fight fans should expect even more success from the roster of New Mexico athletes in 2013 as the fighters here continue to put in the hard work necessary to make the leap from prospects to contenders and from contenders to champions. SWFight.com is highlighting five fighters and fights to pay attention too in early 2013, as the UFC has several New Mexico based fighters lined up for big opportunities.

This past November, Carlos Condit joined Joseph Benavidez as New Mexico fighters who have had the opportunity to compete for UFC gold. While both fighters failed to win their title bouts, they fought valiantly. The newest fighter to get the opportunity will be John Dodson (14-5), who he takes on inaugural flyweight champion Demetrious Johnson (16-2-1) on UFC on FOX 6.

The bout puts the popular Jackson’s-Winklejohn’s gym once again in the spotlight with Dodson, one of the most well known and longest active members of the gym. His popularity gained from the Ultimate Fighter show has helped propel his career very quickly to the sports brightest stage.

Johnson is coming off wins against Ian McCall and Joe Benavidez, who are the two best flyweights outside of Dodson in the world. Using his insane speed and angling, Johnson has become the divisions first real kingpin and Dodson may be the only remaining flyweight capable of dealing with the speed of “Mighty Mouse”. Dodson himself, is coming off a stoppage victory over former top flyweight Jussier Da Silva and also three wins in a row for the UFC.

New Mexico will have another chance to crown a UFC Champion and the odds are favorable as Dodson is currently a slight underdog to upset the current champion.

This scheduled fight was a match up that WEC fans salivated for all the way to the end of the promotions run. Anthony “Showtime” Pettis (15-2) is finally scheduled to face fellow striker Donald Cerrone (19-4) in what could be the number one contender fight for champion Ben Henderson’s title. Jackson’s-Winklejohn’s’ Donald Cerrone was already near a title fight when he faced Nate Diaz and while he lost the fight, he bounced back with two convincing wins since including the epic knockout over former teammate Melvin Guillard.

Cerrone has remained one of the more popular fighters in New Mexico, known very well for his trash talking and outside of the octagon antics. “Cowboy” will get his chance for redemption as he lost twice to the current Champ Henderson, in the WEC.

In a division that is in desperate need of a title contender, Cub Swanson (18-5) is ready to break out and emerge as that contender in his Featherweight weight class. Opposing him is former top contender Dustin Poirier (13-2). The two top fighters will look to put on a show and each athlete is poised and ready to get into that title spotlight and an opportunity to face division champ Jose Aldo. Poirier just recently fought in what many voted as “Fight of the Year” in all of MMA last year when he went toe to toe with “The Korean Zombia” Chan Sung Jung.

The Jackson-Winklejohn fighter Swanson had a perfect 2012 in a year that saw three impressive wins via knockout over George Roop, Charles Oliveira and Ross Pearson. With fight ending power in his hands, the 145-pound Swanson is at the top of the heap and a win over Siver may very well make him the next challenge for the winner of the upcoming Aldo and Frankie Edgar title fight.

Swanson was originally scheduled to fight Dennis Siver, but then was pulled off the card when he succumbed to injury. Poirier was pegged the late replacement and would completely change the perplexity of the match up. Siver was a kickboxer with loads of kicks in the arsenal and some good submission, Poirier is a heavy handed punch oriented striker with a powerful top grappling game.

The Greg Jackson disciple and Albuquerque native Diego Sanchez (23-5) will be looking to rebound from a heart breaking loss to Welterweight juggernaut Jake Ellenberger and he will do so by once again dropping down to the Lightweight division. One year nearly to the day from his hard fought battle with Martin Kampmann, Sanchez will take on the powerful punches of top Japanese star Takanori Gomi (34-8).

Sanchez has the opportunity to revive his career with the drop to 155-pounds, his return to welterweight was average as he went 2-2 and now in a bout with the former top lightweight, the “Dream” has his opportunity to recapture the success and popularity that made him into one of the sports first stars.

This past November, Albuquerque’s Carlos Condit came up short against division champ Georges St. Pierre. The loss was heartbreaking and many fans and members of the media started analyzing the next move in the “Natural Born Killers” career trajectory. Fortunately for the MMA world the answer was given not too soon after as former foe Rory MacDonald called out the former interim champ after his win over BJ Penn.Back in 2010, Condit handed MacDonald his first career loss in a very close and exciting fight that saw Condit steal the win with a late TKO in the third round after MacDonald arguably won the first two rounds. After beating Penn, MacDonald would publicly call out Condit seeking a rematch and some vengeance for the 2010 loss.

The UFC would be more then happy to oblige the public call-out as the bout is rumored to be part of the UFC 158 card that features a Welterweight extravaganza as the evening is rumored to host the Welterweight title fight between Georges St. Pierre and Nick Diaz as well as a top contender bout between Jake Ellenberger and Johnny Hendricks.