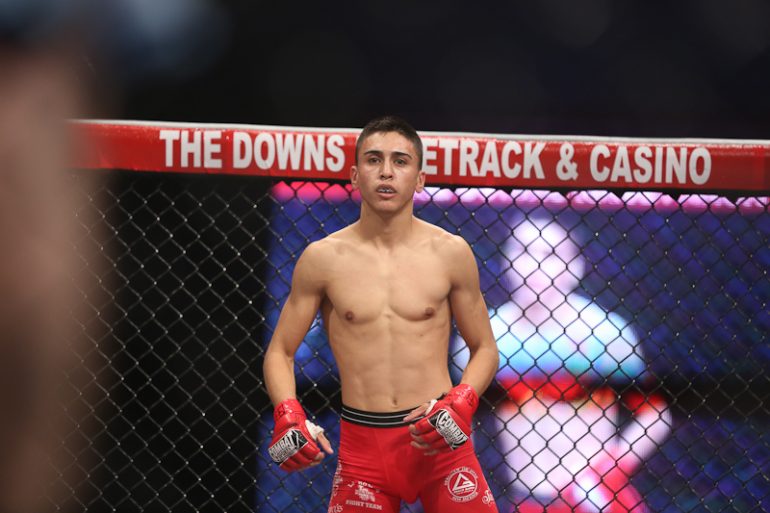 ALBUQUERQUE, N.M.—Jackson’s Mixed Martial Arts Amateur Ricky Esquibel, moved to 3-0 with a victory at the past Saturday’s Jackson’s Mixed Martial Arts Series X. Esquibel grinded out a hard-fought split decision win over  a very tough Nick De Fiore (29-28, 29-28 and 28-29).  Esquibel spent only 24 seconds in the cage in his last fight at Jackson’s MMA Series 9 where he caught Chris Brewer with a guillotine choke. Heavy-handed De Fiore set the tone early and right away Esquibel knew he was in for a war.

“That was the most I’ve ever been hit in a fight,” said Esquibel.  “In the first round he hit me with a hook that woke me up. I had never been hit that hard in a fight before. He was a lot more experienced and a lot stronger.”

Coming in to last Saturday’s fight, De Fiore had five more fights than Esquibel and a size and strength advantage. But something that a training partner told Esquibel kept lingering in the back of his mind.

“Bubba McDaniels told me ‘stand your ground and come out swinging,’” said Esquibel. “I’ve working a lot on cutting out my angles. It really helped me in this fight.”

Along with McDaniels, Esquibel trains at one of the best camps in the nation at Jackson’s MMA. Led by world-famous trainers Greg Jackson and Mike Winklejohn, on any given day the likes of UFC Light Heavyweight Champion Jon “Bones” Jones, UFC no.1 Flyweight Contender John Dodson, former UFC Welterweight Champion Carlos Condit as well as many others could be on the mats training and helping young fighters like Esquibel.

Esquibel has formed a strong relationship with Dodson, who will fight for the UFC Flyweight World Title on Jan. 26 at UFC on Fox 6, and says he tries to mold his career after his mentor’s.

“John Dodson is the guy I try to emulate, “said Esquibel. “He helps me out tremendously. I’m still young in this sport and he has already taught me a lot. It helps out a lot to see what it’s like to spar with the caliber of guys I get to, like John.”

Esquibel starting training full-time at Jackson’s about a year ago after winning the Jackson’s – Edge Fight Championship and has been training with Dodson for four years.

Not only does Esquibel have Jackson’s MMA for support in the gym, but he also has a great support system away from the cage. His two biggest fans are his sisters Mary and Jessica.

“My whole family is my biggest support system,” he said. “My sisters have supported me the most through everything I’ve been through in this sport. They are both always trying to push me to be my best and keep me on track. I’ll want to take a day off and they will both tell me to get in the gym. They also keep my in check with school. They always try to push me to maintain my focus.”
Along with be a full-time fighter Esquibel is also enrolled full-time at the University of New Mexico. He is on track to graduate with a degree in Nutrition and Dietetics. He admits it’s a little tough to maintain focus while being a fighter and a student. Esquibel took a fight on the week before his semester finals at UNM. While this is not easy, Esquibel looks to have found the right mix to get the job done.“It’s a challenge to go to school and train for a fight,” he said. “The week when I was cutting weight was really tough and it was mentally exhausting. I would try to study to just to keep my mind off the hunger. I’ve just been really good about my time management. I go to class, then to practice, then back to class and then back to practice.”

Esquibel has a bright future in this sport and will continue to thrive with the support his has around him.

“I wanna thank my team over at Jackson’s, my corner John Dodson, Greg Jackson & Reece Killebrew, Professor Barata and Gracie Barra New Mexic0, Dextrus Fight Wear, my sisters Mary and Jessica and my whole family for all their support.