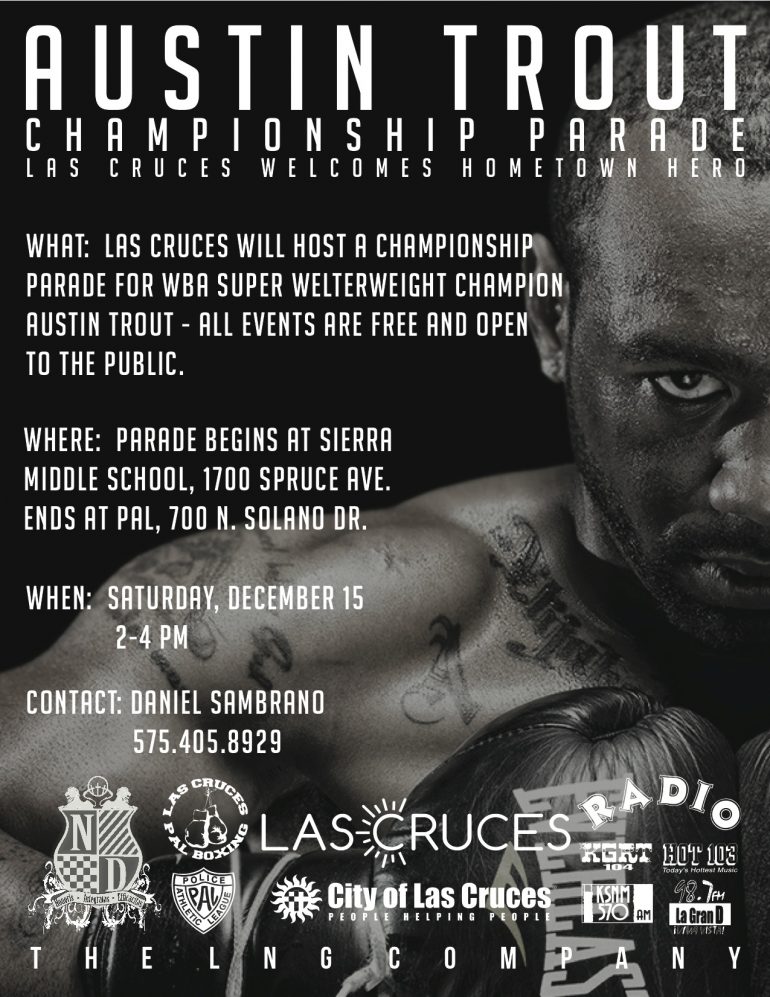 The parade will begin at Sierra Middle School, 1700 Spruce Avenue, head south on Walnut Drive, turn west onto Hadley Avenue and end at the Las Cruces Police Athletic League, 700 N. Solano, where Trout began his boxing career at the age of 10.

That career took a monumental turn Saturday, Dec. 1, when Trout defeated Cotto in a unanimous decision at Madison Square Garden in New York City. Trout was the underdog – the champion even came out before Cotto – but in the end, he was just a better boxer. Two judges scored the 12-round match at 117-111 and the third at 119-109.

Trout delivered quite the upset, giving Cotto his first loss in New York City as part of a fight card promoted by Cotto’s home country of Puerto Rico. More than 1.4 million viewers tuned into the fight on Showtime, making the event the highest-rated fight in the network’s history.

“Walking into Madison Square Garden was something that I can’t describe,” said Louie Burke, Trout’s trainer. “It’s the biggest mecca in the sports world, and it’s been just a marvelous journey.” He also added, “Austin is a true professional, and I’ve never seen him quit. Ever.”

Organizers of the parade are working with the City of Las Cruces and Convention & Visitors Bureau and other community members to put on an event that honors Trout and gives him the welcome he deserves.

“I think it’s about time that Austin gets recognized,” Burke said. “I’ve seen him mature into a man, and now he’s become a superstar, but he’s remained humble and he recognizes his community and where he’s from.” The public is invited to participate in the parade to honor Trout in their own ways. Entries will be accepted through 6 p.m. Thursday, Dec. 13.

As the parade comes to an end at PAL, Trout and his camp – including Burke, strength and conditioning coach Shukree Shabazz, camp coordinator Moose Gomez and fiancée Taylor Hardardt – will be on hand at the gym to visit with Las Crucens about the amazing journey.

Saturday will be an entire day of celebration for Trout in Las Cruces, as the professional boxer assists with the Las Cruces Bike Giveaway from 9 a.m. to 1 p.m. at Sisbarro Dealerships, 275 W. Boutz Road. The event is open to the public.

“Epilogue,” the second of two episodes of “ALL ACCESS: Cotto vs. Trout” also premieres at 10 p.m. ET/PT Saturday on Showtime.

Parade organizers are currently seeking participants who would like to enter ﬂoats with the theme of
congratulating Trout on his monumental win over Cotto. The parade will begin at Sierra Middle
School, 1700 Spruce Ave., continue south on Walnut, west onto Hadley Avenue and end at the Police
Athletic League, 700 N. Solano Drive.

The deadline to enter a ﬂoat in the parade is 6 p.m. Thursday, Dec. 13. For more information, contact

[…] For more information on the parade for “Austin ‘No Doubt’ Trout Day” please click here. […]