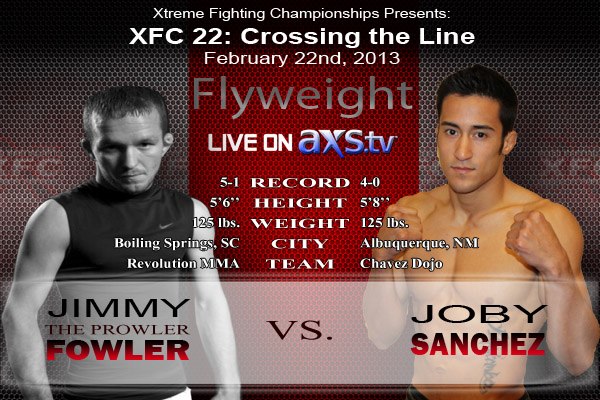 The bout will be taking place at flyweight, a weight-class that Sanchez has never fought at as a professional.

“The last guy I fought was pretty huge,” says Sanchez of his recent bout against Christopher Dunn on XFC 20 this past September. “Moving down to 125 has always been a consideration ever since these national promotions have opened up the flyweight division.”

In Folwer, Sanchez will be facing an opponent who in five victories has won by either rear-naked choke or armbar.

“He has great jiu-jitsu,” says Sanchez. “It’ll be a tough debut at a new weight.”

Sanchez admits that the drop in weight will have a large affect on his daily diet. To prepare for the weight cut he is taking advice from Jackson’s MMA amateur flyweight Ricky Esquibel (2-0).

“You see guys like Travis Marx, who looks huge at 135 pounds,” says Sanchez of the Bellator and fellow Albuquerque based Jackson’s-Winkeljohn’s fighter.”I’m hoping they say , ‘Man that’s a huge 125-pounder’ about me but that might not go too well with the ladies.”