Holm Outpoints Prazak While Valdez KOs Montes in a Classic 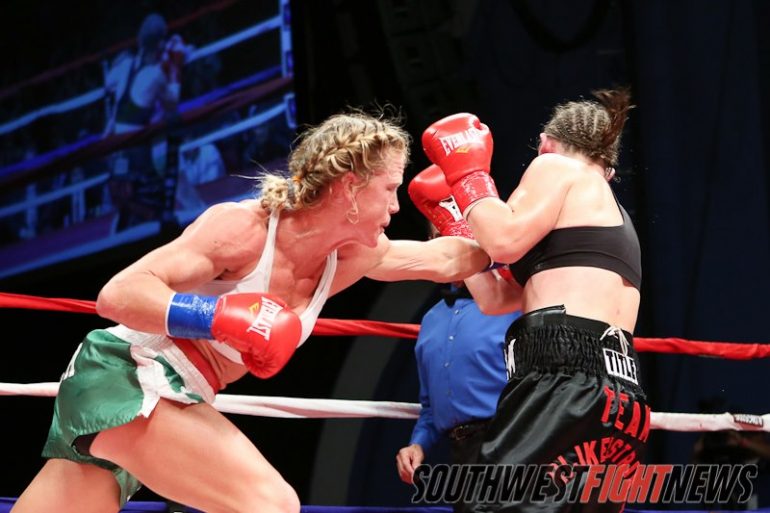 With a big height and arm length advantage Holm was able to outbox Prazak from the outside, confusing Prazak by changing lead punches every time she threw.

Early on, Prazak who was making her first trip to the junior welterweight division, appeared to become frustrated with Holm’s lateral movement around the ring.

“We’re in a ring, let’s box!” Prazak exclaimed during the match.

Her only opportunities came when Holm would decide to fight inside, catching the hometown fighter with huge over the top punches. The hits were big enough to momentarily stun Holm but did not cause any real damage.

Prazak would later rely to an all out turtleshell defense to sucker in Holm, at times backfiring due to the excellent body work by Holm.

By the time the decision was announced it was a forgone conclusion that Holm had won every single round. The judges would agree awarding a 100-90 clean sweep.

“I’d rather go in and fight the best and lose than fight bums and win,” Prazak would later say.

In the post-fight interview with the ring announcer Holm thanked her fans as she usually does and talked about her respect for Prazak. The audience and even Holm were taken off guard by what would follow as the ring announcer would address their attention to the video screens above the ring.

Appearing overhead was a Cecilia Braekhus’ video which she released on her website late this week. In the soon to go viral clip Braekhus the WBA, WBO and WBC welterweight champion of the world challenges Holm to a July fight in Las Vegas, Nevada.

A humble Holm would not respond directly to the message instead saying she would decide what is next for her after the Christmas holiday. She would however discuss a possible match up with Braekhus in a post-fight interview with SWFight.com and in the post-fight press conference.

“I guess it’s an honor that she’s calling me out,” Holm said. “I would never make video of myself to send to someone. That’s not my style”

In a highly anticipated rematch of their fight of the year candidate contest in September Tony Valdez and Raymond Montes did not disappoint in their main event.

The two men did not touch gloves to commence the match. Montes took control early on with flush shots. Valdez made a good comeback by forcing Montes to exchange and came up with the cleaner shots.

In the second and third rounds it was Montes’ jab that allowed him to keep Valdez at bay and was able to follow the punches with power shots. With the jab, Montes was able to cause a cut over Valez’ left eye. Late in the round Valdez was able to stagger Montes who defended himself by unloading some huge power shots.

It was in the following three rounds, as Montes became wary that a fresher Valdez began to emerge. Montes used Valdez’ bleeding eye as a target, fighting a lot more technical than his counterpart.

There was a brief moment during that fourth where Valdez landed a five-punch combination in the opposing corner to which Montes appeared to be temporarily out but after catching another two punches came to.

Valdez would continue to out land Montes in power shots in the fifth. Both men would take turns fighting with their back to the ropes; both landing significant punches.

In what would be the penultimate Valdez seriously rocked Montes with a 1-2 combination but decided not to pursue. He would make up for his reluctancy later when he caught Montes with a huge left hook and followed up with a flurry.

The inability to breath due to a bleeding nose was a factor to start the seventh round for Montes. A lunging left hook from Valdez would seriously hurt Montes who in turn tried to hold.

An off balanced equilibrium had Montes stumbling across the ring trying to stay avoid danger. Valdez saw this as an opportunity to end the contest distributing lethal blows sending Montes falling into the ropes forcing Montes’ trainer Manny Anaya to throw in the towel at the same time referee Richard Espinoza jumped in to stop the contest.

While the Valdez’ corner celebrated by cheering with their fans and yelling unpleasantries toward Montes’ corner, paramedics immediately tended to Montes who was lying on the canvass eyes wide open but not showing much movement.

He was quickly put on a stretcher and taken to a hospital where he was diagnosed with bleeding of the brain.

At the time of the knockout SWFight.com had the fight scored 58-57 for Valdez.