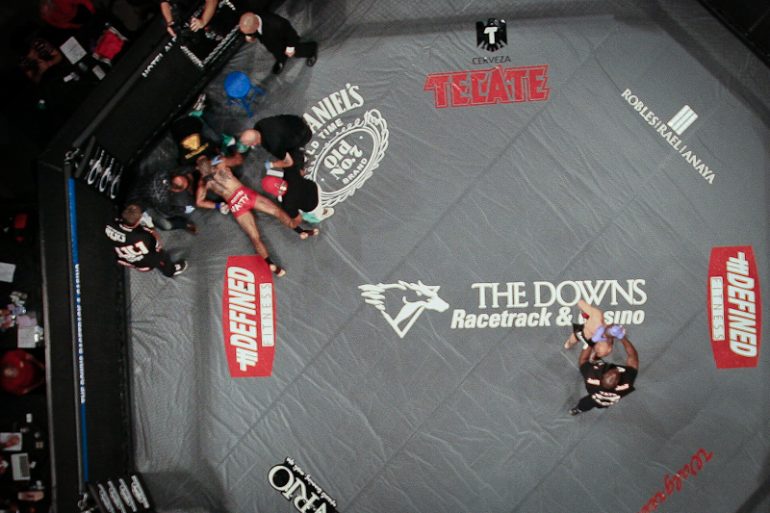 The Jackson’s MMA Series X event is going down tonight, December 1st inside the Tingley Coliseum in Albuquerque, New Mexico. SWFight.com has kept you up to date with fight coverage and match up breakdowns all week and all the festivities will cap off a fun year for New Mexico regional MMA action for the 2012 year.

For fight fans not familiar with the popular MMA promotion or the local fighters competing and want to add some intrigue to your evening’s plans, we have included five items to pay attention to while attending the fight.

The brother of current number one contender in the UFC’s Flyweight division John “the Magician” Dodson, Eric Dodson returns to the Jackson’s MMA Series after a climatic, slobber knocker of a fight in September against Fernie Garcia. Dodson exchanged several times with Garcia, throwing hard punches and eating clean shots before a fight ending counter punch sent Garcia to the mat and Dodson celebrating into brother John’s arms.

After such an exciting moment, it is hard to imagine Dodson can duplicate the jaw dropping performance he saw in his fighting career debut but fight fans should be at the end of their seat watching what could end up being just another exciting chapter in what looks like a bright career of Eric Dodson.

How successful will the representatives from the Jackson-Winklejohn gym be?

The event is scheduled for nine bouts and each one has a representative from the local, famed gym. While many may point out that each fighter can be argued as the betting favorite heading into the bout, the fighters coming in to face the home gym fighters know what there up against and know with a win, they put themselves in a great position to progress in their careers. We have seen in the past fighters like Aaron Cerda and Freddie Lux have made statement victories under the promotion’s bright lights.

As far as the analytical eye can see, the under card is where the upsets may be occurring as the lower experience levels and more aggressive styles can play a role in the fights. Ricky Esquibel was matched up with someone with more experience and Michael Asmar is evenly on par with his opponent. Those may be the evenings toss ups and the other is Mike Justus who is coming off of a long layoff.

Will a flyweight prospect emerge as a prospect to be UFC bound?

Edit: This fight was cancelled due to David Ruelez missing weight.
Nick Urso will certainly be under a bright light being scouted out as the next possible fighter to find a home in the UFC’s octagon every fight in his career going forward. The Jackson’s MMA Series is a very popular event that is covered by several top MMA websites and the fact he represents one of the world’s most notable gyms doesn’t hurt either. While he is still young in his career with five pro fights, the UFC’s 125-pound division has but a dozen fighters and the weight class is still being developed.

Urso has a very good skill set tailor made to succeed in MMA as his striking continues to improve and it compliments his wrestling and grappling acumen. If Urso succeeds with another dominant victory against opponent Dave Ruelez, we will all be eagerly awaiting Urso’s climb up the proverbial ladder to the big show.

How will the turn out be in Tingley’s second showing of the series?

The Jackson’s MMA Series had nested for a good while in the Hard Rock Casino until the last event was moved to Albuquerque’s popular venue Tingley Coliseum. The venue is a solid one to watch fights as even people in the stands have the angle to look down into the cage without the people in front of them blocking the view.

In the last outing the arena was very loud but the stands had plenty of room to accommodate more fight fans. After the success and excitement of this latest event, it will be interesting to see if more people will join the festivities for the year’s last show. Filling up Tingley won’t be easy but if more people attend the atmosphere for the event could be greatly epic.

Will the main event turn into fireworks, capping of 2012 with a boom?

The fight between Matt Leyva and Anthony Birchak on paper looks to be complete dynamite. The records are similar, the career trajectories on course with one another and they come from great gyms, Leyva from the Jackson-Winklejohn camp and Birchak from the tough APEX MMA gym in Arizona.

While their styles contrast, the two are so talented that this fight could be competitive anywhere the fight goes. Whether it is in the clinch, from striking range or on the ground the two top notch bantamweights have all the talent and skills required to make this fight into a great main event fight. As a fight fan, knowing that Leyva has a solid top grappling game and Birchak has finished several fights from his back means the ground game could end up being more exciting then the striking aspect.

SWFight.com will be live in Tingley Coliseum and hope to see all of you there to catch the tenth installment of the Jackson’s MMA Series. Stay tuned for post fight recaps and analysis.

Cotto and Trout Weigh-In on the Scales in New York