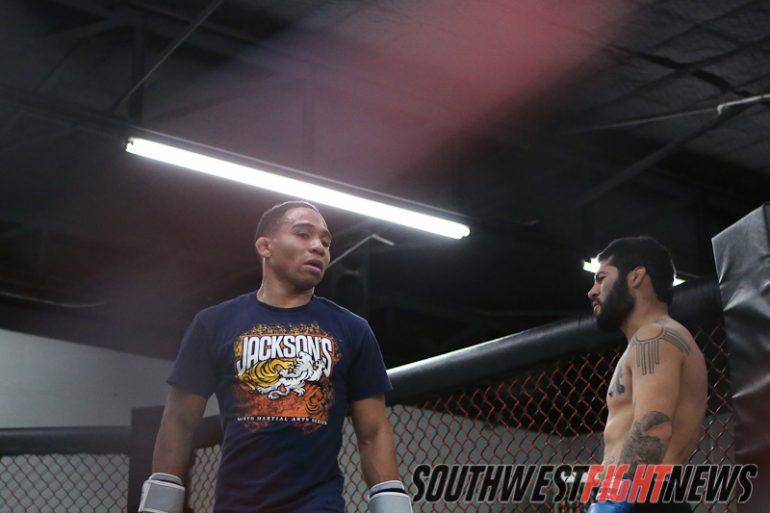 January 26 will see one of the best MMA events yet to hit network television as the UFC on FOX 6 scheduled card is stacked from top to bottom. Being held inside the United Center in Chicago, Illinois the UFC will showcase a flyweight title bout as well as featuring several top name fighters on the under card.

The event is also very intriguing for fight fans of New Mexico as the Jackson’s-Winklejohn’s gym in Albuquerque, will have five fighters participating in the event. Impressively, the Albuquerque gym will have a fighter in nearly half of the evening’s scheduled bouts.

Starting off the event is Buddy Roberts (12-3), who will step up on short notice to fight Michael Kuiper (12-1) in a middleweight bout. Roberts is coming off a loss to Yushin Okami this past August, after posting an impressive six fight win streak. Roberts will look to bring his powerful style into the cage and start his new year off with a victory to get himself back into the mix in the 185-pound division.

Heavyweight Shawn Jordan (13-4) will also be seeking redemption in his first fight of 2013 as he faces off with Mike Russow (15-2). Jordan is best remembered for flattening Oli Thompson last March and is coming off a decision loss to perennial contender Cheick Kongo. Jordan remains one of the tougher match ups in the division and will look to prove that against a very tough Russow.

The always entertaining Clay Guida (29-13) will return to the octagon, but this time will drop down to featherweight looking to make a splash in the 145-pound division. His debut will not be easy, as he draws Japanese main stay Hatsu Hioki (26-5-2). The grinding, exciting style of Guida should be interestingly countered by the technical grappling prowess of Hioki and as always, a Guida fight should be an early favorite to win “Fight of the Night” honors.

In what could end up “one-upping” the Guida bout, Donald Cerrone (19-4) will match up with Duke Roufus prodigy Anthony “Showtime” Pettis (15-2) in a lightweight fight that has been one of the more talked about and anticipated match ups in 2012. The two prolific strikers should make for either an epic knockout or an epic war, either way the fans are the winners in this one and as for the actual winner of the bout, they should be first in line for a lightweight title fight in 2013.

While joining four teammates to fight on the card, John “The Magician” Dodson (14-5) has the most on the line January 26th. Dodson has long been overlooked before the UFC finally added the 125-division, winning the Ultimate Fighter at 135-pounds and will now have his opportunity to shine when he meets Demetrious Johnson (16-2-1) in “Mighty Mouse’s” first title defense. Dodson’s speed, rare flyweight power and creative stand up ability makes for an intriguing style match up to counter Johnson’s speed, angles and grueling pace.

Stay tuned for SWFight.com for in-depth fight coverage and breakdowns and make sure to watch out for special coverage as members of the SWFight.com staff will be live in Chicago for the special event.