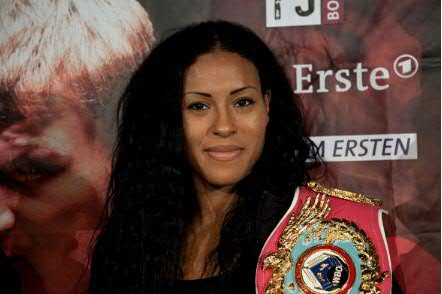 A day before Holly Holm takes on Diana Prazak for a pair of Junior Welterweight titles, the other “queen of boxing” Cecilia Braekhus issued a challenge to Holm via her Facebook page.

In a two minute video Braekhus the WBC, WBO and WBA welterweight champion asks Holm to make the fight happen.

“I’m officially calling you out,” says Braekhus. “Don’t you think it’s been enough talk now. Let’s just make this fight happen. The fans want it, the media want it and I know for sure that I want this fight.”

Braekhus also goes on to compare her and Holm’s first fight against another fighter that recently threatened the pound for pound female boxing throne, Anne Sophie Mathis. A highlight of Holm being knocked out by Mathis in their first encounter is followed by a highlight of Braekhus staggering Mathis in her unanimous decision victory over the frenchwoman.

Braekhus also brings up comments made by Holm’s promoter Lenny Fresquez about her during a presser promoting the Holm-Braekhus I fight. In the video Braekhus paraphrases Fresquez, ‘Cecilia is not in the same league as Holly Holm,’ which is then followed by video of her being announced the victor over Mathis.

A date and location is even given by Braekhus for the highly anticipated superfight between her and Holm; Las Vegas next July.

“Let’s find out who’s the best female fighter in the world,” says Braekhus. “I’ll see you in Las Vegas.”

The full video of Braekhus calling out Holm can be see on Facebook at:
[youtube id= “ViSlWYCSHbs” width=”600″ height=”350″]