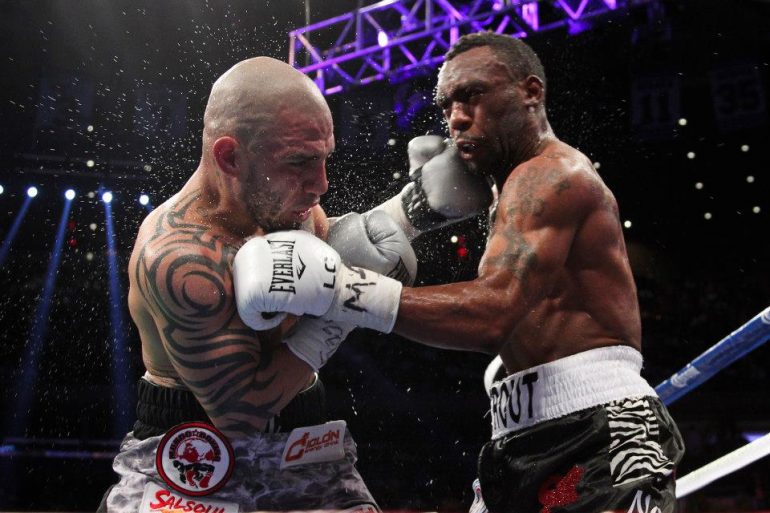 The passionate pro-Cotto crowd, most of them Puerto Rican decent roared in anticipation as the former world champion was introduced. After all, it was a building where Cotto held a seven and 0 record.

The relatively nationally unknown Trout was greeted by a chorus of boos as he was introduced.

Early in the fight the southpaw Trout, established his jab –a tool which he uses more than any other fighter in the super middleweight division– to set up his power shots to the body and hooks up stairs.

His dominant start immediately took the crowd out of the fight.

It was in round three that Cotto, began to close the distance between he and Trout allowing him to land huge power shots. Primarily the the left and right hooks. His flurries would also get sporadic rises out of the crowd.

As the middle rounds progressed, the sneaky orthodox veteran was able to make some of his shots look more effective than they actually were. Cotto was able to accomplish this by either stepping on Trout’s lead foot or by beating the champion to outside foot positioning, forcing him to stumble over his leg after the following shots.

The second half of the fight was a completely different story as Trout once again began to box from a distance using his five inch arm length and four inch height advantage. This forced Cotto to take the action but Trout beautifully picked his shots and escaped many of Cotto’s advances by slipping out low to his right avoiding the over the hand right.

Cotto continued to land some big shots but none as clean as the ones earlier in the contest and struggled to land over the top left hands due to Trout’s shoulder-roll defense from the southpaw stance.

Surprisingly, in the latter stages of the fight new sections of Trout fans would emerge and become boisterous as it was obvious that Trout was controlling the fight.

Both fighters slugged it out for the last 15 seconds of the fight and left to a standing ovation in what a was an entertaining contest.

As ring announcer Jimmy Lennon Jr. read the scores of 117-111, 117-111 and 119-109 looks of concern spread throughout press row as to say “Had they really robbed Trout that bad?” and “The fight was much more competitive than that” were wiped away when Trout was announced as the winner.

With the victory New Mexican fighters improve their record to 4-0 in world championship fights at Madison Square Garden.

The other three victories include: Bob Foster’s 4th round knockout of Dick Tiger on May 24, 1968 (New Mexico’s first world title) wiinning the WBC and WBA light heavyweight titles, Bob Foster’s victory over Frank DePaula on January 22, 1969 for the same titles and Johnny Tapia’s victory over Manuel Medina on April 27, 2002 winning the IBF Featherweight title.