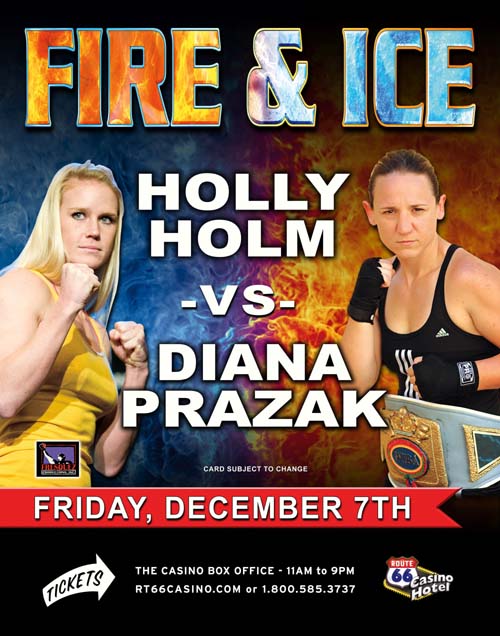 This afternoon it was announced by Fresquez Productions, that Myrian Lamare (20-3. 10KOs) has been forced to pull out of her Deccember 7th contest against Holly Holm (31-2-3, 9KOs) due to a should injury. In to replace Lamare will be Australia’s Diana Prazak (11-1, 7KOs).

“Lamare sent us X-rays and medical records of her injured shoulder,” Holm’s promoter Lenny Fresquez said in a statement. “It’s frustrating because we’ve already spent a lot of money promoting Holm vs. Lamare II but we’re fortunate to have a great fighter like Diana Prazak step-up to fight the best pound-for-pound women’s fighter in the world, Holly Holm. Diana deserves a lot of credit for accepting that big challenge and I know she’s coming to pull off an upset of Holly.”

A featherweight, Prazak will be jumping up two weightclasses to challenge Holm, who herself is moving down from welterweight to strife for the International Boxing Association and World Boxing Federation light welterweight titles.