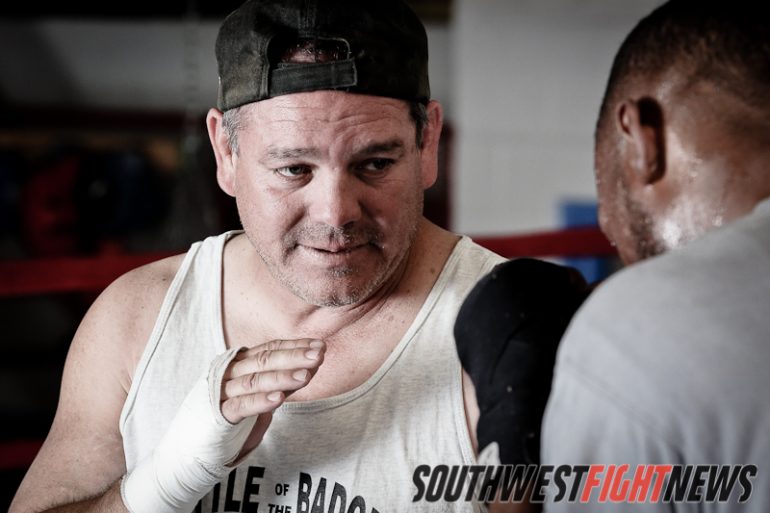 On Saturday afternoon, a ceremony was held at the American Legion Hall Post 28 in Roswell, New Mexico to induct 10 new members to the New Mexico Boxing Hall of Fame.

The event’s master of ceremony was Jerry D. Martinez, who serves as the chairman for the New Mexico Boxing Hall of Fame. At the start of the event an honorary 10-count was held in memory of Albuquerque boxer Flory Olguin Sr., former world champion Carmen Basilio -both who passed away early last week- and for former heavyweight world champion Joe Fraizer who died of cancer in November of 2011.

Burke turned professional in 1981. He would win 11 of his first 12 fights by knockout and would eventually build his undefeated record all the way up to 18 wins and 0 losses.

His first career loss would come to Charlie Brown, an Illinois prospect at the time with a record of 22 and 0. The majority decision awarded to Brown, in Burke’s hometown, was seen by many as controversial.

In 1985, with a record of 19 and 1 Burke, would take on 22-year old, former WBC Super Featherweight Hector “Macho” Camacho, who came into the fight with a stellar record of 24-0.

Burke, would take on training after retiring in 1985. He would eventually lead his fighters to amateur state and national championships. In 2011, Burke coached Austin Trout to both men’s first professional world championship, taking the Interim WBA Super Welterweight title from Rigoberto Alvarez.

Of his induction into his native state’s hall of fame Burke said, “It’s very humbling and I’m very honored that [my] peers would recognize [me]… I am very, very proud and happy.”

Burke is also a member California Boxing Hall of Fame to which he was inducted to in 2011.

(Our full interview with Burke by clicking here or below)

There were also three life time achievement awards handed out at the reception. The recipients of this award were 89-year old Raymond Analla Sr. and posthumously Sammy Burke and Willie Hall Sr.

For those interested in donating to the New Mexico Boxing Hall of Fame, checks can be sent to 2300 Stoneham Albuquerque, NM 87120. Please make them payable to New Mexico Boxing Hall of Fame. All proceeds are placed into a checking account located in Roswell and help pay for awards and the ceremony.The hall’s chairman Jerry D. Martinez can also be contacted via email at jstar5051@q.com

ALL ACCESS: Cotto vs. Trout Premiers Tonight on Showtime