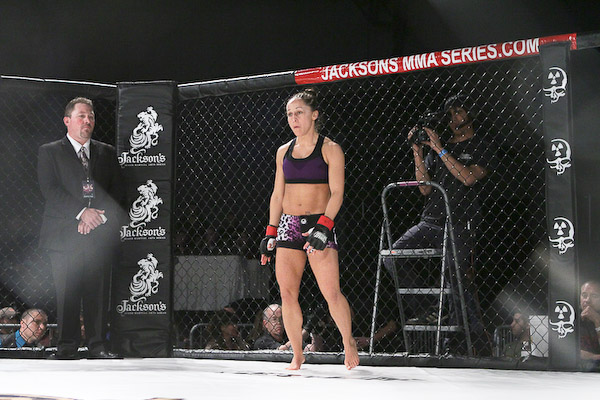 Earlier this evening Jackson’s-Winkeljohn’s MMA’s Jodie Esquibel (2-0) announced via her Twitter account that she has signed a contract to fight with Invicta Fight Championships.

Her contract includes a three-fight deal where she will partake in the organization’s atomweight division.

With the contract, Esquibel joins her teammate Michelle Waterson, as the only two Jackson’s-Winkeljohn’s MMA fighters to sign with the all female participant organization. Invicta FC was founded at the beginning of 2012 and has already had three very successful events.

Both of Esquibel’s MMA career victories have come on the Jackson’s MMA Series. A promotional circuit based out of her hometown of Albuquerque, New Mexico. In her last fight, at Jackson’s MMA Series 7, she was able to outclass a much taller Amy Riehle, on her way to an easy unanimous decision victory.

Esquibel is also a professional boxer with 13 career fights. A career which impressively includes a draw against current two-time world champion and top ten pound for pound fighter Ava Knight.

It is possible that Esquibel will make her debut with the promotion on the Invicta FC 4  card which is planned to take place sometime in January at an unnamed venue.